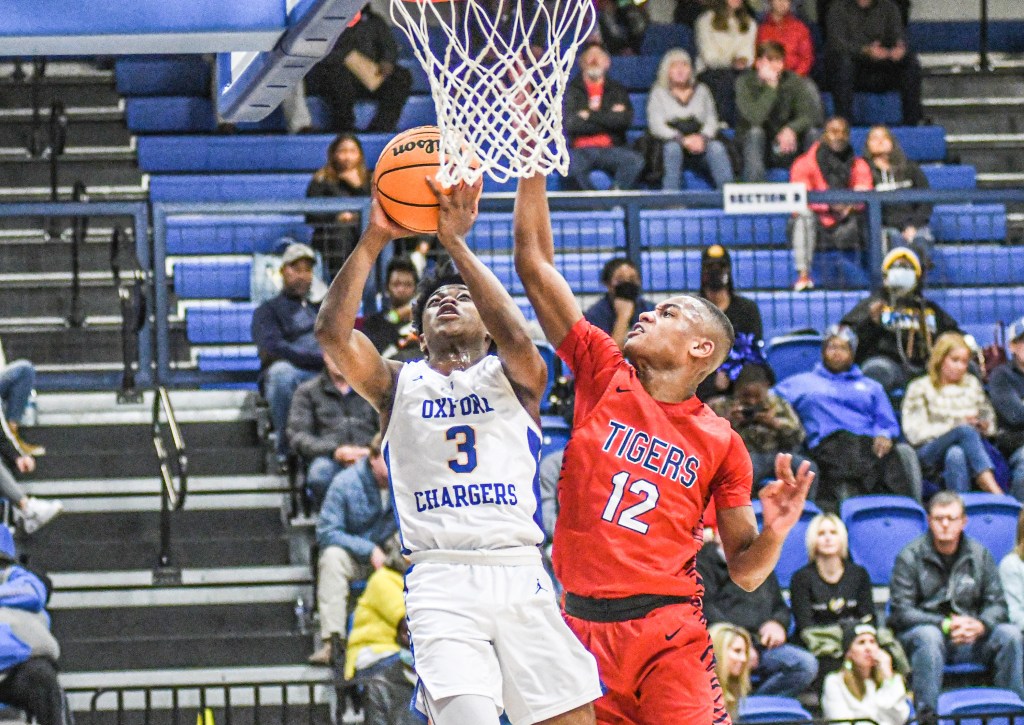 For the first eight minutes of Saturday’s senior night matchup with South Panola, the OHS boys basketball team could do little wrong on the offensive end and with open looks. The rest of the way wasn’t as easy, but the Chargers did just enough the rest of the way to fight off the Tigers 56-47 to close out the 2021-2022 regular season with their region tournament around the corner.

After hot shooting starts for DJ Davis and Baylor Savage early allowed the Chargers to close out the opening quarter on a 20-2 run, the Tigers slowly but surely chipped away at the deficit while letting their opponent make mistakes to get back in the game.

“South Panola is a layup and free throw team. I felt like for three quarters, we let them get those points, getting them below the baskets and to the line,” OHS boys basketball coach Drew Tyler said. “I wasn’t pleased with our decision making, by fouling in the open court. We liked that we scored in runs, but we’d shoot ourselves in the foot and put them at the foul line for easy points. Even though we had the lead, would could never really push them out and have a breather.”

The Tigers cut the deficit to eight to go into the locker room down 30-22 and later cut it down to four going into the final eight minutes. Oxford had an early surge in the fourth quarter and led by as much as 11 at one point, but South Panola kept making things interesting despite a bit of foul trouble. In the end, Davis led the Chargers with 21 points while the seniors Baylor Savage, Omari Frierson and Jacquez Elliot combined for 31 in their final regular season home game.

“These three seniors have been an anchor for our basketball program. We’re going to try and extend the season as long as we can for them and their teammates,” Tyler said.

The Chargers will face No. 2 seed Tupelo in the opening round of the Region 1-6A Tournament as a No. 3 seed. Tip-off is set for 8:30 p.m. at Tupelo High School.

Earlier Tuesday evening, the girls basketball squad flipped the script from their 16-point beating at South Panola in December and had their best offensive output of the season in a dominant 72-43 win over the Lady Tigers to finish regular season play.

The 72 points marks a season-high for the Lady Chargers as nearly everything went right offensively, finding easy lanes to the basket and scoring a handful of open three-point shots.

“This was sweet, beating a 6A team on senior night, a quality South Panola team,” OHS girls basketball head coach Cliff Ormon said. “This group, I’ve told people, are great kids and come to work every day. You wouldn’t know that we were on a losing skid with the way they come to practice and compete. It was awesome to see those smiling faces in front of their family and friends.”

Early on, it was the South Panola that came out swinging, jumping out to a 7-0 start before the Lady Chargers countered with a 7-0 run of their own to tie the game at 16 at the end of the opening quarter. Oxford ramped up the half-court pressure, forced turnovers and capitalized at the other end to go into the locker room up 35-21. The game plan kept working as the lead would only widen from that point on.

“We got down early, and that goes to show you the things these kids did, even more so tonight, once we hit a few shots, they never stopped,” Ormon said. “We’ve been doing different things all year trying to get a spark, it happened tonight. We were able to get those steals, but make buckets on the other end. That’s something we haven’t done well at times this year. Always makes a coach look smart when they make those.”

The Lady Chargers will be the No. 4 seed when they face off against Tupelo in the opening round of the Region 1-6A Tournament at Tupelo High School. Tip-off is set for 7 p.m.