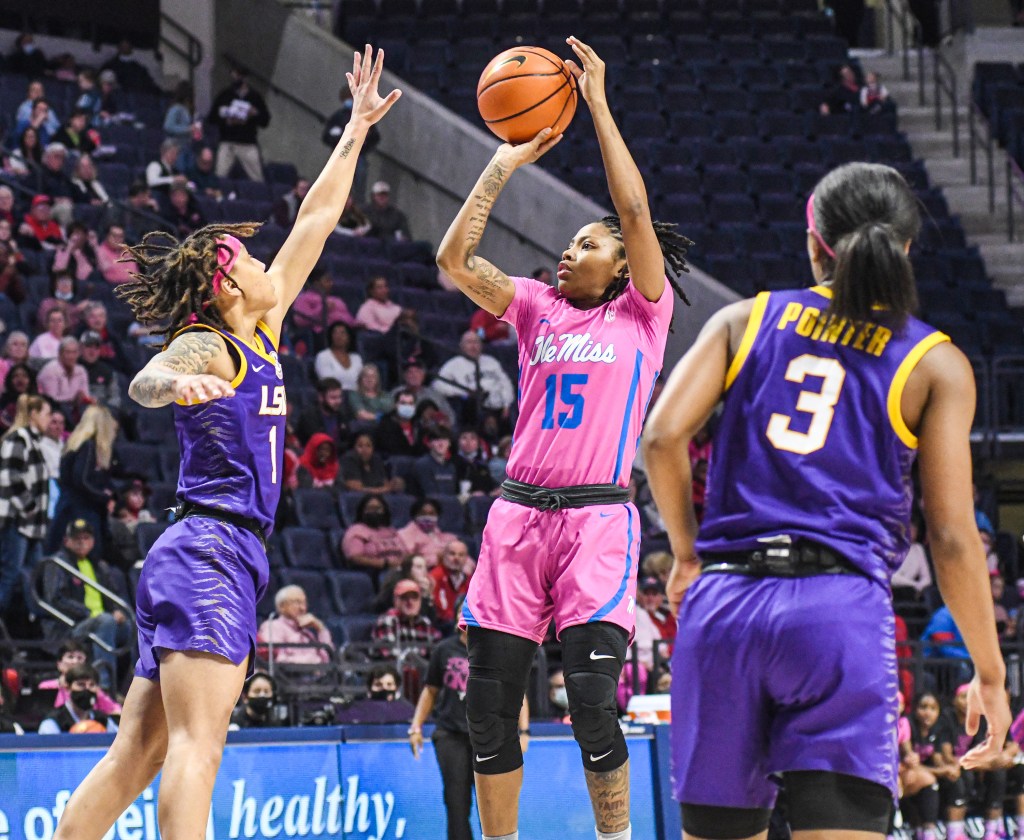 OXFORD, MISS — Unable to get into an offensive rhythm all night, the Ole Miss women’s basketball fell 68-64 to No. 15 LSU at home Monday.

The Rebels were out-rebounded 50-39 in the game, giving up 17 offensive rebounds that turned into 11 second-chance points.

Head coach Yolett McPhee-McCuin looked dejected postgame, lamenting the fact that her team did not execute the gameplan she drew up.

McPhee-McCuin said her team’s energy was not at the level it needed to be, citing a lack of motivation to box out and assert themselves on the glass.

“I thought our activity as far as crashing the boards was just poor,” she said. “There was a lot of standing around and watching, not swimming around. I thought their posts did a good job of boxing out and we didn’t try to swim around and give ourselves second or third-chance opportunities. I thought that hurt us.”

Ole Miss played well on the defensive end, holding the top offense in the SEC to 37% shooting from the field. They defended the three point line better than they have all season, running shooters off the line and holding LSU to just two attempts from beyond the arc.

They struggled to keep the off the free throw line however, sending them to the charity stripe 28 times, including 18 in the second half.

“We took away the three but that’s why we didn’t want to foul,” McPhee-McCuin said. “Had we not fouled, now they don’t have points from the free throw nor the three, now it’s a low-scoring game.”

The Rebels were also unable to get anything going on the offensive end, going 26-65 from the field and just 2-12 from 3-pt range. They struggled to move the ball effectively against LSU’s defense, generating just 13 assists while turning the ball over 12 times.

“Right now, offensively, we’re struggling to score when we don’t move the ball and trust [each other] and get what we need,” said McPhee-McCuin.

Senior center Shakira Austin did not look herself in the loss. The national player of the year candidate took only 10 shots in the game, failing to assert herself on the offensive end like she has all season.

McPhee-McCuin said she was disappointed that her star did not find others ways to impact the game as LSU limited her scoring.

“Kira is going to, in order for us to win these games, going to have to be a facilitator and going to have be okay with that,” she said. “That’s tough for someone that wants to score, but she has to say ‘okay I can’t take a bunch of shots, but I can be a defensive stopper, I can figure out how to help my team on the defensive end.'”

Coach Yo added that she was frustrated Austin did not show consistent effort on the defensive end, citing it as the reason for her benching in the third quarter.

“You saw me pulling her a lot, it wasn’t because of offense it was [because] defensively, she just wasn’t locked in like we needed her to be,” McPhee-McCuin said.

Austin took responsibility for her lack of effort after the loss, noting that she has to be engaged on every possession to put her team in a position to win.

“Defensively, I feel like I took too many plays off. I got to do better with that,” Austin said.

The defeat marked the third loss in the past four games for Ole Miss, who started the season 17-2 before reaching the toughest stretch of their schedule. Each of the three losses came at the hands of ranked conference opponents.

McPhee-McCuin said the tough stretch provided an opportunity for her team to learn from some of the best squads in the country, adding that the experience will benefit them in the postseason.

Ole Miss has a much-needed week off after playing 10 games in 32 days. McPhee-McCuin said her team struggled in recent weeks facing opponents coming off bye weeks while they fought through a long, difficult section of their schedule.

“We keep getting these teams coming off of bye weeks… now we get a bye week and we’ll regroup, rest and come back and be ready to finish up,” she said.

The Rebels (18-5, 6-4 SEC) will have Thursday off before heading back on the road to face Mississippi State in Starkville on Sunday.