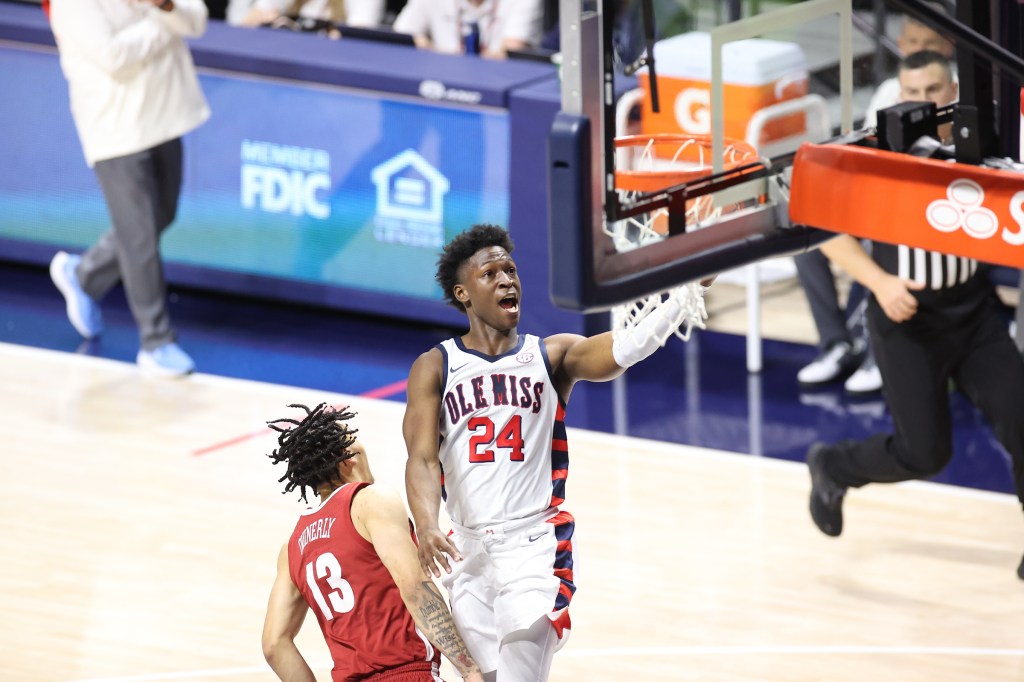 OXFORD, MISS — The Ole Miss men’s basketball team fell 97-83 to Alabama Wednesday night despite putting on their best offensive performance of the season to date .

“Alabama had been struggling from three, [they went] 3-30 against Kentucky, tonight they didn’t. That was kind of the team that went to Seattle and beat Gonzaga, just made shot after shot,” said head coach Kermit Davis.

Sammy Hunter provided a lift for Ole Miss off the bench, knocking down back-to-back threes before finishing a put-back dunk that put the Rebs up 10 with 8:51 remaining in the first half.

“I thought Sammy gave us a lift. We played him at the four and he made some pick-and-pop shots,” Davis said. “It was good to see Sammy come in and make a couple plays.”

After Ole Miss went up by double-digits midway through the first half, Alabama closed the period on a 27-6 run, knocking down six three-pointers and opening up an 11-point lead of their own.

Davis, who has stressed the importance of closing halves well all season, said he was frustrated with his team’s defensive effort down the stretch.

“Same thing we’ve been seeing. Like I said, 38 at the half is plenty at home. We were up 11 or 12 at one time, we just couldn’t guard them, couldn’t keep them out of the paint, couldn’t do anything with Quinerly,” Davis said. “We had a plan of hedging ball screens, the whole thing, and they made some deep, deep shots. Shackelford’s been one of those guys that’s been struggling, he didn’t struggle tonight.”

Ole Miss’s leading scorer showed out in his first start since Dec. 21. Joiner recorded 33 points on 12-20 shooting, including 6-10 from deep. The performance was his highest scoring output in an Ole Miss uniform, and tied Vanderbilt’s Scottie Pippen Jr. for the most points in SEC game this season.

His six made three’s marked a career-high, as the junior looked comfortable in his second game since undergoing back surgery on Jan. 13 that sidelined him for three weeks.

The Oxford native knocked down his first four shots of the night, looking confident pulling up from deep as well as driving to the hole.

The Crimson Tide shot 60% from the field and 63.6% from three-point range, getting whatever looks they wanted against a lackluster Ole Miss defense.

The Rebels failed to play with urgency on the defensive end, ducking under screens and allowing Alabama’s shooters to get plenty of easy looks from outside.

“I thought Matt [Murrell] and Jarkel didn’t come out with real aggressiveness on the ball. It was almost like we were on our heels, and we didn’t dig in,” Davis said. “They had 23 uncontested threes against Kentucky. They went like 1-23. It was just one of those things tonight, they were comfortable, [Jaden] Shackelford made a couple early, then their bigs, who hadn’t shot it great, started making shots and they just got in a rhythm.

Shackelford posted a career-high 30 points for the Tide, shooting 10-17 from the field and 8-13 from beyond the arc.

The junior from Hesperia, Calif. lit it up from deep, knocking down catch-and-shoot looks, step-backs and dribble pull-ups on a night where seemingly every shot found the bottom of the net.

The Rebels dropped their ninth game in their last 13 outings, falling to 12-12 on the season and 3-8 in conference play. They now sit at 13th in the SEC, a half-game behind Missouri and two games up on Georgia.

Davis’s squad has a soft part of their schedule coming up, with games against Missouri on Feb. 12, South Carolina on Feb. 15 and Georgia on Feb. 19. They will need to win all three games if they want any chance to improve make a run and improve their seeding in the SEC tournament.