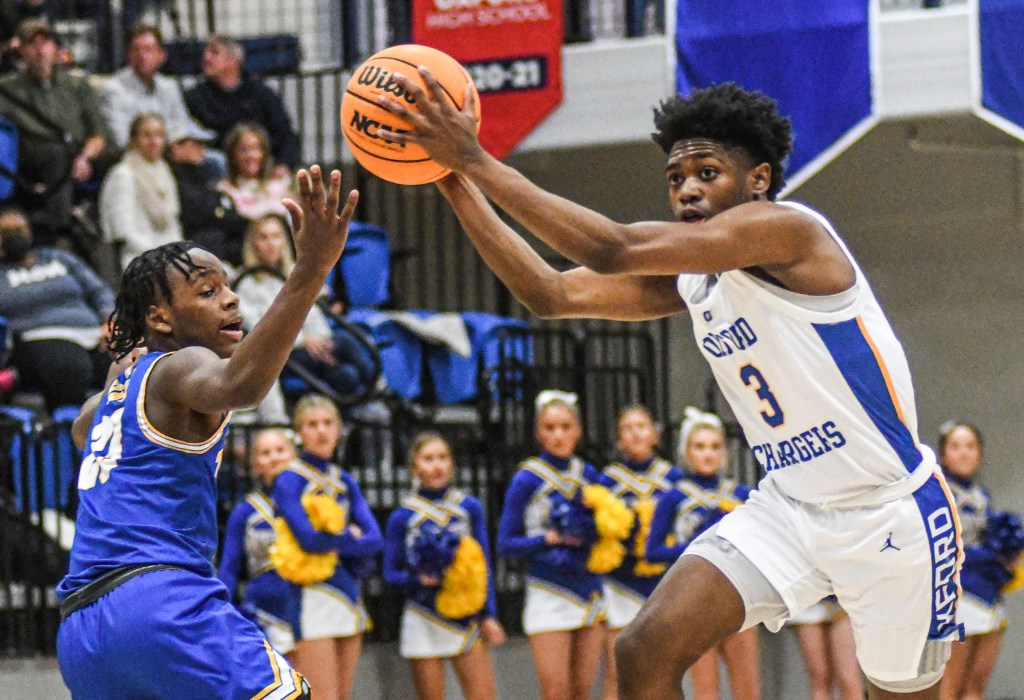 TUPELO, MISS — The Oxford High School boys basketball team defeated Grenada on Friday to secure a spot in the state playoffs, riding a dominant offensive performance to an 83-74 victory.

Oxford shot 67.5% from the field and 53% from three as a team, knocking down seemingly every shot they took to secure their 24th consecutive playoff appearance.

They jumped out to an early lead thanks to an impressive first-half performance from senior forward Baylor Savage.

The six-foot-three Savage went 4-4 from three-point range in the first half, continuing his hot shooting streak from the past week.

“He’s done that two out of the last three games. When he’s shooting from that deep and that consistently, it just really spreads a defense to where D.J. Davis and [Jacquez] Elliot and [Omari] Frierson can get to the goal,” head coach Drew Tyler said.

Star guard D.J. Davis was also a key contributor in the first half, scoring 13 points and dishing three assists.

“We were scoring from a lot of different spots with a lot of different people, so that was definitely a good feeling,” said head coach Drew Tyler.  I think a lot of kids are stepping up here at the end of the year that have been semi-consistent, but now some of them are having some home run games.”

Oxford was unable to take control of the game despite their hot shooting, as they were unable to keep Grenada off the glass, 17 offensive rebounds that led to plenty of second-chance points.

Rebounding has been a glaring weakness this year for an undersized Oxford team that struggles to keep opponents off the offensive glass.

“We’re not boxing out. As the shot goes into the air, we’re not putting a body on a body, and we’ve got to do that. When you don’t do that they get second shots,” said Tyler.

Their inability to pull away nearly came back to bite them in the second half, as Grenada was able to narrow the gap to one with 3:30 remaining in the third quarter. Tyler’s squad managed to find a response however, closing the quarter with a 12-2 run to push their lead out to double-digits at 61-50.

Grenada did not go away quietly in the fourth, catching fire from beyond the arc and cutting the lead back to seven with just under three minutes on the clock.

With time ticking away, Grenada opted to send Oxford to the line, fouling the Chargers early and often in an attempt to get back in the game.

Tyler’s squad, who came into the game shooting 53% from the free throw line, was up to the task tonight, knocking down 14 of their final 15 free throw attempts to put the game on ice and secure the win.

“They answered the call, and it was a variety of players that went to the line to do it,” Tyler said. “With me maxing them out on minutes and those guys being in there and playing so many full court minutes, the free throw line was where we could catch our breath and score at the same time. That was a win-win situation for us.”

Elliot led the way for Oxford, posting a career-high 25 points on 7-8 shooting. The senior point guard went 10-10 from the free throw line, answering the call for his team when it mattered most.

“It was big for him. He’s had to wear a lot of different hats for this team, being the point guard and the leader on the court,” said Tyler. “He’s having to throw his body around around the goal because we lack size, and he’s having to do that from 25 feet out, getting to the goal. Tonight he was able to kinda validate everything he’s been doing by making those free throws. He’s got a right to stick his chest out and have a little swagger about him, have that confidence going into Tuesday’s game.”

Savage finished with 19 points on 6-7 shooting while hauling in a team-high seven rebounds. Davis finished with 17 points and five assists after fouling out with just over two minutes to play.

Oxford moves on to face Center Hill in the first round of the state playoffs. The Chargers will tip off against Mustangs at 7 p.m. on Tuesday in Olive Branch.