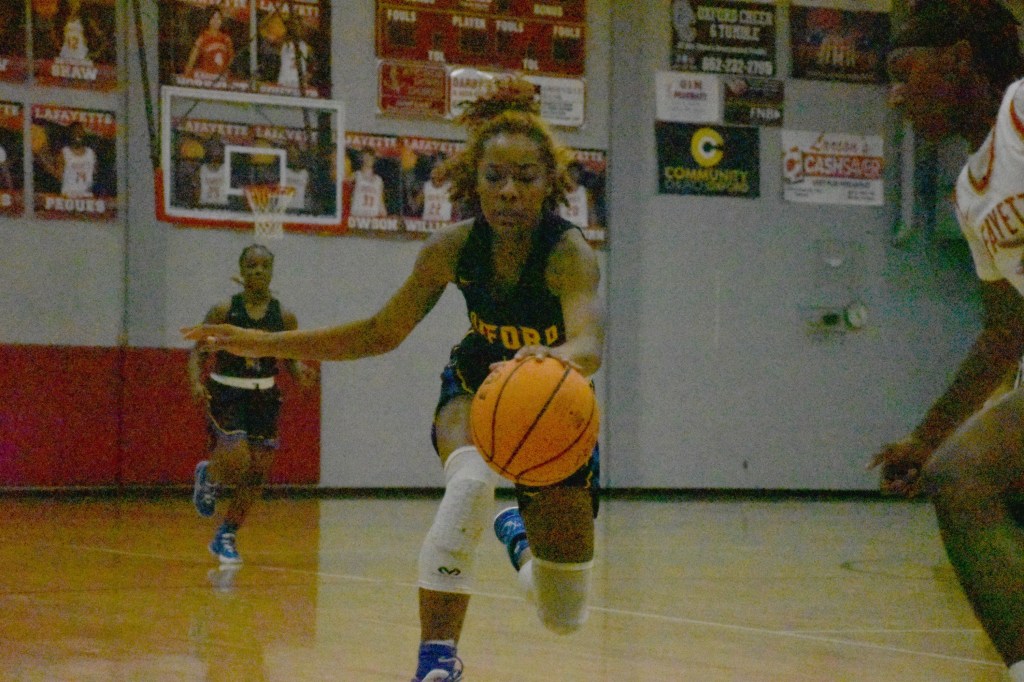 Oxford's Hannah Johnson reaches for a loose ball against Lafayette on Jan. 18, 2022. The Chargers defeated Grenada 51-38 on Friday to secure a playoff spot. (Jared Redding)

The Chargers struggled to get going early, managing just seven points in the first quarter. They had trouble getting good looks at the rim, settling for perimeter jumpers and tough floaters in the lane.

Grenada went up 13-7 midway through the second quarter, prompting Oxford head coach Cliff Ormon to use his second timeout of the game. Ormon’s squad responded with an 8-0 run to retake the lead, capped off with a pull-up three from the right wing by Labriyah Parker.

After Grenada tied the game on a putback layup, Oxford closed the quarter with a 9-0 run, using their smothering defense to create turnovers and get easy looks in transition.

“That second quarter I thought we responded well. It was kind of a slow start but once we hit a few shots.. we kinda got a lead and I thought we played really well,” Ormon said.

Oxford locked down defensively in the third quarter, surrendering just two field goals and opening their lead up to as much as 21.

“I thought we stayed with our plan,” said Ormon. “We rotated a lot of players off two of their scorers and they did a great job, and then we rebounded really well out of the back of the zone. We were playing a little tricky defense, trying to mix it up, and that’s the key to that is you have to have some girls willing to rebound. It was a total team effort.”

Grenada closed the third with a 5-0 run to cut Oxford’s advantage to 39-23 entering the final quarter, but Oxford’s Olivia Waddell scored back-to-back baskets to start the fourth quarter, pushing the lead back out to 20.

Grenada slowly worked their way back into the game in the fourth quarter however, trimming the deficit to as little as seven in the final two minutes. Oxford managed to shut the door on the comeback in the closing moments, knocking down six free throws in the final minute to secure the win.

“The last two minutes got a little nerve-wracking when they cut it to eight, but again I’m proud for these kids,” said Ormon. “Making the playoffs is something you want [every year]. We’ve been there the last two years and we wanted to keep that streak going.”

Parker led the way for Oxford, posting a double-double with 14 points and 12 rebounds. The junior wing finished 5-9 from the field, including 2-3 from beyond the arc.

Waddell played one of her best games of the season, recording 11 points and five rebounds while playing stifling defense on Grenada star Lauren Harges. The five-foot-eight junior picked Harges up full court, denying her the ball at every opportunity.

“She gutted it out tonight,” Ormon said of Waddell. “She’s a really tough kid dealing with a migraine issue. We didn’t know if she would play in the second half, but she wanted to be out there.”

The win secured a spot in the state playoffs for Oxford, who will play Desoto Central in the first round on Monday.