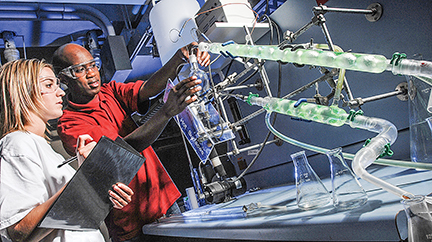 Biomedical Engineering students will soon be among those using chemical engineering laboratories such as the one pictured here. Classes in the new degree program begin Fall 2017. Photo by Kevin Bain.

BME is a fairly new department at Ole Miss. What began as a program in 2017, grew to an entire department by 2021. Last October, the university unveiled an entirely new floor in Brevard Hall dedicated to innovative research and advancements in a field that combines technology with medicine.

Waddell came to the School of Engineering in 2013 and was temporarily housed in the Electrical Engineering Department before there ever was BME at Ole Miss. The professor witnessed the growth of BME from the very beginning.

“The chair their— Dr. [Ramanaryanan “Vish” Viswanathan]— he had designs of maybe incubating a biomedical program,” said Waddell. “That happens to be my Ph.D. I was kind of the perfect person to craft the initial application that you have to submit to the IHL.”

What followed the application was years of politicking and back and forth before they were allowed to proceed with a BME program.

“At that point you’re kind of running on fumes,” he said. “You don’t have the faculty in place so you create a program and you’re borrowing expertise from different areas on campus to create enough substance to make it worthwhile for some young person.”

According to Waddell, the biomedical engineering field is incredibly broad so the university narrowed their expertise down to three areas: biomolecular engineering, biomedical devices and bioinformatics.

Despite the head start, BME did not truly have a home. Faculty members had to be temporarily housed in the electrical engineering or chemical engineering department until they found their place in Brevard Hall.

Until then that day in 2021, BME worked on hiring faculty, teaching the ever-increasing number of students and a budget that would allow the department to access more resources.

“We’ve found our footing and there are lots of good things happening,” said Waddell. “I think we are well positioned because the state is realizing that this kind of biotech is an opportunity— not just to move Mississippi forward— but to help the entire region.”

Five years into BME and the department is getting ready to graduate their third class later in spring. The program is the third-largest department in the School of Engineering, with more than 60% of its undergraduate students women and nearly half enrolled in the Sally McDonnell Barksdale Honors College.

The BME Department is producing undergraduates who go off to continue their education in graduate school, enter into medical school or work in biomedical industries such as medical device design, biotechnology and pharmaceutical research and sales.

“I know where all of my kids go after they graduate,” said Waddell. “Even the ones that were interested in medical applications may be from other more traditional engineering departments.”

Although Waddell is happy for students who find success upon graduating, he said a key issue is that they find opportunities elsewhere and not within Mississippi. Those students leave to work around the South in cities like Memphis, Birmingham or Atlanta.

“They were leaving,” he said. “They don’t stay. So the brain drain that some people were arguing wasn’t happening or not? We knew it was happening.”

According to him, the state has recognized this problem and now state legislators are focusing on how to retain young potentials and their workforce instead of losing them to surrounding states.

“One way to stop it is to help create an environment where a young person might be willing to stay,” Waddell said. Economic investment from Mississippi combined with efforts from BME and other departments and potentials looking for business opportunities equals growth and retention.

BME’s new spaces which feature an active learning room, an innovation lab and a fabrication lab will give the department the chance to recruit more students and give students hands-on experience. The department even brought on board Troy Drewery, Professor of the Practice, to give students insight on how BME works in the real world.

“Admittedly we are kind of like the shiny penny right now and eventually the honeymoon phase wears off as you get to work,” said Waddell, “but the number of admitted students for the fall looks really good and we hope we have the opportunity to hire more faculty.”

It’s progress all around at Brevard Hall. Waddell has several reports of new opportunities the department gets a chance to be a part of like a research center, Center of Diagnostics, Design, Devices and Biomechanics (D3B). The D3B will create a place where people in the medical field or small business owners can come with their idea and vet it or incubate the idea through the center.

Engineering faculty will work with other university professors and industry experts to create an innovative learning model to benefit the people of Mississippi and beyond. Students are also producing provisional patents that could be filed through the Office of Technology which is exciting everyone from the BME faculty to the Chancellor.

“The ideas the young people came up with are potentially valuable and if you can help find them some short-term, small business loan support instead of leaving the state or maybe going to graduate school, [they can] take the two years to see what they can do,” Waddell said. “If it gets traction, they can start a company and stay put. It’s that kind of cycle and germination that lets us hope that we can move forward.”

Waddell said the BME Department is experiencing its honeymoon phase.

“It’s an exciting time right now,” he said. “We’re crazy busy but that’s normally when you have the most fun.”

Like the growth seen in the Silicon Valleys of the South— Austin, Texas and Memphis, Tennessee— Oxford is growing rapidly and the University is growing alongside it bringing those growing pains and although it may worry the people who worry for the city’s future, Waddell chooses to inject some positivity into his outlook.

Student enrollment in BME is increasing and they have a need for more instructors, but these signs are positive.