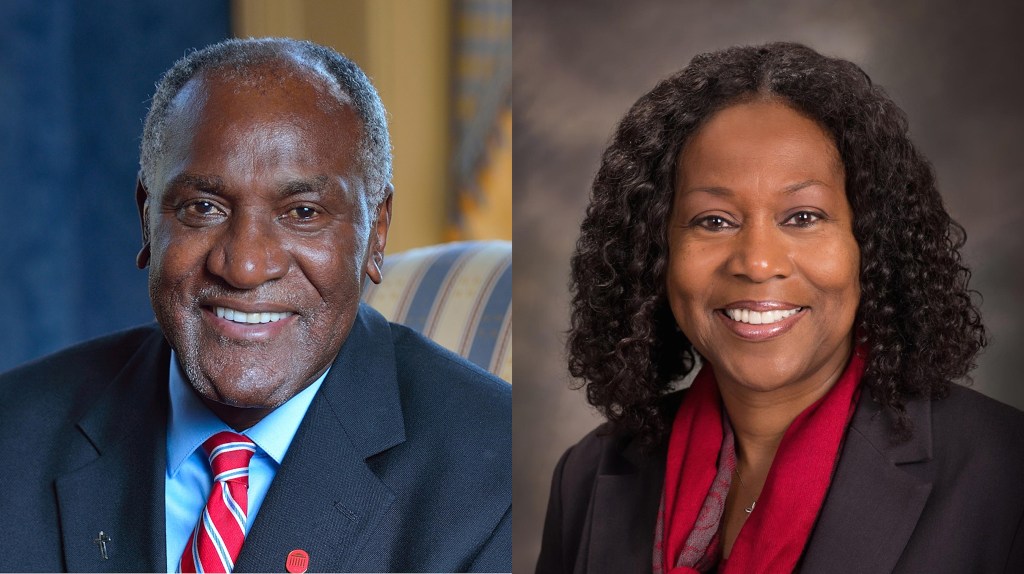 Don Cole (left) and Peggie Gillom-Granderson (right), two University of Mississippi icons are reflecting on what it means to be Black at the university, and how that has changed over time as part of this year's Black History Month celebration.

Two University of Mississippi icons are reflecting on what it means to be Black at the university, and how that has changed over time as part of this year’s Black History Month celebration.

The 2022 Black History Month keynote, “I Am UM,” is scheduled for Wednesday (Feb. 16) and will feature Donald Cole and Peggie Gillom-Granderson in conversation about their time at the university – their struggles, victories and perspectives for the next generation of students. The event is set for 6 p.m. in the ballroom of the Gertrude C. Ford Ole Miss Student Union.

“We’re two individuals who share different, and yet similar, experiences – both at the University of Mississippi,” said Cole, a former student activist who returned to Ole Miss as a caring mentor and administrator for decades. “It’s very important, I think not only because of the timing in terms of Black History Month, but the timing of it in terms of where we are as a nation and where we are as individuals.

Cole was a student at the university until being jailed and expelled in 1970 for protesting the treatment of Black students on campus. He later returned as a mathematics professor and became an administrator in the 1990s before retiring as assistant provost in 2019.

Gillom-Granderson is the Ole Miss women’s basketball team’s all-time scoring and rebounding leader, with 2,486 points and 1,271 rebounds. As an assistant coach, she was a part of 14 NCAA tournament appearances, including four trips to the Elite Eight.

She was also assistant coach on the United States’ 2000 Olympic gold medal-winning team. She serves as the women’s director for the Fellowship of Christian Athletes at UM.

The two are also UM building namesakes. Gillom-Granderson is the first Black person to have a university building named in her honor, the Gillom Athletics Performance Center, and Cole, the second, with the Martindale-Cole Student Services Center.

Cole said he is excited to share the stage with Gillom-Granderson because he has been a fan of hers since she first stepped on the court wearing red and blue, but also because he’s grown close to her and her family over the years.

Cole and Gillom-Granderson were asked to participate because of their unique perspectives and close ties to the university, but also because of their proximity in time and place to today’s student body.

“Picking folks who have made history here and being able to discuss the context and richness of their impact here is something I’m excited to share with the campus,” said EJ Edney, assistant vice chancellor for diversity and inclusion. “I think we can be tempted to reflect on our far-gone past and we associate magnitude of impact with distance in time.

“But we have giants among us, living and breathing history. We should honor them, learn more from them and elevate them.”

The winners of the Lift Every Voice Award, presented by the Black Faculty and Staff Organization, also will be recognized as part of the Black History Month keynote event.

For more information on cross-cultural and identity-focused events, including Black History Month events, check out the All In All Year calendar.