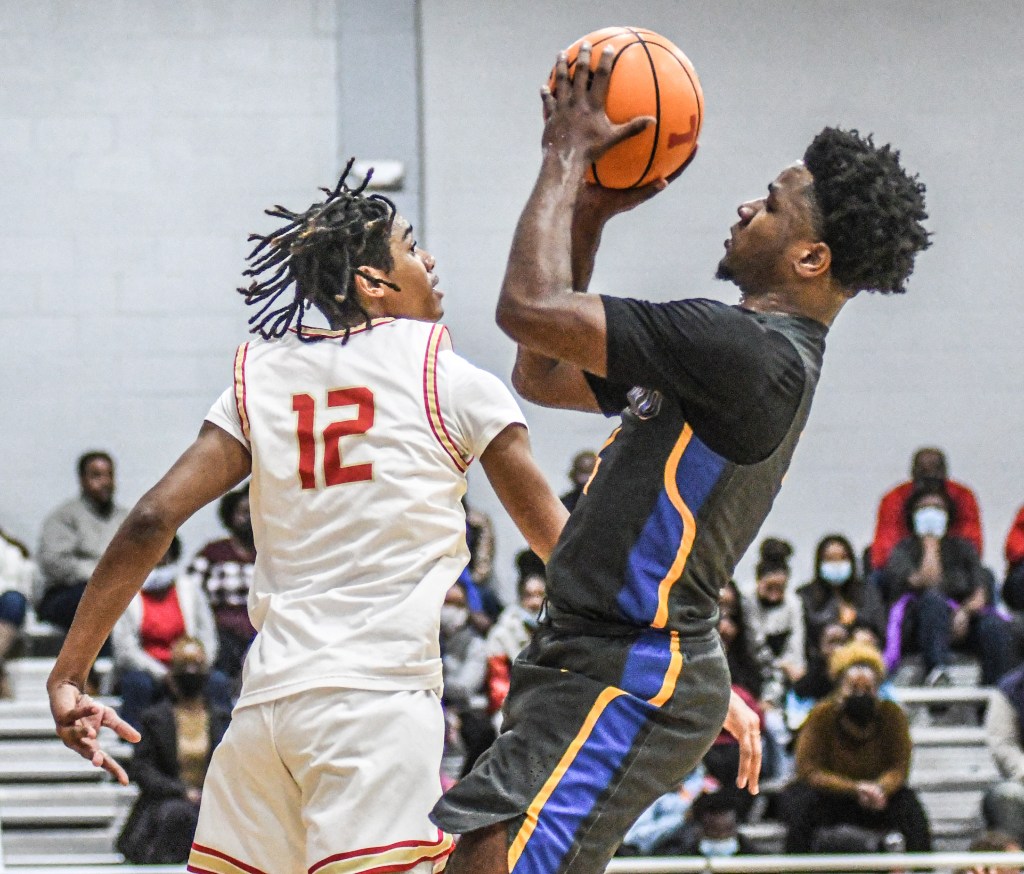 Oxford High’s Omari Frierson (4) rises for a shot against Lafayette on Tuesday, Jan. 18, 2022. The Chargers fell to Center Hill 92-59 Tuesday in the first round of the MHSAA Class 6A playoffs. (©Bruce Newman)

“Block out! What are we doing?”

Oxford head coach Drew Tyler repeated that phrase over and over again Tuesday night as his team was blown out in the first round of the MHSAA Class 6A state playoffs by a Center Hill team that dominated the rebounding battle, using their superior size and athleticism to punish the Chargers on the glass all game long.

Oxford surrendering a season-high 92 points to Center Hill as they struggled to contend with the Mustangs’ size and skill.

Tyler said he was frustrated with his teams’ performance on the glass, noting that their rebounding is a weakness they work on every week in practice.

“We lift weights every week as part of our practice time, but we’re not putting a body on a body so it’s just not carrying over to the basketball court. People are just beating us to the ball,” he said. “It doesn’t take a whole lot of talent to block out, it takes some heart and hustle.”

The Chargers were able to hang with Center Hill for much of the first half before turning the ball over three times in the final minute of the second quarter, allowing the Mustangs to extend their lead to double-digits in the closing seconds.

“We cut the lead to nine right before halftime, and then we just had some, what I’ll call ‘head scratchers,’ and they go into halftime up 13,” Tyler said. “Then we got it back to nine again and it’s deja vu, we don’t block out, they get second shots. We were already having trouble stopping them on first shots, and then they get second shots and it just snowballed on us.”

Oxford failed to get anything going offensively against a stifling Center Hill defense. The Mustangs keyed in on Oxford’s shooters and prevented open looks from the perimeter all night, holding the Chargers to just 28 points in the first half.

“They had a good gameplan, they were guarding Baylor [Savage] on the perimeter. When they’re doing that it takes that threat away as far as being able to kick it to Baylor because they didn’t help off of him,” Tyler said. “When we played Grenada, their gameplan was centered around Miles Luber and that freed Baylor up. Tonight they did not play much help side defense, they were on us, and they were quick enough to do that without playing help side.”

D.J. Davis was only reliable source of offense for the Chargers, recording 25 points on 10-23 shooting. The sophomore guard also led the team in rebounds with nine, hauling in more offensive boards than the rest of the team combined.

Senior point guard Jacquez Elliot also played well in his final game in an Oxford uniform, posting 11 points and getting to the free throw line a game-high seven times.

“His best game is getting to the goal. I would’ve definitely wanted more defense out of all of them, but he seemed to have heavy legs tonight,” said Tyler. “I put a lot on his shoulders as far as being our point guard, being our quarterback on the floor and leader, and he’s done a heck of a job leading this team from that point guard spot.”

Oxford eventually fell 92-59, ending their season in the first round of the playoffs for the second time in three years.

The Chargers got to the playoffs thanks to their outstanding perimeter shooting down the stretch, but their lack of rebounding and poor defense proved too much to overcome against a talented Center Hill squad that was able to create open looks nearly every time down the floor.

“We were able to get to this first round by outscoring people, but to get to Jackson, to get to the Coliseum and make a run at the gold ball, you got to lock in and play defense. We haven’t done that a number of times this year,” said Tyler.