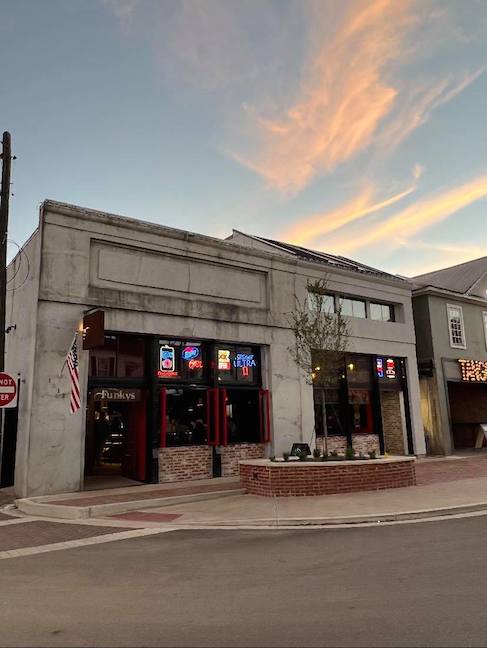 Properties around the historic Courthouse Square are dealing with stormwater draining issues in the face of construction and renovations including Funkys, a popular food spot on the Square. (Photo: Funkys' Pizza & Daiquiri Bar)

The Oxford Planning Commission tackled two cases of variance requests due to issues with stormwater management with different outcomes on Monday night: one postponed until further developments and one approved.

The first issue facing the board was a variance request for the stormwater ordinance from the applicant Corey Alger of Alger Design Studios who represented Tim Smith, the actual owner of the 208 South Lamar Boulevard property. The property was the former site of several restaurants over the years and the building that formerly stood there was torn down in March 2020 after a demolition request was submitted.

The owner plans to build a new structure smaller than the original structure on the site but have discovered issues with stormwater detention. Alger said the key issue with the property is the lack of storm sewer inlets or detention areas connected to the property.

“There is no city stormwater on Harrison Avenue anywhere,” he said. “It doesn’t matter— all the way to the bottom of the hill to all the way on the other until you get to 9th or 10th. There’s no stormwater anywhere near the site and never has been.”

According to Alger’s submitted documents, the nearest storm inlet is 160 feet away from the property and underground utilities would make it incapable for them to connect to a storm water discharge pipe. Alger said the variance would be applicable in this case because the structure size does not demand a stormwater detention area and it would be impossible or burdensome to find a way to do so anyway.

“You can discharge to the street level,” said Chairman JR Rigby after Alger’s presentation. “The city will allow you to do that. There is nothing in [the] code that would prevent you from doing that. You have not presented us with any design that would do any detention of stormwater.”

Alger stated, in his opposition to Rigby’s request, that the property is physically incapable of connecting to the city’s system and that any changes would modify the city right-of-way.

“The city told me I had to detain and discharge it and the only way to discharge it would be below grade,” said Alger.

Despite Alger’s arguments, Rigby stated the board could not move forward on the request as it is.

“I would recommend that you discuss with the city engineer what the discharge requirements are because right here on the face of it, there is nothing for us to approve or deny,” said Rigby. “There is no variance request because there is no design proposed. We are talking about the applicability of the Stormwater Code right here and, as far as I can see, there is nothing at this site that would prevent a full application of the Stormwater Requirement.”

The board motioned to postpone Alger’s variance request until the commission’s meeting in March.

The issue of stormwater discharge reared its head again when Tom Howorth of Howorth Architecture, representing Lee Harris of Funkys, came forward with a variance request for stormwater management of the stormwater ordinance.

Howorth directly addressed Alger’s presentation and the overall issue of infrastructure on the Square while presenting his case.

“Infrastructure has been developed for 150 years and it hasn’t been an issue until 15 or 20 years ago and we have a lot of those,” said Howorth.

Howorth said he discussed with City Planner Ben Requet and City Engineer Reanna Mayoral the impracticality of proving stormwater infrastructure for a 1,000 square foot building. It was decided that Funkys would have to detain and siphon water from the rooftop.

However a variance is needed after changes to Funkys’ roof were not made with the engineers’ plans in mind and a different drain was added to the site in an effort to comply with code, making the original stormwater management plan moot.

“The reality is what constrained the roof area on which the engineer’s calculations were based was the addition of a roof which is code requirement and the mounting of an exhaust pipe,” said Howorth. He stated it would be overly burdensome for builders and engineers to undo the construction already in place just to comply with code and risk the integrity of the roof.

The existing stormwater management facility does not work as originally designed, but the planning commission staff acknowledged that it was better to have one than none at all.

“Philosophically, my position when we started this project, I thought stormwater detention should be a city effort not an individual property owner effort in the Courthouse area,” he said. “Every piece of property is enormously valuable not just in monetary value to the owners but to the public use of these buildings.”

Rigby noted that the team’s case is a similar issue to Alger’s but highlighted their efforts to follow the code as accurately as possible.

The Planning Commission motioned to approve the variance for Funkys subject to the staff’s conditions.