The New Class: Intro to Builder and Backers’ 2022 Winter Cohort 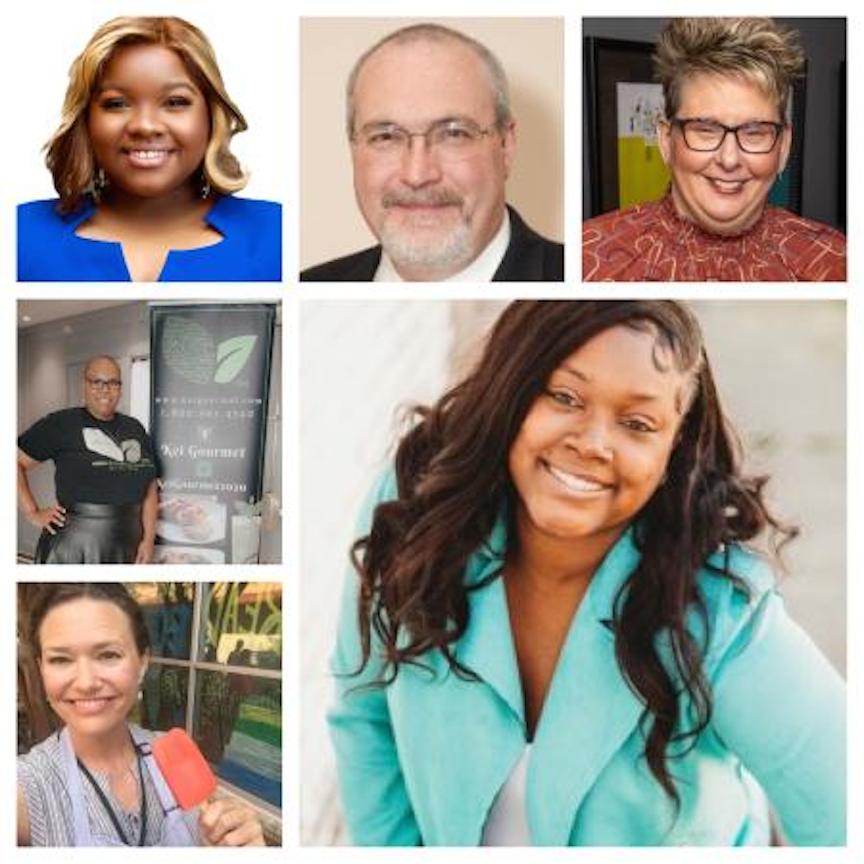 Ten local entrepreneurs are looking to change some part of their home for the better through the Idea Accelerator program, a partnership between Heartland Forward and Builders & Backers.

The Idea Accelerator program puts builders through a rapid-pace, 90-day, virtual program to turn their ideas into a reality fueled by up to $5,000 in non-dilutive Pebble Funds. After the success of the first round last fall, the program doubled the number of entrepreneurs for double the impact.

Oxford’s Builders are currently undergoing workshops before they begin putting their ideas into action, but, during the commencement session, each one presented their platform and how they plan to solve big problems in the community.

Stacey Sanford’s story for her platform began when she went into the Black hair care aisle of a big box store for a friend and found herself outside of her element.

“I realized that there are things that I don’t know about people I care very much about,” she said. Sanford could not understand what the hair care products did or how they worked for people of color and it was not for lack of trying on her part. Sanford even called close friends or loved ones for help but understanding lay just outside her reach.

The decision to create educational workshops targeted at White families with children of color was pivotal as Sanford’s family was getting ready to foster their own non-White child.

“The problem I want to solve and discuss is how people learn, what they learn and their willingness and ability to learn,” said Sanford. “Not only as a parent but maybe as a grandparent, a caretaker or as a teacher and just start these conversations because there are tons of people willing to teach.”

For over 25 years, professional hairdresser and filmmaker Antonio Tarrell has provided expert service to his customers. Throughout the years, Tarrell found he could put his own spin on a technique people have been using for years.

With the recent addition of his signature cutting tool— a curved comb tool— it makes cutting and styling hair to the shape of the head much easier than with a straight comb.

“In that, I also came across hairdressers that wanted to produce their own products and tools,” said Tarrell. “I’ve learned throughout my journey how to do those things by consulting with people and teaching them how to market and brand themself on those items and techniques to try to make them become better entrepreneurs.”

By helping people develop their products and market themselves, he was inspired to apply for the Idea Accelerator program after not getting accepted in 2021.

Empowering others to make the most out of their ideas is Don Jones’ mission. Jones, the Dean of Northwest Community College’s Oxford Center, has the idea to create a shared-use commercial kitchen for entrepreneurs to experiment with food and restaurant ideas.

“Not only for a buddy of mine and I who have a food idea that I think would catch on pretty quickly but to help others do the same things,” he said.

There are a lot of people who probably will not take over the food business but their ideas will certainly take off, said Jones. All it takes is access to the right resources.

“They just need to be empowered to do it,” said Jones. “So, I’m hoping to learn through this program and then to help others do the same thing.”

Rori Herbison said she is blessed to have had guardian angels in her life. A former sports journalist and essayist, Herbison recognizes her parents’ role in her life as a pivotal and necessary one.

“ … We all need angels,” said Herbison. “I’m blessed that it is my parents who have been such guiding forces in my life, but I recognize that it’s not always parents. It can’t always be parents.”

Herbison said there are times where people can be angels to you and where you can be an angel for others. Her platform, based on an individual’s responsibility towards another, seeks to give young and emerging artists the angel they need.

“As someone in the field I know some of these regional markets and regional cohorts are starting to be enveloped by the national,” said Herbison. “So, I think at a state level we need to be doing things and that’s really the work I want to investigate during my time in the cohort.”

Chef Keiona Jackson of Kei’s Gourmet has been feeding mouths through her private chef and catering business and through her job as executive chef at The Marriott, but for the past couple of years Jackson has made it her mission to an underserved community in Oxford.

“Here in Oxford I created an organization called The Village and for the last three years I’ve been feeding the homeless in the community,” she said. Before becoming executive chef, Jackson never realized there was a homeless community but finding out afterwards motivated her to do all that she could to help them.

It was hard to find organizations that were helping and Jackson identified that know one knows about them because they are hard to find.

“My idea is to find, to collaborate with these other organizations and gather the resources to get the funding and the word out so people can know there are resources here in Oxford,” said Jackson. “You don’t have to go outside the community to get what you need.”

Andi Brice is a self-proclaimed over achiever. An Ole Miss freshman majoring in Public Policy Leadership, a dedicated volunteer to the university’s Eco Club and the president of the Bonner Program for scholars, Brice isn’t afraid of working hard or facing a challenge.

“It’s a great social space and I’d go there to hang out but … focusing is already challenging enough so when you add 100 people around my age that are also talking with their friends, the music and the concession, this was my chance to do a calm atmosphere for people that want to focus,” said Brice.

The university library closes at 5 PM and coffee shops close around dinner time, students have a lack of quiet or sustainable options.

“My idea was to basically cultivate a late night study cafe in the Oxford community, preferably at The Powerhouse,” said Brice. “We could have interactive art exhibits and have a way to form a community of people who struggle with focusing on their school work just like me.”

Author Tanisha Bankston has kept her silence for a long time, but now she is taking a stand to be a voice for the voiceless. As a survivor of rape, child abuse and domestic violence, Bankston is working to become an activist by starting a program to promote healing from the trauma of sexual assault and domestic violence through connecting survivors.

“I want to work with women and children and I want to tell them that there is hope,” said Bankston. Through her project, she hopes to connect with other activists who are doing similar projects in their own communities.

It is also important for Bankston to reach out to teen moms and bullying victims, both statuses she experienced, and make resources more available to them.

“I want them to know that just because you’ve gone through things doesn’t make you what you were,” said Bankston. “You can begin your healing journey and turn from a caterpillar into a butterfly and you can be someone else.”

Danny Klimetz is able to capture a moment in someone’s life story through his photography and videography. Whether he captures the happiest day of your life or the moment you rediscover what your life means, Klimetz is there to share in your story.

Now Klimetz wants to give the opportunity back to the Oxford community to share their own stories.

Klimetz said he doesn’t have to be the one to share it. It’d be better to give the person the tools to tell their own story without having to hire Klimetz himself. The individual who is working without the backing of a non-profit organization can churn out their own content and push out to social media.

“It’s kind of two-fold,” said Klimetz. “I want to share my tools to help provide for this stuff but I also want to start teaching and sharing so other people can have this toolkit.”

Elizabeth Speed has been serving up Oxsicles one stick at a time to satisfied customers since June 2020 after taking over for the founder Lauren Klimetz. It may be a small operation but the guilt-free, vegan delights can be found at local stores like the Chicory Market and The Lily Pad in Oxford and at the Oxford Community Market where Speed sells them from April to November.

Although Oxford is a foodie town and its taste buds are open to exploring whatever flavors land on it, Speed recognized that there is no public space for cooks to use.

“Right now in Oxford I know that there are a lot of food entrepreneurs, but unfortunately we do not have a co-op commercial kitchen where we can all share our ideas and our space to advance our businesses,” said Speed.

A lot of food vendors have to make their food in their own homes which leaves them subject to different regulations than vendors who use commercial kitchens.

“What I wanted to do with my idea is to be able to create a kitchen space for people who are creating these great things they’re selling at the farmers market or selling privately, but so that they can make it in a commercial kitchen so they won’t be relegated to the cottage food industry,” said Speed.

As a former banker, Danielle Maury understands the truth behind the saying, “Money makes the world go ‘round.” Maury has witnessed teenagers and college students fall victim to credit card companies in their need to pay for school supplies, their next meal or even a place to sleep.

“There are not enough foundational financial literacy programs for children in high school and middle school that will prepare them for a life after graduation,” said Maury.

Maury will work with the University of Mississippi School of Business to develop a game program that will teach children important financial skills and literacy while they earn prizes like stocks, bond certificates and cash for winning.

“ … Not only will they learn but have it to where their parents can learn as well,” she said. “Not only are we getting a generational impact, we’re getting a community impact.

To Maury, anything about money should be the basic building blocks in a child’s life so that they have all the tools they need when they become adults. Financial literacy can teach them how to budget, manage accounts and stay out of debt.

“Money is kind of like general manners,” said Maury. “You can never learn enough and you can never do enough. Money is a life-learning process just like the basic learning structures in math, science or English.”

Keep your eye out for Oxford’s Builders as they gear up to finally put all their plans into action on March 4. For more information on the Idea Accelerator Program, visit www.buildersandbackers.com/idea-accelerator.