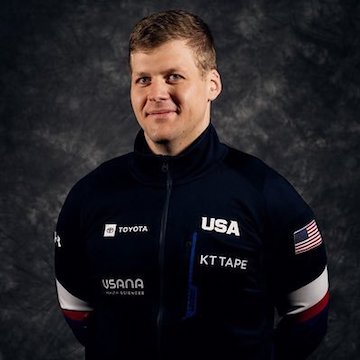 Andrew Stuart has never taken “no” for an answer.

The Oxford native is one of the hottest names in sports training, providing high-level performance analysis for the premiere athletes in the world.

Stuart is the head strength and conditioning coach for the U.S. Olympic speed skating team, and revolutionized the way skaters evaluate on-ice performance. He helped the U.S. land the gold medal in the 500 meter race at the Beijing Winter Olympics, their first gold in the event since 2006.

His ascension to the national team was rapid, as his combination of athletic experience and academic knowledge opened doors in an industry built on connections.

“I know for a fact that he was told ‘no’ a bunch of times at a bunch of different places, but he just persevered,” said Oxford High School strength and conditioning coach Jason Wilfawn.

Stuart, who played football at Oxford High School, was a walk-on fullback at Ole Miss from 2008 to 2011. As a member of the football team, he showed a keen interest in coaching and the science of strength conditioning.

Stuart interned for Wilfawn after graduating from the university, specializing in athletic performance for Olympic sports. He helped coordinate workouts for football, baseball, women’s soccer, track and field, softball and volleyball.

The Oxford native spent a year as an intern at Ole Miss before deciding to take his talents elsewhere, serving brief a brief stint as an intern at the University of Memphis before landing a job as the lead human performance specialist with the U.S. Air Force at Barksdale Air Force Base in Bossier City, La.

Stuart worked with the basketball, baseball and weightlifting teams, and also served under Dr. Pierce at the USA Weightlifting Center for High Performance and Development. He also worked as an adjunct professor within the Kinesiology department, furthering his academic pursuits as he continued his coaching career.

After spending over a year in Shreveport, he landed a job as a strength and conditioning intern at the Chula Vista Elite Athlete Training Center in San Diego. Stuart worked directly with track and field athletes prior to the 2016 Olympics in Rio De Janiero, using his expertise to help the premiere athletes in the world improve performance with his intensive training programs.

Stuart was not finished with his academic career however, opting to take a position as a graduate assistant at the University of New Mexico while he pursued his PhD in kinanthropology. He worked closely with the school’s track and field and cross country teams to enhance performance, and even worked with 2020 1,500 meter bronze-medalist Josh Kerr.

Stuart finally settled into his current position in June 2018, when he was named head strength and conditioning coach and performance science coordinator for the U.S. Olympic speed skating team. He made an immediate impact in Salt Lake City, using the Dynamic Strength Index to revolutionize the way US speed skaters evaluate strength and power.

For his work with the speed skating team, the U.S. Olympic and Paralympic Committee selected Stuart for the 2019 Doc Councilman Award. The prestigious award is presented annually to a coach who uses scientific techniques or innovative methods to enhance performance for U.S. Olympic athletes.

Stuart is finishing his first Winter Olympics as a coach for the national team, helping the U.S. to their best speed skating performance since 2010. Americans under his tutelage claimed gold in the women’s 500 meter and bronze in the women’s 1000 meter and men’s team pursuit.

Stuart is just getting started with his coaching career, and the future is nothing for bright for the kid from Oxford.