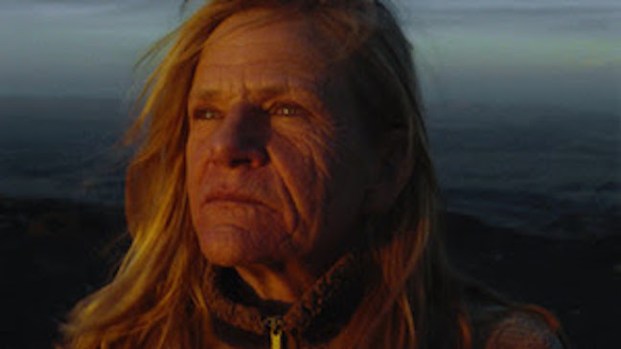 Pictured: Dale Dickey in "A Love Song" directed by Max Walker-Silverman. Country: U.S. Synopsis: Two childhood sweethearts, now both widowed, share a night by a lake in the mountains. 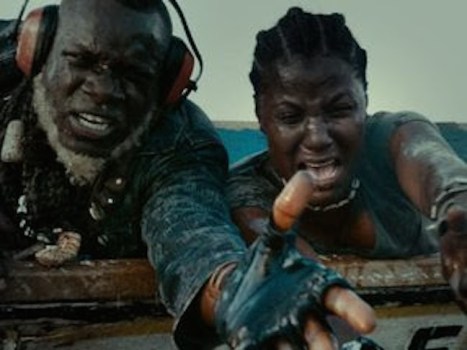 "Saloum" directed by Jean Luc Herbulot. Country: Senegal. Synopsis: Three mercenaries extracting a druglord out of Guinea-Bissau are forced to hide in the mystical region of Saloum, Senegal. 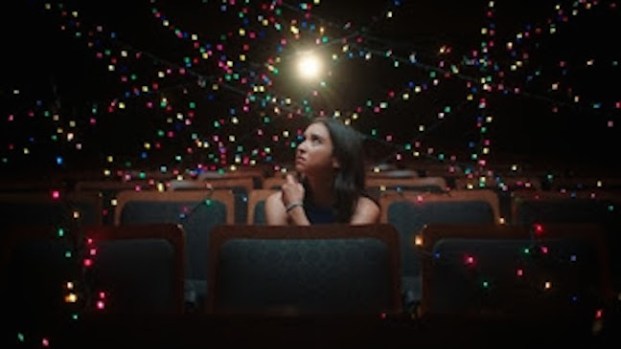 "Disfluency" directed by Anna Baumgarten. Country: U.S. Synopsis: After failing her final college class, Jane returns home to her family's lake house and--with the help of her friends and family--she comes to terms with the confusing trauma that derailed her senior year. 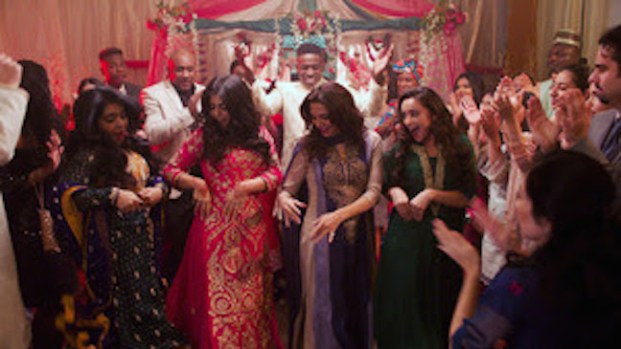 "Americanish" directed by Iman Zawahry. Country: U.S. Synopsis: Welcome to America: Where dreams come true...ish. A break from the traditional romantic comedy, Americanishhighlights different layers of womanhood as it intersects with cultural and societal expectations.In Jackson Heights, Queens, career-driven sisters Maryam and Sam and their newly-immigrated cousin Ameera must navigate the consistent and sometimes conflicting demands of romance, culture, work, and family. Serving both as a lighthearted reimagination of and critical divergence from the classic romantic comedy, Americanish tackles and celebrates the complex intersectionalities of womanhood by welcoming us into the world—with all its joys and tribulations—of these three marriage-aged women. 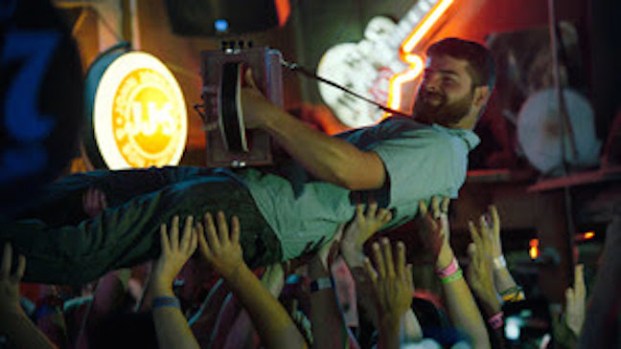 "Roots of Fire" directed by Abby Berendt Lavoi & Jeremey Lavoi. Country: U.S. Synopsis: Amidst shuttered rural dance clubs and encroaching globalization, five award-winning musicians push against stereotypes of the American South and move the music of their ancestors forward. But their fans are getting older and the language is fading away. Will their efforts be enough to save a dying community? 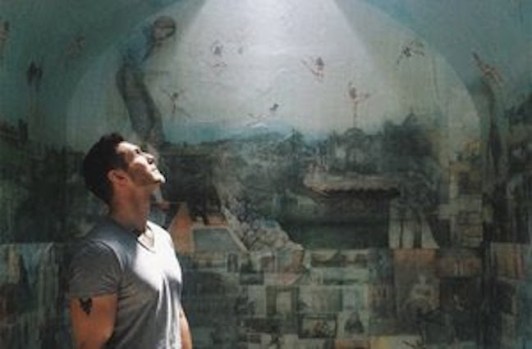 "Krimes" by Alysa Nahmias. Country: U.S. Synopsis: Krimes is a story of confinement and freedom, of loss and creation. While locked-up for six years in federal prison, artist Jesse Krimes secretly creates monumental works of art—including an astonishing 40-foot mural made with prison bed sheets, hair gel, and newspaper. He smuggles out each panel piece-by-piece with the help of fellow artists, only seeing the mural in totality upon coming home. As Jesse's work captures the art world's attention, he struggles to adjust to life outside, living with the threat that any misstep will trigger a life sentence. Leaning into his own identity as a convicted felon and celebrated artist, Jesse turns the spotlight on people still in prison, asking us to question surface representations, recognize overlooked beauty, and celebrate the transcendent power of art to connect us and elevate the human spirit. 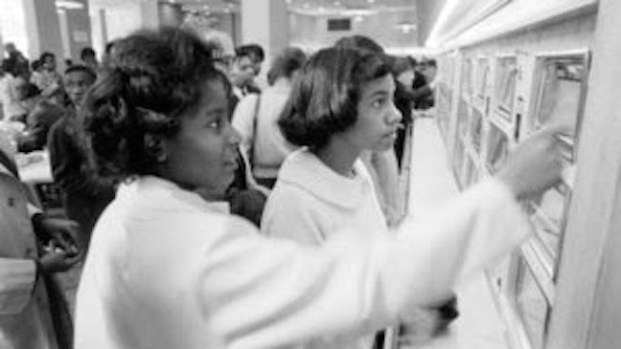 "The Automat" directed by Lisa Hurwitz. Country: U.S. Synopsis: Featuring an original new song written and performed by Mel Brooks, The Automat which premiered at the 2021 Telluride Film Festival, tells the 100-year story of the iconic restaurant chain Horn & Hardart, the inspiration for Starbucks, where generations of Americans ate and drank coffee together at communal tables. From the perspective of former customers like Mel Brooks, Starbucks founder Howard Schultz, Supreme Court Justice Ruth Bader Ginsburg, Secretary of State Colin Powell, the Horns, the Hardarts, and key employees - we watch a business climb to its peak success and then grapple with fast food in a forever changed America.

The 2022 Oxford Film Festival (In-Person on Mar. 23-27, Virtual on Mar. 27-Apr. 3)) announced the lineup of official selections for the 19th annual edition of the popular film festival which will bring back a hybrid presentation including screenings, parties, and special events.

The dynamic schedule will showcase 118 films, representing 18 countries, including 38 features (16 narrative and 22 documentary), 67 short films (narrative, documentary, LGBTQIA+, ambition and experimental, student, and Mississippi-based productions), and 13 music videos. Special events include a Secret Screening of a work-in-progress film, and a tribute to the late Bill Luckett, a beloved Mississippi film industry stalwart and a familiar presence at the Oxford Film Festival.

“We are excited to present this year’s films and special events to our local film fans here in Oxford, the state of Mississippi, and nearby in Memphis, as well,” said Interim Executive Director Jim Brunzell. “We have diligently built a program that include discovery titles, award winners, festival favorites from Venice, Toronto, Sundance, Berlin and SXSW film festivals, enlightening, innovative, and entertaining features and shorts that should inspire everyone to immerse themselves in the Oxford Film Festival world once again.”

Opening the Oxford Film Festival will be Hugo Sobelman’s documentary Soul Kids. The film focuses on Memphis’ Stax Music Academy. For two decades, the academy has continued the legacy of the legendary Stax Records, a soul label which was a refuge during the Civil Rights movement in the 60s. By learning and understanding soul music in after-school programs, the next generation of teenagers build a solid foundation on Black Americans’ legacy and create hope for their future.

Closing the film festival will be Max Walker-Silverman’s romantic drama, A Love Song.

The film stars Native American film legend Wes Studi and Oxford FF’s Breakthrough Acting Award honoree Dale Dickey as a couple, childhood sweethearts several years ago, who are now both widowed. They meet up at a campsite and reconnect, sharing stories, memories, and emotions during a night by a lake in the mountains.

One of Hollywood’s most coveted character actors, Dale Dickey forged a reputation for illuminating gritty, dark, and oftentimes damaged characters.

Following inspired performances onstage, including the Broadway production of “The Merchant of Venice” (1989) and the 2009 stage adaptation of “A Streetcar Named Desire,” Dickey has put together an enviable list of performances together in films like Sordid Lives (2000), Winter’s Bone (2010), Super 8 (2011), Iron Man 3 (2013), Hell or High Water (2016), and Palm Springs (2020), and on countless television shows like The X-Files, True Blood, Breaking Bad, and My Name is Earl.

Her role in A Love Song is a well-deserved lead in a feature that has been critically acclaimed since its debut at Sundance earlier this year.

Additional highlights among the narrative features include; Dan Mirvash’s festival favorite 18½ is a crazy ride involving a White House transcriber trying to overcome hippies, swingers, and nefarious forces in order to leak the 18½-minute gap in Nixon’s Watergate tapes; Iman Zawahry’s charming comedy Americanish set in Queens, where career-driven sisters Maryam and Sam and their newly-immigrated cousin Ameera must navigate the consistent and sometimes conflicting demands of romance, culture, work, and family; and the world premiere of Tara Thorne’s Canadian thriller Compulsus, about a woman whose taste for violent revenge might become short-circuited when she falls for a woman who abides by the law.

Anna Baumgarten’s Disfluency won Best Film at the Austin Film Festival. The film follows a promising language student who returns home without graduating due to a devastatingly emotional trauma that derailed her senior year.

Jean Luc Herbulot’s horror-thriller Saloum follows three mercenaries who run into deadly threats they never imagined while attempting to extract a drug lord out of a mysterious region in Senegal.

Carl Andress and Charles Busch’s The Sixth Reel stars the latteras a down-on-his-luck movie collector whose discovery of a legendary lost film sends him hurtling into an outrageous adventure. The film also stars Margaret Cho and Tim Daly.

Among the documentary selections are; Lisa Hurwitz’s The Automat, which premiered at the 2021 Telluride Film Festival, tells the 100-year story of the iconic restaurant chain Horn & Hardart, the inspiration for Starbucks, where generations of Americans ate and drank coffee together at communal tables – from the perspective of former customers like Mel Brooks, Starbucks founder Howard Schultz, Supreme Court Justice Ruth Bader Ginsburg, and Secretary of State Colin Powell.

T.J. Parsell’s Invisible: Gay Women in Southern Music explores the unsung story of the queer women behind some of country music’s greatest hits; and Alysa Nahmias’ Krimes from MTV Documentary Films, about artist Jesse Krimes, who secretly created monumental works of art—including an astonishing 40-foot mural made with prison bed sheets, hair gel, and newspaper, then smuggled out each panel piece-by-piece with the help of fellow artists. Clay Haskell and Dylan Nelson’s Mississippi Messiah looks at the surprising life and accomplishments of Civil Rights legend James Meredith, and Abby Berendt Lavoi and Jeremey Lavoi’s Roots of Fire will make its world premiere at the Oxford Film Festival, looking at five award-winning musicians as they push against stereotypes of the American South and move the music of their ancestors forward.

Highlights among the creatively themed and musically-infused parties and special events include; a “Pop Up Partnership” with Thacker Mountain Radio featuring Michael Farris Smith, as well as an “Opening Night Stax Records Party” following the Soul Kids screening on Thursday, March 24 at The Atrium at Mike Overstreet Properties (265 North Lamar Ave.) with a Live Performance from 926, Stax Music Academy Alumni Band; and a “Roaring 20’s Celebration” on Friday, March 25 at the same location, featuring a live performance from The Skid Rouges.

On Saturday, March 26, Oxford Film Festival will host a Filmmaker Roundtable and Songwriters in the Round, both at the Malco Pavilion Auditorium (206 Commonwealth Blvd.).

Later that evening, will be the “Casino Royale Party” at The Isom Place Oxford (1003 Jefferson Ave) with a Live Performance from The Bill Perry Trio. The always popular OXFF Awards will be celebrated as a brunch this year at The Lyric (1006 Van Buren Ave.) on Sunday, March 27.

The Oxford Film Festival would not be possible without the generous support from the following grants: Mississippi Arts Commission (MAC), the National Endowment for the Arts (NEA), South Arts, Visit Mississippi and Visit Oxford.

The Oxford Film Festival/OxFilm (OXFF) will require all ticket and badge holders to show proof of a completed COVID-19 vaccination regimen to enter any indoor screening or event held by OXFF. A negative COVID-19 test result will not be accepted. Mask-wearing is mandatory for all OXFF attendees indoors. The Oxford Film festival will continue to share updates as health guidelines evolve. For additional questions or assistance, please email info@oxfordfilmfest.com or call 877.560.3456 (FILM).

To buy passes or tickets or find more information, please go to: https://www.oxfordfilmfest.com/.