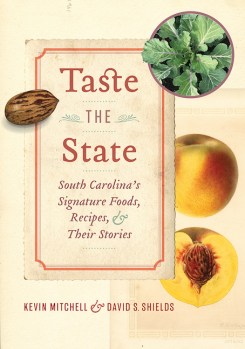 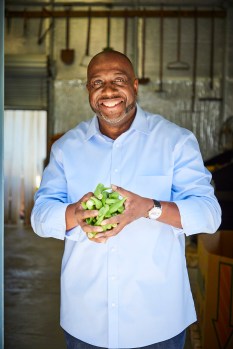 Chef Kevin Mitchell, who earned a master's degree in Southern studies from the University of Mississippi in 2018, spent months researching and writing about the foods of his home state for 'Taste the State: South Carolina's Signature Foods, Recipes, and Their Stories.' Submitted photo

Chef Kevin Mitchell hasn’t felt this kind of excitement since he held his finished master’s thesis at the University of Mississippi.

After months of research, writing and editing – much of it during the ongoing COVID-19 pandemic – Mitchell finally got to see a finished copy of “Taste the State: South Carolina’s Signature Foods, Recipes, and Their Stories,” which Mitchell co-wrote with renowned food scholar David Shields. The book was published late last fall by University of South Carolina Press.

“To finally hold the book in my hand was surreal,” he said. “After the time spent preparing the manuscript, taking photos, cooking food and many other things through the pandemic, it was great to have the finished product in my hands.”

Mitchell, who earned a master’s degree in Southern studies from UM in 2018, is a chef-instructor at the Culinary Institute of Charleston. While studying at Ole Miss, he was the SFA’s Nathalie Dupree Graduate Fellow and wrote his thesis on “From Black Hands to White Mouths: Charleston’s Freed and Enslaved Cooks and Their Influence on the Food of the South.”

Mitchell and Shields’ 230-page book is already in its second printing, and Forbes magazine named it as one of the best new cookbooks for travelers.

The Gourmand World Cookbook Awards also listed “Taste the State” as the U.S. winner and 2021 nominee for the global winner in the Tourism Food Book category in 2022. Gourmand selects one book per nation in each of its award categories; “Taste the State” was that book, and it will compete with all the other national winners for the world prize.

The book is more comprehensive than just a top 10 list and focuses on the signature dishes of South Carolina. The idea was a deep dive into the food of the Palmetto State, looking at historical recipes and providing a deep timeline of when things get introduced. For example, the root vegetables of the 19th century are not the same as the 21st century.

“We tried to keep the focus on the mission of the book: be entertaining and inspiring, put people in the kitchen to try recipes and not be overly academic,” said Mitchell, who was named a South Carolina chef ambassador in 2020.

They list 82 of the state’s most distinctive ingredients, such as Carolina Gold rice, Sea Island White Flint corn and the cone-shaped Charleston Wakefield cabbage, plus signature dishes, such as shrimp and grits, chicken bog, okra soup, Frogmore stew and crab rice, providing origin stories and tales of kitchen creativity and agricultural innovation.

It was easy for Mitchell to work with Shields, the Carolina Distinguished Professor of the English Language and Literature Department at the University of South Carolina and chair of the Carolina Gold Rice Foundation. Shields has authored numerous books, including “Southern Provisions: The Creation and Revival of a Cuisine” and “The Culinarians: Lives and Careers from the First Age of American Fine Dining,” and is the recipient of the SFA’s Ruth Fertel Keeper of the Flame Award.

“David locates people who reintroduce these ingredients into our world and then connects them to chefs like me,” Mitchell said. “It’s important as an instructor to get my students to understand how those relationships form.

“David sends me a box of peppers or corn from California to play with, and it inspires me to bring it to my students and hope they bring it to chefs they work for.”

According to the book’s preface, the publisher wanted “something that would be informative even to the most schooled local cooks and historians, but also interesting to the visitor and the general reader.”

Their research also involved combing through geneologybank.com, which has newspaper archives, census records and historical books.

“The process was overwhelming at times, which was due to the fact that many of the ingredients and dishes had so many entries in newspapers, so it was hard to decide what files were be used to actually write our entries,” he said. “It was, however, a really interesting way to research. I definitely would use that technique again.”

“Taste the State” is written in dictionary form, in alphabetical order.

“We focused on three things: tell people about the ingredients that were forgotten, focus on dishes synonymous with South Carolina and include dishes people would be surprised by, like asparagus or oranges,” Mitchell said. “When we turned in the manuscript, we had a list of 100 dishes/ingredients and realized we went too far.

One of the things that had to be cut was Madeira, which Mitchell says is one of his biggest regrets.

“So many times when we speak about alcohol in the South, we lean towards bourbon,” he said. “It was great to see that South Carolina had this great history tied to Madeira.”

While at UM, his thesis adviser was Catarina Passidomo, Southern Foodways Alliance associate professor of Southern studies and anthropology. It is exciting for her to see her former student thrive after graduation.

“Kevin is really thoughtful about keeping us apprised of his goings-on, and they’re always impressive,” said Passidomo, who is also graduate program coordinator for Southern studies. “His book project with David Shields is a meaningful and novel contribution to Southern food scholarship, and his perspective as a professional chef and preserver of culinary tradition provides particularly interesting insights.”

Mitchell’s experiences at the center gave him an understanding of how to become a better instructor, too.

“I have been able to use the techniques for research and writing in designing a new course called Southern Cuisine and Culture,” he said. “I have been able to add some of the readings from Dr. Passidomo’s foodways class into the curriculum, not only teaching students about the food but the topics centered around Southern food, as well.”