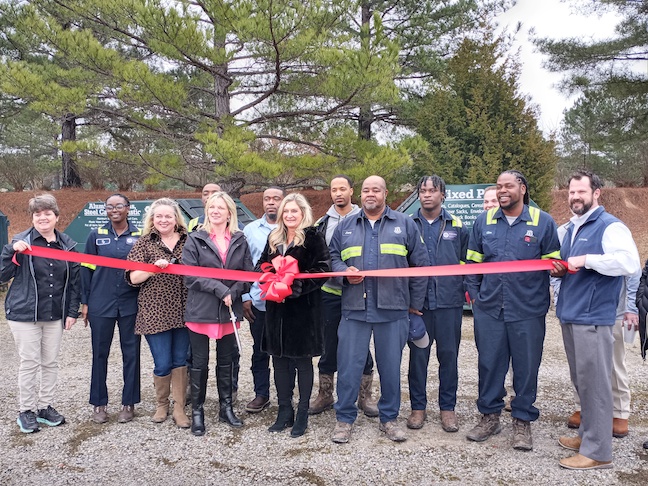 The city of Oxford has opened a new recycling drop-off center just off of Mississippi Highway 6 due to high demand from city residents.

A new recycling drop-off location had been in the works for two to three years, according to the city’s Recycling Coordinator Michelle Robinson. Oxford previously had three drop-off locations for residential use: one located on Molly Barr Road, a second on Highway 7 South and a third located at County Road 321.

“For about two or three years we have been trying to find a new location because the Wellsgate people wanted a drop off location near them,” said Robinson.

Environmental Services Director and former head of Recycling Amberlyn Liles stated that catering to the needs of the community makes it easier for them to participate.

“People wanted a location that more convenient to them because that’s the world we live in: convenience,” said Liles. “This will really help cater to the subdivisions on [the west] side of town as well as Batesville and Panola County. We’re just so thankful and appreciative to Cannon Motors for giving us this opportunity to have a joint private and government partnership.”

The residents at the West Gate subdivision are not considered city residents, but they’ve continually sought assistance from the city to make recycling more accessible. Now the new drop-off area is only one mile away from Wellsgate and is accessible to other people from Lafayette or Panola County.

“We just reached out to Ms. Sheryl [Cannon of Cannon Nissan] and she loves recycling ,” said Robinson. “She does it at all of her locations, so we decided to collaborate and put this together.”

The recycling bins are located directly behind the Cannon Nissan of Oxford building just off MS Highway 6. Bins are available for aluminum and steel cans, mixed paper, newspapers, cardboard and plastic. For more detail on how to recycle or what is recyclable, click here.

The COVID-19 pandemic put a stop to many city department operations like the recycling department’s curbside pick-up service , but Robinson says they are back up and everything is going great. City officials and community members are making a real effort to be environmentally conscious.

“I’m getting more calls from businesses to recycle cardboard and get cardboard dumpsters that we have now,” Robinson said. “It’s just been a real great experience. I think a lot of people want to because they come from outside Mississippi and they want to see it here as well, so we get a lot of support.”

Kevin Herod has been an employee with Oxford’s Environmental Services Department for 17 years. Herod says seeing this kind of development is beautiful to him.

“When I first started it was so small,” he said. “I started on the back of a garbage truck and eventually I moved to recycling with Ms. Amberlyn and over the years it kind of expanded. Everything just started growing.”

With a new location officially in operation, Robinson said she can see the recycling service growing out even further.

“Hopefully we will go out further, reach out to more of the county and have more drop-off locations,” she said. “We are just trying to build it more and more and more.”

Recycling drop off locations are available for residential use at the Municipal Center City Shop on Molly Barr Road, on Highway 7 South next to Fire Station #3 and at the Recycling Center at the City of Oxford Landfill on County Road 321 (Pea Ridge Road). Hours of operation are Monday through Friday from 7 AM to 3 PM.

For more information, visit the city of Oxford’s Recycling Department page at www.oxfordms.net/department/recycling.