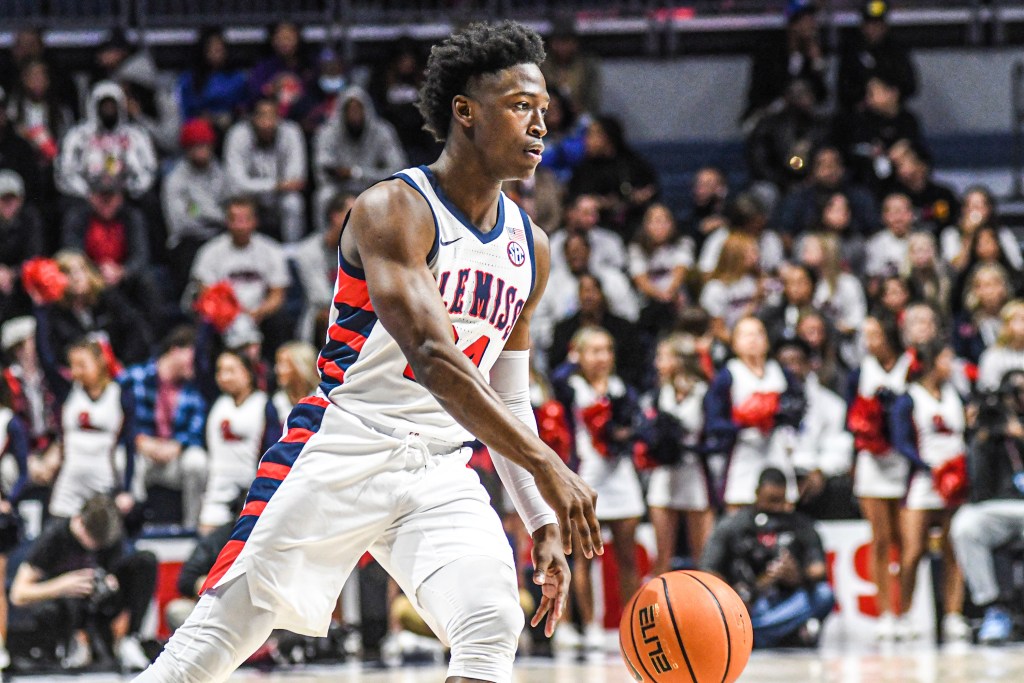 Ole Miss guard Jarkel Joiner (24) dribbles against Alabama at the Sandy & John Black Pavilion in Oxford, Miss. on Wednesday, February 9, 2022. Joiner was named a finalist for the 2022 Howell Trophy this week. (©Bruce Newman)

Former Oxford High School standout and current Ole Miss leading scorer Jarkel Joiner was named one of three finalist for the 2022 Bailey Howell Trophy award Wednesday, becoming the first OHS graduate to be named a finalist for the award.

Joiner, who started his collegiate career under Rod Barnes at Cal State Bakersfield before transferring to Ole Miss, leads the Rebels with 14.5 points per game on 43% shooting from the field. The senior guard is also third on the team in three-point percentage at 35.9%

The Howell Trophy, named for two-time All-American Bailey Howell, is presented each year to the top men’s college basketball player in the state of Mississippi. Joiner is among three finalists for the trophy this season, along with Mississippi State guard Iverson Molinar and Southern Miss forward Tyler Stevenson.

An Ole Miss player has claimed the award in six out of the last nine years, including reigning winner Devontae Shuler.

The Rebels are in the midst of a down season, currently sitting near the bottom of the SEC standings with a 13-15 record. Ole Miss is 4-11 in conference play, their worst record since head coach Kermit Davis took over the program in 2018.

They have been plagued by injuries all season, including a back injury to Joiner in January that sidelined him for over a month.