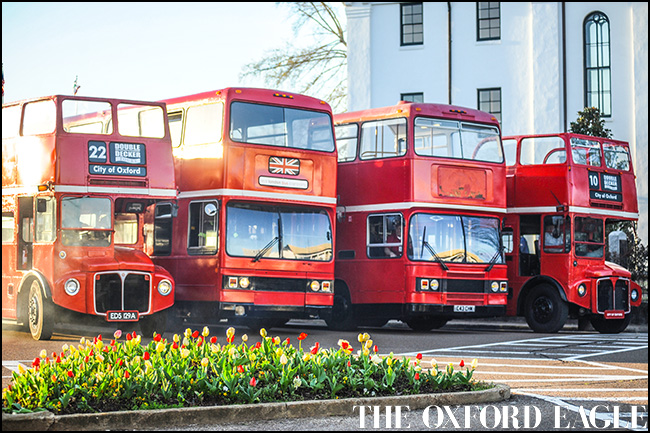 The Oxford Tourism Council is investing in the future of the Double Decker Festival’s brand by getting the city’s double-decker buses some much-needed repair.

With all four double-decker buses currently out of commission, the council cannot definitively say if any of the buses will be up and running in time for the festival in April. Double Decker Coordinator Lee Ann Stubs said they hope to have at least one bus running. If not, two buses will still be placed on the festival site for photo opportunities.

During the council regular meeting on Wednesday, board member Jason Plunk reported that two of the four buses, a Routemaster 562 and Routemaster 1711, would have to undergo significant maintenance.

“We own two Routemasters out of 2,675 buses ever built,” said Plunk. “Pretty much all the parts that were made for them have been made.”

Imported from England to Oxford in 1994, the fire engine red buses have become as synonymous with Oxford as the University of Mississippi and the name Ole Miss itself. In the council’s view, maintaining these symbols will also maintain the city’s brand.

Plunk explained that the Routemasters have undergone numerous repairs through the years, such as replacing one bus motor with a motor from a dump truck, but new developments are calling for serious repairs.

“They are just not roadworthy,” said Plunk. “They’re old, they’re beat up and tired.”

The biggest issue is brakes. One bus starts up fine, but it is unable to stop because the motor cannot make enough vacuum to make the hydraulic brakes work.

“We’re going to take a bus that was donated from the school district and we’re going to cannibalize the new bus, and make the old bus have a modern motor, computer and bells and whistles that you have to have when you have a vehicle like that,” said Plunk.

Additional upgrades will include, air brakes, modern transmission and new wheels and tires. Mechanics would be able to stop by NAPA and pick up parts for the bus, said the board member.

It is a mighty undertaking and there is no number on the final cost, but the city approved the council using up to $200,000 for one bus which comes from food and beverage expenditure. Plunk hopes that the money left over to sand and repaint the bus and even begin repairing the second bus.

“Hopefully within the next year, we will have two [buses] that are the real deal,” said Plunk.