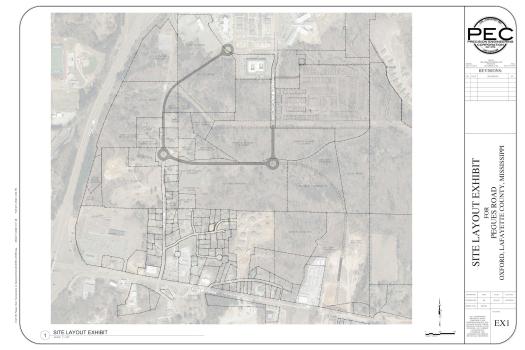 The Oxford Board of Aldermen debated the direction of an extension to Pegues Road connecting the roadway to Oxford Commons that left board members wanting more information.

According to Chief Operations Officer Bart Robinson, he and City Engineer Reanna Mayoral looked through five or six potential routes but only two options were feasible and functional. One option, the west route, affects private and city property but it would extend Pegues just south of the Oxford Conference Center.

The other route option could connect Commonwealth Boulevard to Pegues Road.

“Commonwealth goes by Della Davidson, exits by Sisk Avenue and has a traffic signal,” said Robinson. “Because of future circulation and the volume of traffic this road could potentially carry in the future— the connection of the Oxford Conference area and Kroger and the connection from Pegues Road area to the schools— I thought that could serve the most traffic.”

After his presentation, Robinson left it up to the board to determine the best option but members took different stances.

Mayor Robyn Tannehill chose Commonwealth as the best option but said it was plausible for both to happen.

“I think both of these will happen at some point in time,” said Tannehill. “Both of these would be useful routes and as we talk about what the future of the conference center is, I think that plays into this discussion as well.”

To the board, the conference center is in a state of limbo due to the COVID-19 pandemic. Many of the events and conferences held at the venue were canceled or ruled out because of COVID-19 restrictions, leaving members wondering how to utilize the center in the future.

Tannehill said a discussion on future plans for the venue will be discussed more in-depth at a later date.

Ward I Alderman Rick Addy proposed the engineers go with the west route through private and city property due to the existing roadway. Alderman-at-large John Morgan notably agreed with Addy.

“You got a road that’s already there,” said Addy. “I understand the Commonwealth but we’re not buying near as much property with this route.” The alderman pointed out that the Commonwealth option would bring all the traffic right in front of their schools.

Not only were members split on the routes, but some questions they proposed could not be answered during the recess meeting. Addy proposed talking to the schools on their design proposal and Morgan called for Robinson to gather estimates for land acquisition and topography so the board could make a better-informed decision.

“We could get some land acquisition calls versus what we already know,” said Morgan. “We’d put that together with what the topography cost would be. I would hate to find out that one of these ways would cost us $800,000 to $1 million more than the other one.”

Robinson said he would reach out to an appraiser to look at both route options and get more in-depth designs to see how much right-of-way each route would need.

“Based on the length of the road which is essentially the same and two roundabouts on both, the land acquisition cost will be the only significant difference,” said Robinson.

In the end, the board decided no decision would be made until they receive estimates and tabled the discussion until further notice.