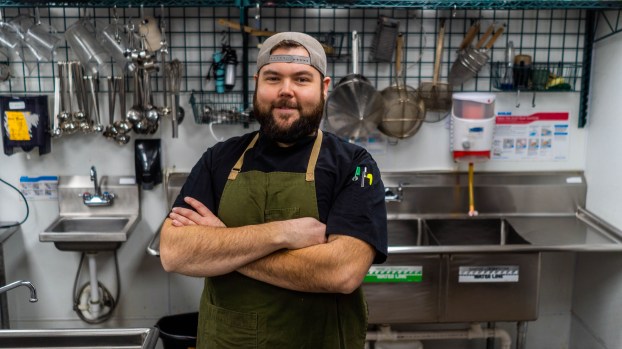 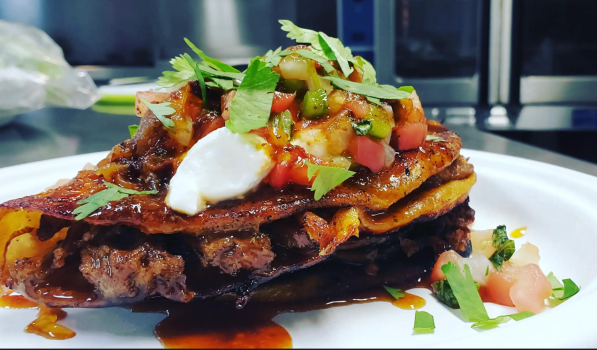 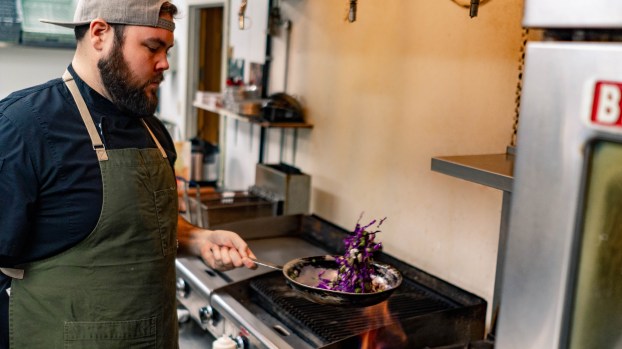 Locally-owned food service company, Rebel Chefs, will showcase its culinary talents this Sunday, February 27 for a pop-up restaurant event at Bar Muse off the Square.

Opened in October, the laid back and contemporary cocktail lounge is located on the corner of Van Buren Ave. and S. 11th St., inside The Lyric.

Tillotson said that beef birria is more “traditionally” put inside tacos, but that he personally prefers wrapping it, so it becomes like an egg roll.  His preparation requires that the braised beef is cooked overnight for up to 12 hours, with chilis, onions and garlic, until it’s shreddable or stew-like.  Then it’s mixed with pureed vegetables and Oaxaca cheese, before deep frying.

The ‘jus’ leftover from cooking the beef is reduced to a dipping sauce, and is paired with a cilantro lime crema to offer two dip options for the appetizer.

With regards to the roasted pork shoulder, which will similarly roast overnight, Chef Tillotson said he intends to make use of various Indian spices, like coriander, cardamom, and clove.  Accompanying tomatoes and red peppers are charred whole before getting blended down to a sauce.

Chef’s Tillotson’s sauces also include a chile adobo, for the roasted sweet potatoes, and the juice left for the pork will be cooked down in some collard greens.

Tillotson is excited for his first culinary adventure of this sort, since Rebel Chefs began in January 2021.  Besides having done work with local food recovery programs, to help eliminate hunger and food waste in the community, the company’s been mostly devoted to the food service’s primary account, the Sigma Pi fraternity at University of Mississippi.

The Chef had been in the sorority and fraternity food service for over three years, for larger companies based outside of Mississippi, when, he said he “noticed some things that could have been done better, and more affordable than these bigger companies.”

Tillotson said, “I was already doing it, and I was good at it – and noticed improvements that could be made – so I decided to start my own thing.”

“The pork with the greens and beans and potatoes, I’ve done that at the Sigma Pi house, and they really liked it,” he said.  “They loved the sweet potatoes, and they love the pork, so I decided that would be a good thing to do at this pop-up.”

Regarding the eclectic menu, Tillotson explained that it’s part of the branding that he wishes to create for his company.  “It’s a little different ya know; a little out of the box.  We can do some creative stuff, but it’s still really down home cookin’.”

Bar Muse will do happy hour drink pricing from 3 to 5, which will include beers, classic cocktails and wines as well, according to owners Ross Hester and Joe Stinchcomb.

They also intend to offer cocktail pairings to the menu items.  “For the roasted pork shoulder we actually have a really cool red wine; it’s a Malbec Syrah blend I think will go really well,” said Stinchcomb.

He said another cocktail, the “Shagadelic,” a tribute to the hilarious Austin Powers movies, will make for another good pairing with the food, and that the “grapefruit acidity really helps with the richness.”

Bar Muse’s experience with the pop-ups so far has been positive.  “We just think it’s a really cool opportunity for us to highlight some local chefs and local talent, and the culinary scene. It changes it up on Sundays for us, something just a little bit different.  I think it’s a good time, and space to have a pop-up restaurant,” said Stinchcomb.

According to Hester, Bar Muse’s goal is to try to do at least one a month.  “We’re trying to figure out how we can do one in March, but we don’t have a date yet set,” said Hester.  “And we’ll try to do one in April as well.”No reservations are required for the Sunday event. “Just walk in, get a drink, get a plate of food,” plainly said Stinchcomb.

Rebel Chefs can be contacted by email at rebelchefsms@gmailc.com, and Bar Muse at ross@barmuseoxford.com.