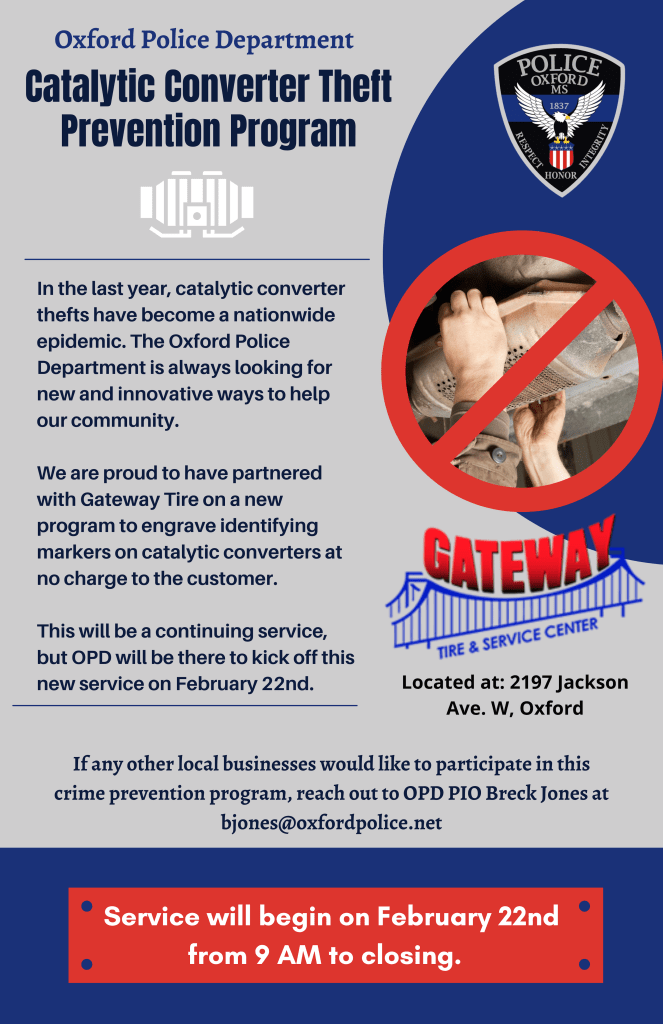 The Oxford Police Department aims to curb the thefts of catalytic converters.

OPD has teamed with Gateway Tire to engrave identifying marks on the devices. Authorities across the region have seen a spike in thefts of catalytic converters in the past year.

The devices clean up auto emissions. The lure for criminals is cashing in on the precious metals inside them, a state news source reported.

Oxford Police Chief Jeff McCutchen says his department is also working with scrap yards to spot the marked car parts when they arrive.

“If they see the inscription or a place that has been filed off, then there is a good chance it was stolen,” McCutchen said. “It’s a way of taking money out of the criminals’ hands. If they see they can’t make any money off of (stealing catalytic converters), maybe they will move on.”

“It can be a big hit to people who are already stretched financially,” he said.

While the criminals might get a couple of hundred dollars for a stolen converter, the damage they cause trying to quickly saw off the items in the dead of night can cost the car owners $4,000 or more, the newspaper reported.
Oxford detectives Mike Burks and Scott Hollowell researched the problem and found a host of ideas to prevent theft, including welding rebar and metal shields under vehicles. Instead, they opted to keep it simple and try to deter the thefts by using inscriptions.

The idea is that when a converter shows up at a scrap yard or metal recycling center with an inscription, it will be easier to determine whether it was stolen.