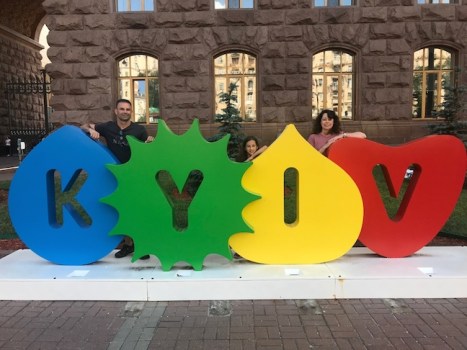 Robby Rowland and his family have made a second home in Ukraine. The deep ties to a country they have come to love brings heartache as they watch it attacked and invaded by the Russian army. (From left to right) Robby Rowland, his daughter Dasha and his wife Felesha Rowland. (Photo: Robby Rowland) 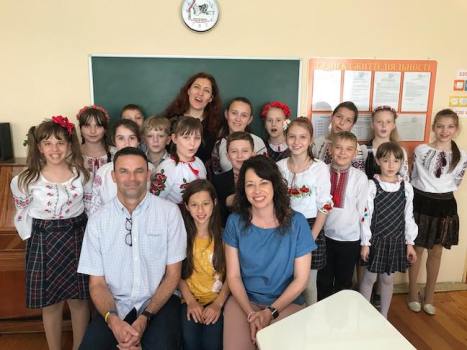 Centered from left to right: Robby Rowland, his daughter Dasha and wife Felesha Rowland. The Rowland family sits with a class of Ukrainian students at a school in Ukraine. (Photo: Robby Rowland) 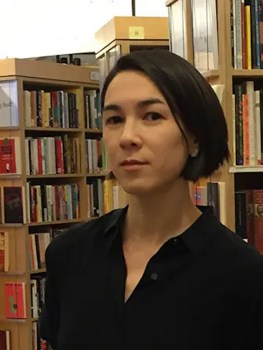 The world is watching as Ukrainians fight for their home against Russia’s invasion with shock and unease at what is playing out before them.

Although Ukraine is over 5,000 miles away from Mississippi, the conflict overseas is hitting very close to home for many local residents.

Watching a home under siege from afar

Robby Rowland is watching the news and developments of the invasion with a heavy heart. Although Rowland is a native of Mississippi and works as associate pastor at Pine Grove Baptist Church in Benton County, Rowland and his family have created a second home in the Ukraine and have many loved ones who are in the country living in fear from day to day.

“I started to go to Ukraine in 2003 for short-term missions projects for a couple of weeks but since 2006, my family actually lives there for about three months out of the year,” said Rowland. Typically during the summer, the Rowland family holds summer camps for Ukrainian kids, teaches English in ESL training classes and helps out with local orphanages and youth camps.

“I actually have a daughter [Dasha] from Ukraine and she’s 14 now, so we have real close ties with the country,” Rowland said. Despite being unable to go back for almost two years due to the COIVD-19 pandemic, Rowland and his family have a deep love for Ukraine.

For someone who has created a second home in the country, Rowland was fully aware of the 8-year-long tensions between Ukraine and Russia just as any other Ukrainian citizen would. So while the actions of Russia’s President Vladimir Putin may not have been as surprising to him, it was no less devastating.

“It’s just killing us to see all the war and everything,” he said. “With all this going on it’s really put a lot of sorrow in our hearts. We have so many — I don’t want to call them contacts— just family members there and people we’ve known ever since we’ve been going. We’re just trying to keep contact with those people.”

Rowland said many of the people they know are scattered across the country trying to find a way out, but there are many who do not have anywhere to go.

“My heart goes out to people who don’t have anywhere to run to and they just have to stay where they are,” he said.

Many are wondering how the fight between Russia and Ukraine will conclude, but Rowland said he knows the Ukrainians will not stop fighting for their home.

“I’m so proud of them but at the same time, I’m so sad for them because they’re just saying ‘We’re not going to live under that. We’d rather die,’” said Rowland. “There are kids making Molotov cocktails. It’s that kind of patriotism.”

If anyone wants to contribute to helping Ukraine and it’s citizens, Rowland encourages everyone to pray for Ukraine, urge politicians to help issue no-fly zones and give to organizations helping in the effort.

Awaiting a return and change

Anthropologist Kristin Hickman can understand the feeling of worry for their loved ones on the other side of the war. Hickman told The Eagle her boyfriend Grigory Borbun, a Ph.D. student in anthropology at the University of Chicago, is back in his native country but doing his best to make it back to the United States.

Media outlets have reported protests amongst Russians who strongly condemn Putin and his administration’s actions against Ukraine. Protestors are being met with opposition from local authorities, but the message is resounding loud and clear when even Russian elites are showing their backs to the government.

According to Hickman, Gorbun was conducting research in Moscow when the invasion began and they realized he needed to leave the country quickly.

“A lot more people want to protest but it’s dangerous and there’s also people like my boyfriend who largely have their life abroad so there’s sort of this small window to get out before all of the flights get canceled,” she said.

However, matters are complicated because Gorbun has to renew his American visa, as Russian foreign exchange students are only issued a one-year visa, by first getting a visa from Britain.

While there are very few positives to explore on either side, Hickman said she is happy to see that people in Russia are speaking boldly against their government’s actions.

“I don’t want to speak on the behalf of any Russian because I’m not Russian but I think the important thing here is the explicit push back on the part of Russians who are in Russia right now against what Putin is doing,” she said. “Clearly the Russian people are not taking this lying down.”

While she awaits her partner’s return, Hickman is keeping up to date on the news and paying to help students escape or shelter themselves from the fight.

“There’s a lot of foreign exchange students in Ukraine who are sort of stranded and are not being helped by their government including thousands of Nigerian and Moroccan students which hits close to home because I do research in Morocco,” said Hickman. “It’s both important to send money to Ukrainians who are fleeing and foreigners who are stuck in Ukraine.”