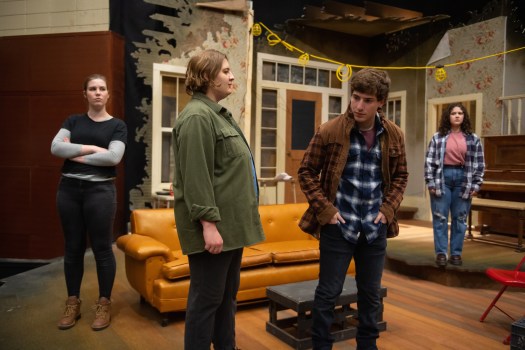 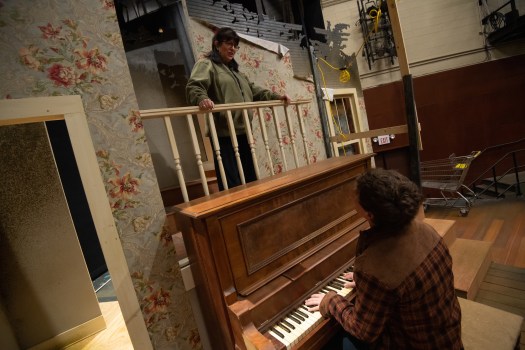 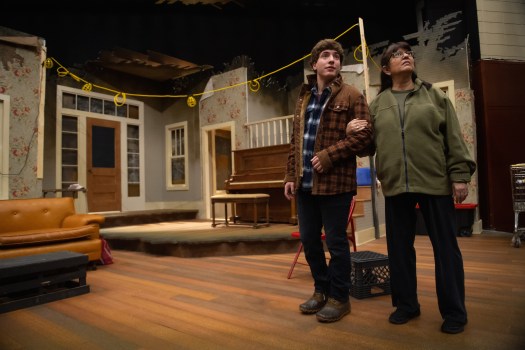 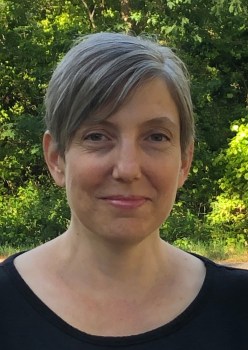 Playwright Anne Marie Cammarato spent a monthlong residency in Oxford to focus on the script for 'Hazel.' Submitted photo 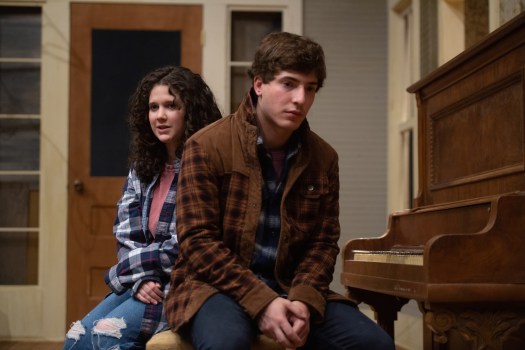 The first 2022 production of the University of Mississippi Department of Theatre and Film is a world premiere that was developed right here in Oxford and features an unlikely character: the weather.

Tickets are $20, with discounts for UM employees and students, and can be purchased from the Ole Miss Box Office at the Ford Center. Call 662-915-7411 or click here to order.

The story follows a family, bound together by loyalty and tradition, who are trying to balance the external pressures of a global climate crisis – persistent storms batter their house and floodwaters are not-so-slowly swallowing the peninsula it sits on – with the internal pressures of various personal crises. The tension inside the house seems to rise and fall with the barometric pressure outside it.

“Each of these family members is dealing with a personal crisis in the midst of a larger crisis,” playwright Anne Marie Cammarato said.

“Hazel” is the inaugural production to come from the department’s new Emerging Women’s Playwriting Fellowship, a program designed to address the opportunity gap faced by many female and female-identifying playwrights. Cammarato was selected to receive a monthlong residency in Oxford to focus on the play.

It was originated by Isom fellow and professor emeritus Rhona Justice-Malloy and developed within the Department of Theatre and Film in partnership with the Sarah Isom Center for Women and Gender Studies and the Yoknapatawpha Arts Council, with support from the Office of the Provost.

“A lot happened for me – for the play – in those four weeks,” Cammarato said.

The drama centers on matriarch Sadie, seemingly in the throes of dementia; her two daughters, Jenny and Cara; and their spouses. Jenny and Cara have quite different ideas about what’s going on both in and outside their home and about how to move forward – especially as Sadie slides in and out of lucidity.

“I started to think about how dementia affects families,” Cammarato said. “I know from my own personal experience what that feels like, but I wanted to see how different people in one family can interpret what dementia looks and feels like.”

Professor Emerita René Pulliam, who was the head of the university’s bachelor’s program in musical theater from 1993 to 2019, plays Sadie. Pulliam said she was able to bring some painful personal experience to the role.

“I’m basing her much on my mother and father, and my father had dementia,” she said.

“What I understand is the movement from something that’s safe – when you don’t understand what’s going on – to reality, and if reality is scary then … the mind moves to a safer place. It could be a memory or those kinds of things.”

Pulliam said she envisions Sadie as a very strong woman who lost her husband early, raised her children, and has kept her family together as the world around them careens toward apocalypse.

“You have to see that strong woman in order to understand where the dementia is going,” Pulliam said. “I think anything that would make her emotional, pull her out of being that strong woman, throws her into a protective cloud.”

Pulliam, who still teaches dance classes at the university, has stayed involved with theater since retirement – though perhaps not as much or in the ways she had expected. Pulliam had been retired for six months when COVID-19 emerged but still has had opportunities to direct a play and work on two short films; she also is on the board of directors for Theatre Oxford.

“I’m not going to leave theater behind,” Pulliam said.

Ole Miss senior Claire Porter, of Jackson, plays daughter Cara; Cara and her spouse, Brian, are the practical taskmasters of the family. Cara’s sister, Jenny, and her husband, Dave, are perhaps a bit more idealistic, and their disagreement about both the weather and Sadie’s health is what fuels the family’s drama.

“Family dramas are such a staple of American theater … and as an actor who’s been in school for the past four years studying things like ‘Death of a Salesman’ or Tennessee Williams’ works, now to be doing something that’s similar but so different is really, really exciting.”

Porter is also excited by the challenge of portraying Cara, whom she describes as having “a bit of a hard edge.”

“She has strong opinions that she sticks to throughout the show, and an attitude of, ‘if anybody gets in my way, I’m just gonna push them over until they fall, and then I can keep going on my way,'” Porter said, adding that Cara is very different from other characters she’s played and from herself, and that she was “pleasantly surprised” to have been cast.

“It’s been a really, really fun challenge to try to do something that’s so unlike myself,” she said.

Speaking of fun challenges, how about this weather?

“As a director, I can imagine the play being produced a number of ways,” Cammarato said. “You could do it very literally, and you can have lots of rain and wind and sound, and things, you know, getting hit by a hurricane, or you could do it somewhat abstractly.

“I think both ways have an impact.”

But ultimately, Cammarato said, it’s not her responsibility as the author to figure out how to create weather on stage. In fact, she encourages students in her playwriting classes to ignore impossible-sounding ideas in favor of incorporating moments of theatricality.

“I have a lot of students who are afraid to write that a person flies, for example,” Cammarato said. “And I say, ‘If a person has to fly, they have to fly. It’s not your job to figure out how that happens.'”

The two designers agreed that the script left room for more than one approach, especially during early readings of the play.

“There was a lovely sense of ambiguity in the text,” Caudle said. “You weren’t necessarily sure how abstract or concrete the show would be, and there was limitless opportunity for interpretation, for how you might approach this show. That alone was exciting.”

“In reading it, I really did play on the ambiguity,” Palumbo added. “But I also really loved the idea of the storm as another character in this play, and how to invoke something that’s so destructive in their world, and so omnipresent and oppressive.”

As design meetings continued with other members of the creative team, a more concrete idea of how to create storms on stage began to take shape – and Caudle and Palumbo began figuring out how playing volume, color and intensity could both simulate changing weather conditions and illuminate fluctuating tensions within the family.

“It’s almost like a musical soundtrack to the emotional qualities of the show, but we’re translating it through different forms of precipitation and weather outcomes,” Caudle said.

She went on to describe the sensation of changing barometric pressure, when the winds change and there’s a sudden shift in the clouds.

“Visually, that probably means something as simple as a slight shift in color, in intensity, for what’s happening outside with the storm,” Caudle said.

But not all the weather will be subtle: “I really do try to leave people in this show saying, ‘Oh, I thought it was actually raining outside; I thought it was a big storm,” Palumbo said. “It’s so real to the people on stage that it’s kind of hard not to suck the audience into that.”

Besides the lighting and sound treatments, there’s one element that is sure to surprise audiences and make the storm feel very, very real: It’s actually going to rain onstage. The details of that trick will remain locked away with the magicians who’ve pulled it off, but it’s going to be interesting to witness.

“How disorienting could it be for an audience member to sit there and then suddenly the door opens and you’ve got the crash and rumble of thunder, and there’s lightning onstage – and then you see actual rain,” Caudle said. “Would you question maybe for a second, ‘Is it really raining everywhere?'”