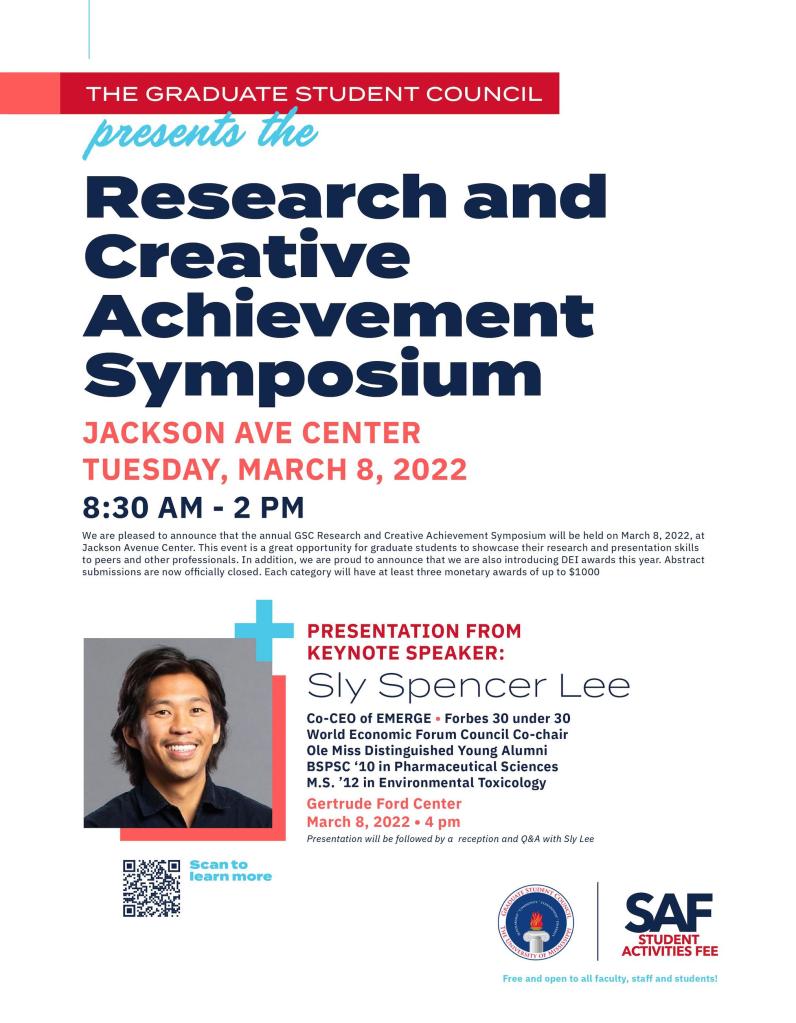 The University of Mississippi Graduate Student Council is happy to announce that their annual GSC Research and Creative Achievement Symposium will return on Mar. 8 at the Gertrude C. Ford Center for the Performing Arts.

The symposium will be held in person for the first time in two years and just in time for GSC’s biggest showcase yet.

For the last twelve years, graduate and professional students at UM have put on an event to display their graduate student’s incredible research and creative achievements. In addition, they will host a free to the public event at the Ford Center next week.

“We’re doing several things, not only because it is bigger this year despite the pandemic, but we’ve added some elements that are true firsts for the University,” said GSC President Ethan Booker.

What’s new about this year? It begins with a name change. Initially called the GSC Research Day Symposium, GSC changed it to GSC Research and Creative Achievement Symposium in order to highlight their student’s creative exploits as well as their research.

“In years past, it’s just pretty much just highlighted research that graduate students are working on,” said Booker. “Every year we would have a decent turn out — 10 or maybe 15 abstracts submitted maybe. However, what’s super exciting is that this year since we’ve included the “Creative Achievement,” we have over 85 abstracts that were submitted which is record numbers. We [the GSC] were very encouraged by the large number of abstracts submitted.”

GSC is giving away prize money as scholarships or travel grants to help students compete with or present their ideas at external conferences. The event will have four categories: Podium, Elevator Pitch, Poster and Creative Achievement. Each category will have at least three monetary awards of up to $1,000.

Rewards will also be issued to students in Diversity, Equity and Inclusion-based categories. Booker said GSC wanted to make diversity and inclusion a bigger priority from the participants to the speakers.

“Diversity and inclusion is a very important thing that happens and a lot of universities talk about it because they feel like they have to say it,” said Booker. “It’s just a check mark, but I made very clear to my executive board that this is not a checkmark. This is something we’re going to make a part of [the symposium] and a part of who we are.”

For their biggest symposium yet, GSC recruited Ole Miss alumni and co-CEO of Emerge Sly Spencer Lee as keynote speaker. Named Forbes’ 30 Under 30 and Ole Miss Distinguished Alumni, Lee is well qualified to speak to graduate and professional students on what it takes to achieve their dreams and make their dreams a reality.

“He’s coming to do this out of the goodness of his heart,” said Booker. “And the main reason he’s coming is that Sly has worked on this piece of technology for years. His company has built  device that allows people to connect and touch in the virtual world. He will be speaking about his device at the Ford Center and I think he’s bringing that device with him.”

The idea is to put on virtual reality goggles and accompanying equipment and the user could interact with virtual reality. From experiencing new environments across the world or hugging a late loved one, the implications are endless.

Lee’s advancements are just a peek at what graduate students are coming up with at Ole Miss. The GSC’s goal money and exposure they receive could launch them to the next level.

“They’ve gone above and beyond to put this thing on,” said Booker.