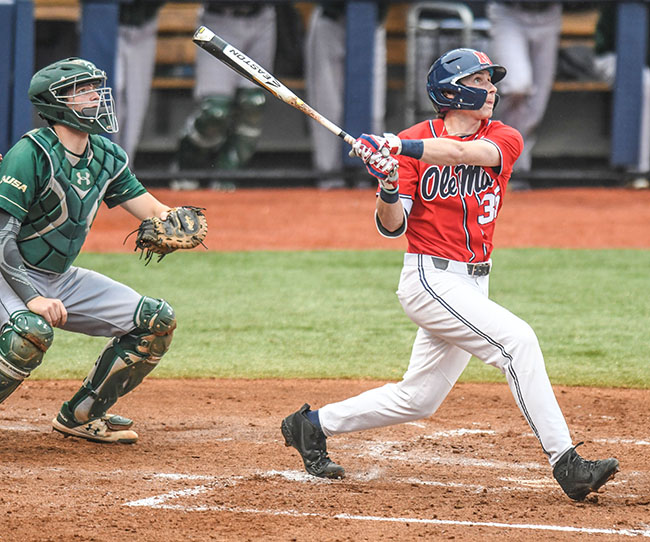 Ole Miss left fielder Kevin Graham (35) hits a homerun against Alabama-Birmingham at Oxford-University Stadium in Oxford, Miss. on Friday, March 8, 2019. Graham will undergo surgery on Wednesday to repair a broken bone in his wrist. (Bruce Newman, Oxford Eagle via AP)

Ole Miss left fielder Kevin Graham will undergo surgery to repair a broken scaphoid bone in his wrist on Wednesday, sidelining him for approximately four weeks.

The senior outfielder injured his wrist on Saturday against UCF in a play at first base. A scan on Monday revealed the fracture, which will require a pin to be placed in his wrist.

Graham was batting .308 with four home runs and a team-high 17 RBIs prior to the injury, and had played in all 10 games. His .667 slugging percentage is second on the team behind Calvin Harris.

Graham is a key contributor for the Rebels, often slotted in the three or four spot in the lineup. He was one of two batters to appear in all 67 games for Ole Miss last season, hitting .342 with 14 homers and a team-high 56 RBIs.

The Rebels will lean on sophomore Kemp Alderman and junior Banks Tolley in the absence of their star outfielder.

Alderman is batting .368 in seven games so far this season with an OPS of 1.087. Tolley, a defensive specialist, has one hit in three at bats.

Ole Miss plays Alcorn State at home on Wednesday at 6:30 p.m. before hosting Oral Roberts in their final weekend before SEC play.