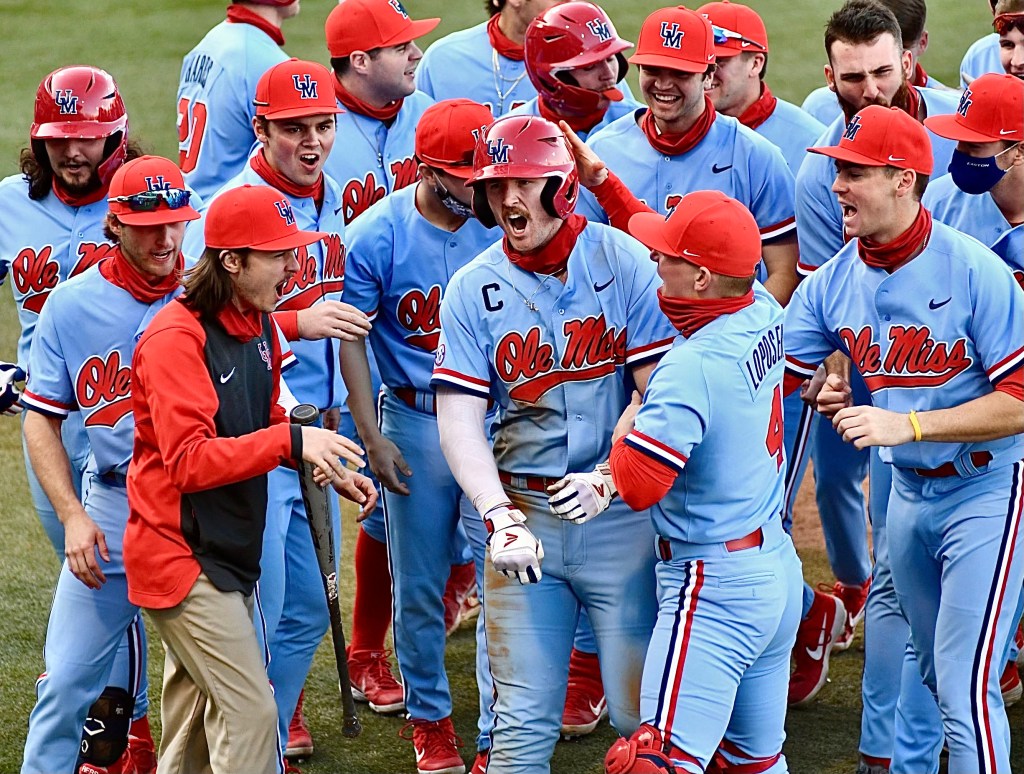 Ole MIss third baseman Tim Elko is greeted by his teammates after hitting one of his two home runs against Belmont at Oxford-University Stadium on Sunday, March 7, 2021. (Bruce Newman)

The Ole Miss baseball team is firing on all cylinders to start their 2022 season, winning 10 of their first 11 games of the year.

Their 10-1 record is tied for the best start to a season since 2004, when they started 11-0 before a loss to Arkansas State at home.

The Rebels boast one of the most explosive offenses in college baseball, with eight players hitting above .300 to start the season. They have hit 19 homers and driven in over 100 runs in just 11 games while holding opponents to fewer than three runs per contest so far.

They have a team OPS of .986, 11 points higher than that of the 2020 team that started 16-1 before their season was shut down due to the COVID-19 pandemic. Their .557 slugging percentage as a team is 10th in the nation and second in the SEC behind Tennessee.

The real surprise is in the Rebels’ bullpen however. After being the weak point of the team for years, four of their seven relievers have yet to surrender an earned run on the season, and five have a WHIP of 1.00 or lower.

The bullpen has provided much-needed relief for a team trying to get back to Omaha for the first time since 2014. With plenty of question marks remaining around the starting rotation, Jack Doughtery, Mason Nichols, Riley Maddox, Dylan Delucia and fan-favorite Wes Burton give the Rebels plenty of firepower to make the College World Series.

Some of the questions surrounding the starting rotation were answered on Monday, when head coach Mike Bianco announced that John Gaddis will be the new Friday starter, pushing the struggling Derek Diamond to Saturdays.

Gaddis has allowed one run in 14 innings of work so far, registering 12 strikeouts and holding opposing batters to just .170 in the box.

Diamond, meanwhile, has struggled to miss barrels early in the season, posting a 4.91 ERA in 14 2/3 innings and giving up eight extra-base hits.

Bianco also announced that Drew McDaniel will no longer be the Sunday starter, but added that he is not ready to commit to a regular third starter at this point.

McDaniel has done a good job preventing runs from crossing the plate so far this season, but has struggled with command at times. The junior righty has walked seven batters this season, and has failed to make it to the fifth inning in each of his three starts so far.

Ole Miss was scheduled to play Memphis on Tuesday, but the game was postponed due to “inclement weather in the forecast.” The Rebels face off against Alcorn State on Wednesday before hosting Oral Roberts this weekend in their final non-conference series.