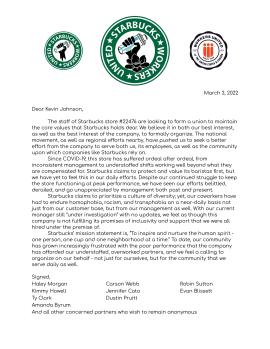 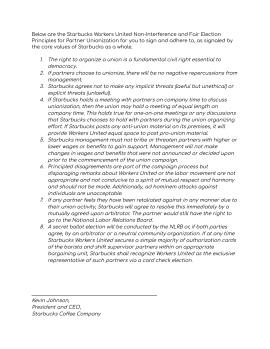 Starbucks located on West Jackson Avenue in Oxford has become the first location in Mississippi to announce plans to unionize as a part of Starbucks Workers United.

Employees at the coffee chain’s local branch have written and signed a letter to the company addressed to CEO Kevin Johnson detailing their complaints citing overwork, homophobia, transphobia and racism in their workplace.

According to Mississippi Today, ten employees in total signed the letter on Thursday and posted a copy of the message to their social media page on Friday.

The second paragraph reads: “Since COVID-19, this store has suffered ordeal after ordeal, from inconsistent management to understaffed shifts working well beyond what they are compensated for. Starbucks claims to protect and value its baristas first but we have yet to feel this in our daily efforts. Despite our continued struggle to keep the store functioning at peak performance, efforts to keep the store at peak performance, we have seen our efforts belittled, derailed and go unappreciated by management both past and present.”

Although this may be the state’s first, more than 100 stores branches nationwide have petitioned to hold elections of their own.

After two Starbucks stores in Buffalo, New York, voted to unionize late last year, workers at more than 70 Starbucks stores in 21 states petitioned the NLRB to hold their own union elections, according to Workers United, the union organizing the effort, reported the Associated Press.

The employee’s read that their current manager is under internal investigation for claims of discrimination, but workers have not received an update. A representative with Starbucks stated that the company is taking the allegations of discrimination seriously.

“We are listening and learning from the partners in these stores,” a representative told Mississippi Today.

Starbucks has said repeatedly throughout the last year that while it does not think its workers need unions, it respects their right to organize.

One of the chain’s early union leaders has a direct tie to Mississippi.

Jaz Brisack, a University of Mississippi graduate and Rhodes scholar, is credited with beginning union talks among her Starbucks coworkers in Buffalo. She moved to Western New York to work on union campaigns with an organizer she met while helping with the failed attempt unionize the Nissan plant in Canton.

The AP reports multiple polls showing union approval is high and growing among the youngest workers. And U.S. union membership levels are even ticking upward for workers between 25 and 34, even as they decline among other age groups.

Mississippi is a right-to-work state, meaning workers are not required pay dues or join an established union. While uncommon, workers in Mississippi can still unionize.

The National Labor Review Board will hold an election if at least 30% of workers sign cards or a petition saying they want a union. If a majority of those who vote choose to unionize, the union is certified and can bargain on behalf of the employees.

“Partners in Oxford, MS, believe that progress can happen anywhere,” tweeted out the Starbucks United Workers of Oxford, “even in the states you’d least expect it. The Magnolia State has joined the movement!”