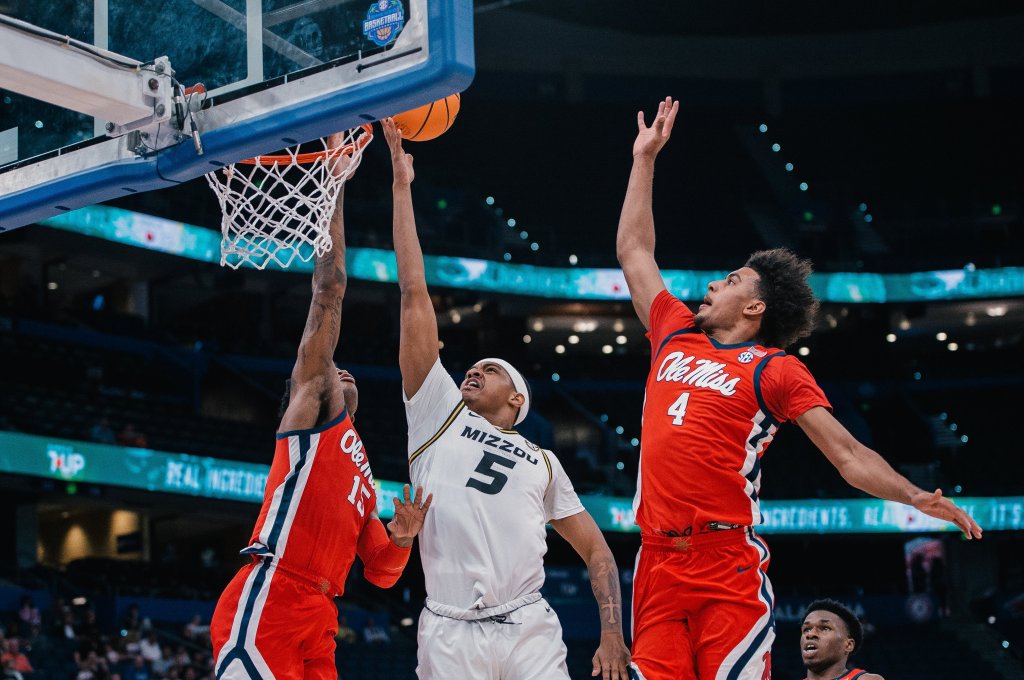 Missouri's Jarron Coleman (5) rises for a layup between Ole Miss's Jaemyn Brakefield (4) and Luis Rodriguez (15) in the Rebels' 72-60 loss to the Tigers in the first round of the SEC tournament on Wed., March 9, 2022. (Josh McCoy/Ole Miss Athletics)

The Ole Miss men’s basketball team fell to Missouri on Wednesday night in the first round of the SEC tournament, bringing their disappointing 2021-2022 campaign to an abrupt close.

The Rebels’ lack of shooting and playmaking has been their weakness all season, and it came back to bite them against a Missouri team that held them to 41% shooting from the field in the 72-60 loss.

“I give Missouri a lot of credit. They played well all three times against us,” said head coach Kermit Davis. “They played really well, and I thought they were extremely competitive in the second half.”

They were also bullied on the glass, getting out-rebounded by 12 on a night where 7-foot center Nysier Brooks stood three inches taller than any other player on the court.

“I thought Missouri — I thought we had some good spots of physical play, but in the end, I thought they — their team beat us by 12 on the boards,” said Davis. “[They were] physical in the paint, so tonight they played really well.”

Ole Miss struggled to create clean scoring opportunities without Daeshun Ruffin, who went down with an ACL injury in February.

The only true point guard on the roster, Ruffin’s passing and dribble penetration was sorely missed down the stretch of the season as the Rebels were forced to rely on senior Jarkel Joiner and sophomore Matthew Murrell to carry the creation load.

Neither Joiner nor Murrell is a true lead guard. Both players are adept scorers who get to their spots and can create shots for themselves, but they struggle to find open teammates or pass out of double teams when they come.

This left Ole Miss in a bind towards the end of the season, as they struggled to find an offensive identity, relying on their two scorers to create for themselves while everyone else got out of the way.

“You know, I think this is, I don’t know, 38 or 39 years in college basketball, and it’s probably the most uniquely challenged with some of the guys that we’ve lost,” Davis said. “We lost the highest rated player that’s ever played here, Daeshun Ruffin. He was just finding his way and tore his ACL. We lost our toughest defender, Robert Allen, at the Memphis game. We beat Memphis, and obviously Jarkel, he is still not 100%.”

The Rebels failed to adjust to the depleted roster, insisting on playing a slow, half-court offense despite their lack of playmaking ability. While most teams use a 1-3-1 zone to force turnovers and get out on the break, Ole Miss struggled to get up and down the court effectively, often pulling out of transition attacks rather than forcing the issue.

In a rapidly-changing college basketball landscape, the Rebels look like a relic of a bygone era. They continue to hand out scholarships to under-developed freshman who will take years to become impact players. Players like James White and Eric Van Der Heijden are promising players who could play a significant role on an SEC team as upperclassmen, but if the Rebels want to make the NCAA tournament they need impact players who can step in a play key minutes against tough SEC opponents.

Davis alluded to that fact after the loss, pointing out the effectiveness of Auburn’s Bruce Pearl and Kentucky’s John Calipari reshaping their rosters through the transfer portal.

“I have been in this league with my dad coaching since I was 5 years old, and you couldn’t imagine that Kentucky would have four transfers to start senior night at Kentucky. You know? It’s just kind of the way of the world,” Davis said. “Credit Cal and Bruce both [for] what they did to resurrect their rosters, and that’s what we’ve got to do.”

Davis said that he is hopeful the program can reshape the roster in the offseason and put a team on the floor that will compete for a third NCAA tournament appearance in five years.

“It’s a big boy league, and I get it, but I’ve got a great AD. We’re going to work day and night to get this thing flipped next year, and they’ve given us every resource to be successful at Ole Miss, so it’s right on us,” he said. “We’re going to go out and put together a roster that the Ole Miss fans can be proud of, and we’re going to be right here next year hopefully playing for seeding in the NCAA tournament.”