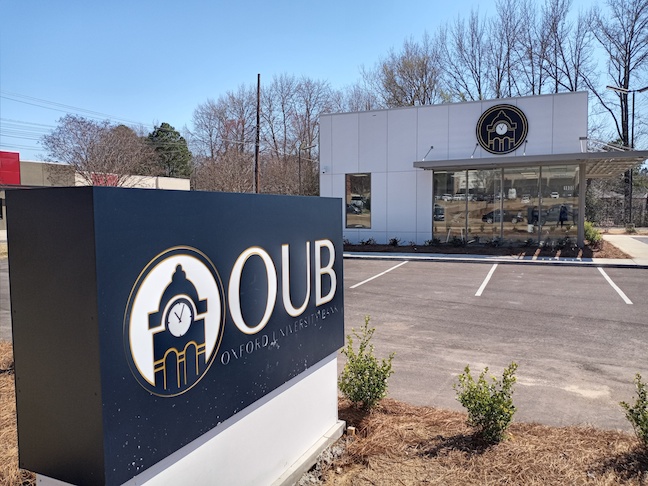 Oxford University Bank has reopened its second location on University Avenue with key improvements that will benefit its customers.

“We’re just real excited to back on Jackson Avenue,” said David Guyton, CEO of OUB. “The branch itself has a kind of more modern look than your typical branches, so we’re excited to see how that goes.”

In June 2021, OUB moved out of 2301 Jackson West Avenue and began a search for a better place to settle.

OUB then rejoined businesses at its new spot located at 1800 Jackson West Avenue, just a minute away from its former site, and officially opened for customers on Monday, Mar. 7.

Wishing to start anew, OUB demolished the building previously at the site and created a new one from scratch.

The reopening took longer than anticipated due to labor shortages and supply chain issues backing up the construction schedule. Despite the long wait, Guyton said OUB employees are excited about the reopening and to show off the new improvements.

“It’s like an ATM except you can also talk to a live person and that person is here located in our main office,” said the CEO. The ITM includes an ATM-like touch screen and buttons, but it will also have a handheld phone providing direct access to the bank teller.

“You can do transactions just like you would with a teller,” he said. “You can use as both. You can use it as an ATM or to talk with somebody.”

For more information on Oxford University Bank, visit their website at www.oubol.com. OUB has two branches in Oxford: one located at 1500 University Avenue and 1800 Jackson West Avenue.