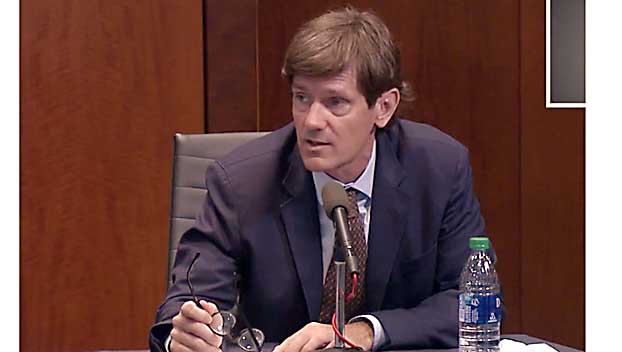 The Mississippi public health official who has led the state’s response to the COVID-19 pandemic will resign at the end of July and hopes to go back into clinical work and teaching, the state Health Department announced Tuesday.

During dozens of news conferences and other public appearances, Dr. Thomas Dobbs has implored people to get vaccinated, wear masks and maintain social distancing. He persisted even as many people, including some public officials, resisted his messages.

As the state health officer, his name is on Dobbs v. Jackson Women’s Health Organization, a U.S. Supreme Court case over a Mississippi law that seeks to ban most abortions after 15 weeks of pregnancy.

Justices heard arguments in December, and the Mississippi attorney general’s office asked them to overturn Roe v. Wade, the 1973 ruling that legalized abortion nationwide. Dobbs has not publicly taken a position on the case.

Dobbs has held faculty positions at colleges and universities in the Southeast, including at the University of Mississippi Medical Center and was state epidemiologist before moving into the top job at the Health Department in 2018. He said Tuesday that he would like to return to the academic world to teach about public health and infectious diseases.

“I feel like the time is right for me to return to the clinical side of medicine, particularly the communicable disease treatment of patients,” Dobbs said in a Health Department news release.

In August, Dobbs said he had received threats from people who believed false conspiracy theories about him and his family as he promoted vaccination against COVID-19. Dobbs said one lie is that his son, who is also a physician, receives a World Bank-funded kickback when Dobbs urges people to get vaccinated.

“I get zero $ from promoting vaccination,” Dobbs wrote on Twitter.

“I hope you can get some rest from the constant crises, but also feel pretty confident you’ll find your way to the front-lines of helping others in your next role,” Reeves wrote on Twitter. “Grateful for your friendship and counsel during hard times.”

“Our hierarchy of prioritization is extremely stupid,” Dobbs said during a Nov. 13, 2020, briefing with the Mississippi State Medical Association. “‘We’re prioritizing youth sports, not only over academics. We’re actually prioritizing it over community health, just to be honest.”

The health officer is chosen by the state Board of Health and confirmed by the state Senate. The board chairman, Dr. Thad Waites, said in the release Tuesday that board members have supported Dobbs.

“I speak for all of us when I say that we have truly appreciated his professionalism, sterling personality, and stellar leadership throughout his tenure, but especially during COVID,” Waites said. “He has been a wonderful asset to Mississippi.”

The board will meet soon to discuss appointing an interim health officer, the release said.

“Most of Mississippi will never know how tremendous a job this physician accomplished for all his fellow citizens,” Hosemann said. “To Dr. Dobbs: I am personally proud to know you and to have observed your tireless energy and selfless care in managing the response to the horrific pandemic which plagued our state. We are so very grateful.”