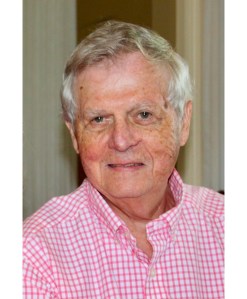 JESSE THEO (J.T) DAVIS JR.
Dr. Jesse Theo (J.T.) Davis, Jr. died peacefully at his home in Oxford, MS on March 8, 2022, surrounded by his large family. J.T. was born July 27, 1937, in Cleveland, Ohio to Mary and Dr. J.T. Davis, Sr. He moved with his parents soon after to Corinth, MS, his father’s hometown, and site of his father’s medical practice.
J.T. grew up in Corinth and graduated from Corinth High School in 1955. He entered Ole Miss in the Fall of 1955 and graduated with a BA in 1959 and a BS in 1960. Dr. Davis received his MD in June 1963, from The University of Mississippi School of Medicine in Jackson.
He completed his internship and residency programs at The University of Mississippi Medical Center (UMMC) under the guidance of Dr. James Hardy, a leader in transplant surgery. J.T. was part of Dr. Hardy’s team that researched and developed breakthrough techniques for both lung and heart transplants.
Dr. Davis then followed in the footsteps of his father and moved to Cleveland, Ohio to complete a residency program in Thoracic Surgery and Cardiovascular Medicine at St. Vincent Charity Hospital. After completing his residency in Cleveland, he moved to Memphis, TN in 1970 to join the practice of Dr. Edward Garrett, Sr., a pioneer in cardiac surgery who performed the first coronary artery bypass procedure.
In 1987, Dr. Davis returned to Mississippi to begin the Oxford Hospital’s (now Baptist Memorial) cardiovascular surgical program. After retiring from cardiac surgery, Dr. Davis continued to utilize his medical skills in wound care management, including hyperbaric treatment both in Memphis and North Mississippi hospitals. His patients and their healing were Dr. Davis’s passion, and he claimed he could only truly help a patient with a “hands on” approach. He particularly enjoyed working with Pam Calvert and Laura Renfro, his “go-to” wound care nurses over the last several years.
Dr. Davis was a fellow in the American College of Surgeons and in the American College of Cardiology. He also held membership in numerous professional societies and co-authored many significant papers along with his colleagues, Dr. James Hardy, Dr. Benton Hilbun, Dr. H. Edward Garrett, Dr. Jerry Gooch, Dr. Patricio Ilabaca, among others.
J.T. was a familiar figure in the West skyboxes at Rebel football games, surrounded by as many grandchildren as he could squeeze in. He also loved watching Ole Miss basketball games seated down front in the Tad Pad wearing his bright yellow jacket. Baseball games were worked into his daily walks from his nearby home to campus and back. Combined days of Rebel sports and family members in tow were his happiest!
J.T. treasured his days as a Sigma Chi in Ole Miss’s Eta Chapter and the fun reunions through the years as an alumnus. He took special joy by initiating three of his grandsons into Sigma Chi: two at Ole Miss (Andrew and Sam) and one at Birmingham Southern College (Logan).
Dr. Davis was a longtime member of Idlewild and Independent Presbyterian Churches in Memphis and more recently First Presbyterian and Oxford University United Methodist Churches in Oxford.
In June 1981, J.T. married Barbara Sloan Stribling of Jackson, MS, and more than doubled the size of his family. He is survived by Barbara, his wife of almost 41 years, his daughter, Robin Davis Wilson, of Atlanta, his sons, Richard Swaim Davis (Leighanne) of Birmingham, Alan Townsend Davis (Lauren) of New Orleans, daughter Sloan Stribling Hunter of Oxford, MS, Paige Stribling Recchia (Tony) of Greenwich, CT, and Wilson Stribling (Jennifer) of Madison, MS.
He leaves behind 18 beloved grandchildren: Andrew, Logan, Tricia, and Swaim Davis of Birmingham; Mary Ross and Davis Wilson of Atlanta; Colton, Peyton, and Parker Davis of New Orleans; Sam (Mary Shields) and Lilly Hunter of Oxford; Charlie, Miles, Wyatt, and Olivia Recchia of Greenwich, CT; Roger, Bennett, and Celia Stribling of Madison, MS, and one great granddaughter, Anne Stribling Hunter (Sam and Mary Shields).
He is also survived by his brother Dr. Bob Davis (Judy) and sister Sallie Dillingham, all of Corinth, MS.
He is predeceased by his parents J. T. Davis, Sr. and Mary Piatek Davis, daughter Susan Stribling Dehmer, brother-in-law Bruce Dillingham, Jr., and son-in-law Kevin Hunter.
The family wishes to express their sincere appreciation to longtime household staff Wade Thompson and Jean Howell for their care of Dr. Davis and to those who so compassionately cared for him during his final battle with renal cell carcinoma—Willie Owens, Nicole Wilson, Nikki Santana, and the caring staff of Encompass Hospice.
Memorials to Dr. Davis may be made to Oxford University United Methodist Church, Oxford, MS or Northminster Baptist Church, Jackson, MS.
A memorial service for Dr. Davis will be held on March 11, 2022 at 1:00 pm at Oxford University United Methodist Church, Oxford, MS, followed by a visitation in the Atrium.
Inurnment in the Columbarium at Northminster Baptist Church, Jackson, MS will be held later this summer around J.T.’s birthday.