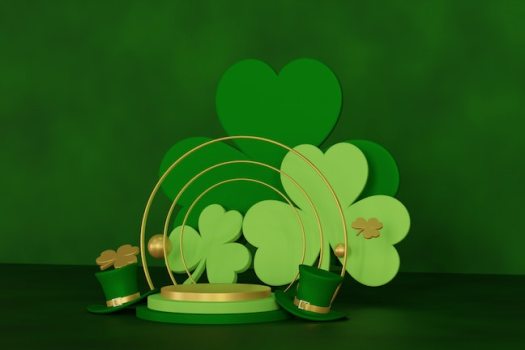 Have you ever noticed how some groupings of people (professions, ethnic groups, special interests, etc.) get a week or even a whole month to celebrate their heritage and uniqueness or to call attention to their contributions?

That’s well and good, but what about the Irish?  They only have one day.  But don’t worry; they make it count!  On March 17, St. Patrick’s Day, everybody is Irish, and practically everything you see is green.  In fact, if you don’t have on something of that color or you’re not wearing it prominently, you might get pinched.

According to Kermit the Frog, “it’s not easy being green.”  However, on this major Celtic holiday it’s not a problem because green rules the day.  Of all the possible shades – and there are a lot of them (more than 15 different ones in the big Crayola box) – the one to look for is Kelly green, that rich, dark hue suggestive of the Emerald Isle’s lush countryside, which is on dazzling display in the wonderful 1952 John Ford film, The Quiet Man.  You can’t watch that movie without falling under the spell of the landscape, not to mention all those fascinating local characters.

Yes, I’m proud of my Irish ancestry, what little of it there is.  The service that ran my DNA can’t seem to make up its mind about how much I have, but I think it’s somewhere around 10 percent.  I wish it were higher.  At least I have green eyes.  That should be worth something.

There’s really a lot to love about the Irish.  They’ve got the gift of gab, blarney, humor, and leprechauns; they have Oscar Wilde, James Joyce, and W. B. Yeats; and let’s not forget “Danny Boy,” Riverdance, and Celtic Woman.  They also love a good fight, and they fight for what they love.

And then there’s St. Patrick.  So many traditions are associated with this historical figure and man of legend – such as how he drove all the snakes of Ireland into the sea and how he used the shamrock to explain the three persons of the Trinity – that it has become impossible in some cases to separate fact from fable.  But one thing is certain: his big holiday, which has evolved into a proliferation of parties, parades, green beer, and assorted shenanigans, originated as a religious observance.  After all, the name of the celebration begins with the word “saint.”

Who was this patron of the Irish and why is he such a big deal?  Patrick (415? – 492?) was born in Britain (perhaps Wales).  As a teenager he was captured by pirates and sold into slavery in Ireland, where he was compelled to work as a shepherd and a swineherd.  After several years in bondage he escaped and returned to England.  He pursued his studies in Gaul and, at the age of 43, rose to the rank of bishop.  For some time he had felt an intense calling to return to the land of his captivity to preach the Gospel.  Upon his return there he began to teach the people the doctrines of Christianity and lead them in the path of holiness.  Despite strong opposition he managed to found monasteries and ordain priests in his adopted homeland.  This groundwork eventually resulted in missionaries being sent from there to various parts of Europe.  In short, Patrick was ultimately responsible for converting not only Ireland to Christianity but also, through the work of his missionaries, much of Europe as well.

The miraculous story behind “St. Patrick’s Breastplate,” a traditional Irish prayer for protection on a journey, deserves to be recounted.  Because Patrick wanted to try to convert the druid king to Christianity, he and his followers set out on a journey to the king’s court.  Along the way he became aware of a plot to kill him and his men.  When the future saint approached the place of the ambush, he invoked divine assistance, and his petitions were answered with a miracle: the druids saw only a doe and her fauns passing by, and thus he and his men were saved.  Here are a few lines from that prayer, which is also a hymn known as “The Deer’s Cry”:

I arise today through God’s strength to pilot me

God’s eye to look before me

God’s wisdom to guide me

God’s shield to protect me

From all who shall wish me ill

Alone and in a multitude

Against every cruel, merciless power

That may oppose my body and soul

Christ with me, Christ before me

Christ behind me, Christ in me

Christ beneath me, Christ above me

Christ when I arise, Christ to shield me.

And thus he went on to make history and leave behind a legacy that any son or daughter of Eire can be proud of.

And, as that obviously-not-Irish detective Colombo says, “Just one more thing.”  This is one of the best parts of St. Patrick’s Day: we know that when we arrive at March 17, spring and warmer weather are definitely on the way.  So, be sure to celebrate heartily, respect the traditions, and go green.  I think it’s about time for me to dust off my “Kiss Me, I’m Irish” button.

Melvin Arrington  is Professor Emeritus of Modern Languages at the University of Mississippi. Contact him at marringt@olemiss.edu