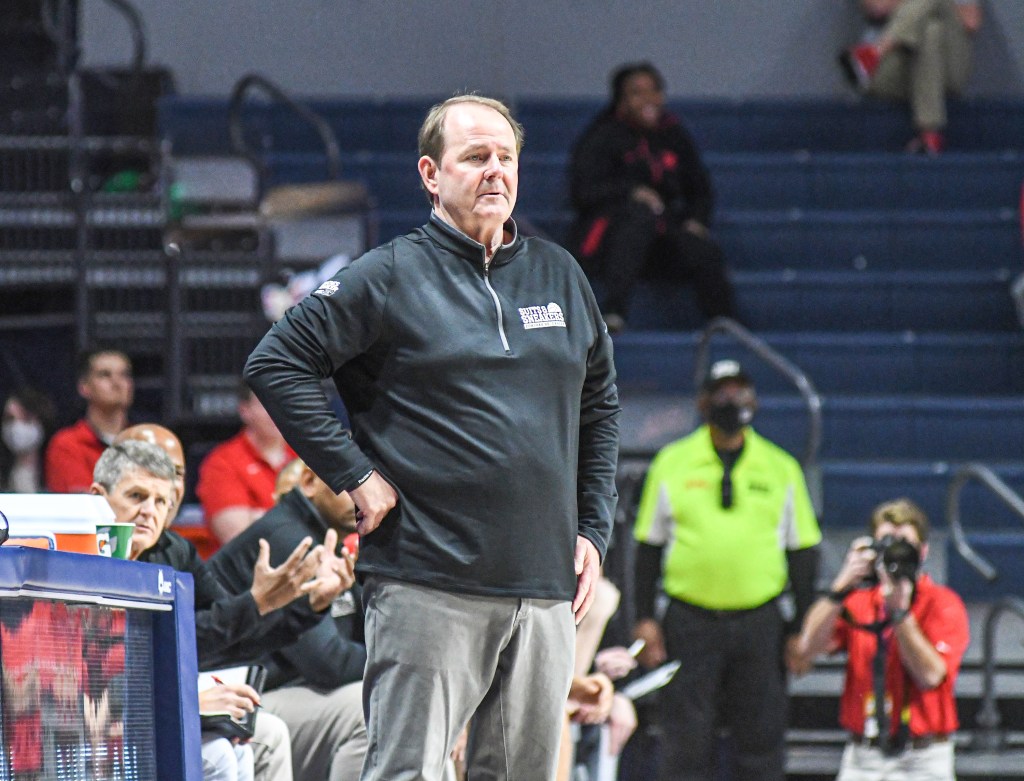 Mississippi head coach Kermit Davis watches against Florida during the first half of a NCAA college basketball game, at the Sandy and John Black Pavilion in Oxford, Miss., Monday, Jan. 24, 2022. (©Bruce Newman)

Ole Miss men’s basketball coach Kermit Davis will return for the 2022-2023 season after leading the Rebels to a 13-19 record in his fourth season at the helm.

Ole Miss announced that Davis would return on Wednesday after a week of speculation regarding his job safety. The Rebels’ 4-14 record in conference play marked their worst finish since the 1994-1995 season, prompting many fans to call for Davis to be replaced.

“Coach Davis and I have had productive discussions this week, and while our team faced some unforeseen circumstances, we are both disappointed by this season’s results,” said Ole Miss Vice Chancellor for Intercollegiate Athletics Keith Carter. “Kermit has enjoyed tremendous success throughout his career and understands what it takes to win at a high level. He has presented to me a plan to regain the momentum that took our program to the NCAA Tournament just a few years ago.”

Ole Miss lost to Missouri in the first round of the SEC tournament last week to end their third straight season without an NCAA Tournament appearance.

Many thought the Rebels would pursue Florida head coach and Ole Miss alumnus Mike White following the loss, but the former Rebel point guard accepted a position at Georgia on Monday after the Bulldogs fired Tom Crean last week.

Carter re-affirmed the school’s belief in Davis’s ability to turn the program around, citing his success previous success with smaller programs.

“We are committed to providing him support and resources in order to make the changes necessary to compete for championships,” Carter said. “We believe in Kermit’s vision for Ole Miss Basketball and look forward to seeing it translate to NCAA Tournament success.”

Davis was critiqued this season for not bringing in players who could make an immediate impact for a program wallowing in mediocrity after an NCAA Tournament berth in 2019.

He promised to be active in the transfer portal and turn the roster around this offseason after the worst campaign in his four seasons at the helm in Oxford.

“We have a great nucleus coming back with four of our top five scorers returning and getting Daeshun [Ruffin], Robert [Allen] and Jarkel [Joiner] 100 percent healthy for the 2022-23 season,” Davis said. “We will have a top-25 recruiting class with four high school players that will immediately impact our program, and we will attack the portal as aggressively as any team in America. I believe in our process but am not satisfied with our progress. And I assure you we will not be satisfied until we achieve what we have set out to do: win NCAA Tournament games.”

Ole Miss will lose key contributors in seniors Tye Fagan and Nysier Brooks, who both exhausted their NCAA eligibility after this season. Oxford native Jarkel Joiner announced his intentions to enter his name in this summer’s NBA draft earlier this month, but is widely expected to return to Ole Miss for his sixth year of eligibility.

The Rebels’ 2022 recruiting class is highlighted by four-star center Malique Ewin, a 6-foot-10 rebounder and rim protector from Lilburn, Georgia who is expected to play a significant role following the departure of Brooks. Ole Miss also signed a trio of three-star guards in Amaree Abram, TJ Caldwell and Robert Cowherd.