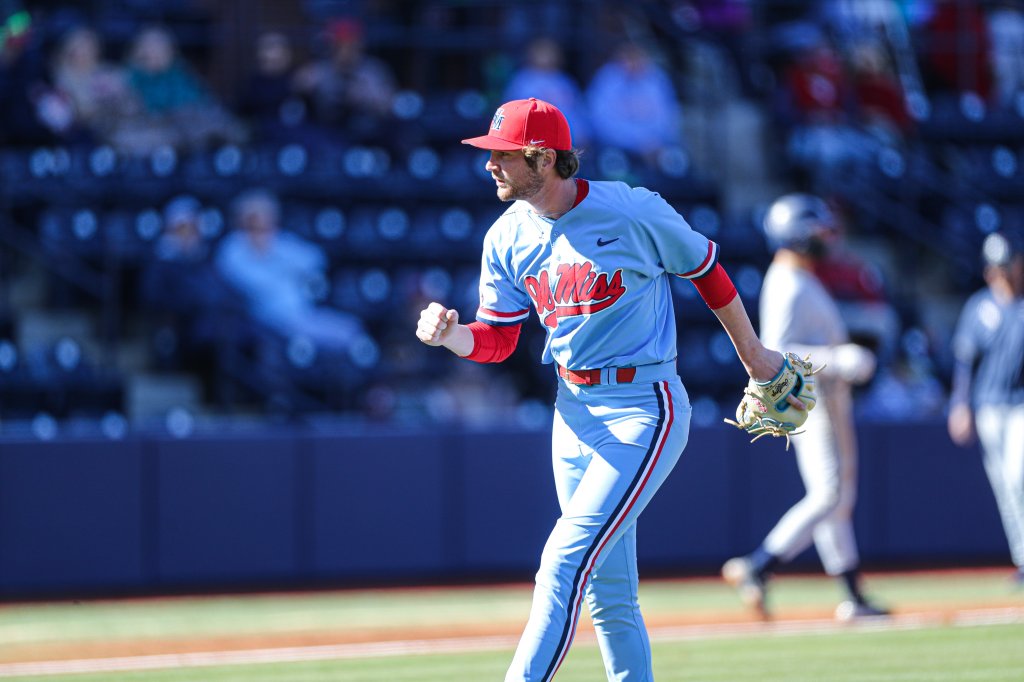 No. 1 Ole Miss (13-3) will face off against Auburn (13-4) in the first of three games on Thursday as the Rebels kick off their SEC schedule on the road.

The Rebels are ranked in the top 10 of all six major polls, and are ranked No. 1 by both D1Baseball and USAToday. It is just the second time in school history that they reached the top spot in any major poll.

Ole Miss averages 1.06 runs per inning, but has struggled in recent games following the injury to star left-fielder Kevin Graham.

The Rebels have lost back-to-back games after starting the season 13-1, falling to Oral Roberts in the back half of a double header on Sunday before losing 5-1 to Southeastern Louisiana on the road on Tuesday. They were unable to get anything going against Lions’ starter Adam Guth, who surrendered just one run on three hits in five innings of work. The loss marked just second time this season that they failed to score at least four runs in a game.

Ole Miss has won four straight games against Auburn dating back to April 2019, including a sweep of the Tigers in Oxford last season. They are 37-27 against the Tigers under head coach Mike Bianco, and have won seven out of their last ten matchups.

They have a narrow edge in the all-time series, with a record of 94-88-1 against the Tigers. They have won five straight SEC-opening series, but have not won a series in Auburn since 2009. One of those streaks will come to an end this weekend as the Rebels try to fend off Texas and Arkansas for the top spot in the rankings.

Ole Miss has received a much-needed boost from their bullpen this season as ace Derek Diamond struggles to find his groove in 2022. The Rebels’ relievers have carried the staff to a 2.59 ERA, fourth in the SEC and 12th nationally. They are also ninth in the country in strikeouts per nine innings with just under 12 punchouts per game.

True freshman Mason Nichols leads Ole Miss with six appearances out of the bullpen, and is yet to allow a run in over seven innings of work. The Jackson Prep product commands a five-to-one strikeout to walk ratio, third on the roster behind Dylan DeLucia and Jack Doughtery.

Senior reliever Brandon Johnson is one of nine SEC relievers named to the NCBWA Stopper of the Year watchlist for the best reliever in college baseball. Johnson has allowed just one run and struck out nine batters in six innings this season.

Auburn enters conference play after dropping two out of three to Middle Tennessee State last weekend to drop their first series of the year. The Tiger’s pitching staff looked dominant early in the season before giving up 21 runs in three games against the Blue Raiders.

Samford transfer Sonny DiChiara leads an Auburn offense that averages over 8.5 runs per contest. The senior first baseman is batting .462 with a 1.633 OPS and five home runs in 13 games this season. He missed four games with a bruised heel, but is expected to be fully healthy for Thursday’s SEC opener.

The Tigers have also gotten key contributions from third baseman Blake Rambusch and center fielder Cason Howell. Both players have over 20 hits on the season and are slugging over .500.

Auburn ace Jordan Armstrong has struggled mightily this season, posting a 4.15 ERA in just 13 innings. They have gotten a signifiant lift from the back half of the rotation however, as both Saturday starter Joseph Gonzalez and Sunday starter Trace Bright boast sub-2.00 ERAs.

This is a matchup between two premiere offenses who can put up runs in a hurry, so expect plenty of scoring in this one. Ole Miss will be eager to prove themselves after a disappointing midweek performance, and will likely be able to drive in plenty of runs against a struggling Auburn pitching staff. Expect the Rebels to come out on top in this one and earn their sixth straight SEC-opening series.