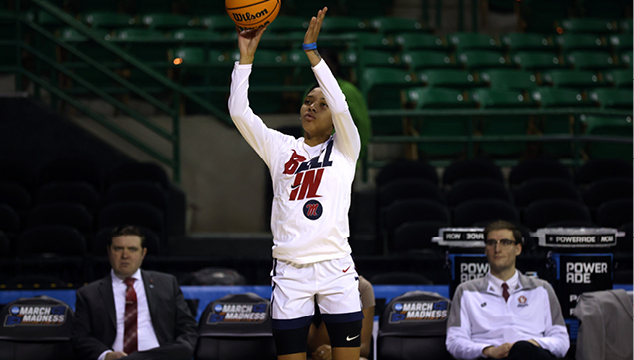 Half-court offense has been the achilles heel for Ole Miss women’s basketball all season, and that weakness reared its head Friday in the Rebels’ 75-61 loss to South Dakota in the first round of the NCAA Tournament.

Ole Miss (23-9, 10-6) was blitzed out of the gates by an experienced Coyotes team that broke them down with fundamental passing and excellent shooting.

The Rebels fell behind by as much as 16 in the first half as they struggled to find an offensive rhythm against a stout South Dakota defense that made up for their size and speed disadvantage with strong help defense and quick rotations.

Ole Miss shot just 23-59 from the field in the loss, failing to make any inroads against the Coyotes’ relentless defensive pressure.

Shakira Austin played her worst offensive game in an Ole Miss uniform, posting just nine points on 3-16 shooting from the field. She found other ways to impact the game despite her offensive struggles, hauling in 11 rebounds and blocking three shots in the loss.

She failed to establish herself against South Dakota’s Hannah Sjerven, who got the better of the Ole Miss star on both ends of the floor en route to a 20-point, seven-rebound performance.

The 6-foot-2 center used her excellent touch around the rim to finish tough looks over the top of the Rebels defense, knocking down all seven of her attempts from the field.

Angel Baker was the only Ole Miss player in double-figures, posting 23 points on 8-19 shooting off the bench. She single-handedly kept the Rebels in the game through the first two-and-a-half quarters before the Coyotes went on a 7-0 run late in the third quarter to push their lead back out to 15.

Ole Miss falls in the first round of the tournament for the fifth time in their last six appearances. The Rebels conclude an historic season with a disappointing postseason performance, coming up well short of their own lofty expectations.

Head coach Yolett McPhee-McCuin’s squad must now reload in the offseason as they attempt to secure back-to-back NCAA Tournament appearances for the first time since 2004-2005.