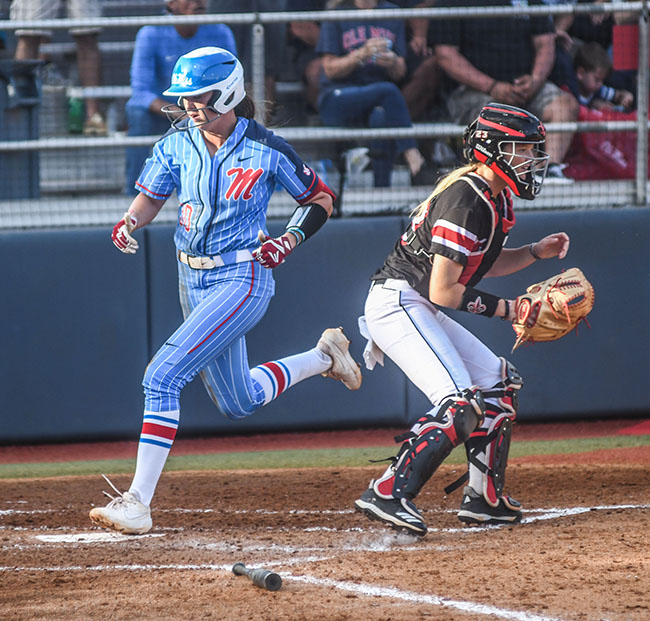 Mississippi's Abbey Latham (30) scores against Louisiana-Lafayette at the Ole Miss Softball Complex in Oxford, Miss. on Sunday, May 19, 2019. The Rebels were swept by Mississippi State this weekend after a 21-4 start to the season. (Bruce Newman, Oxford Eagle)

Ole Miss softball was swept by Mississippi State on the road this weekend in their first SEC series of the 2022 season.

The Rebels (21-7, 0-3 SEC) entered the weekend winners of twelve straight, but could not slow down a Bulldogs’ lineup that scored 22 runs in the series.

Ole Miss enjoyed excellent starting pitching throughout non-conference play, but their starters surrendered 16 runs in a combined 8 1/3 innings in their first conference action of the year.

Junior Brooke Vestal led the Rebels with a 0.50 ERA entering the series, but was rocked in Saturday’s contest to the tune of six runs in just 1 1/3 innings of work.

The New Braunfels, Texas native hit three batters in the first inning as she struggled to find the strike zone. The Bulldogs plated four runs in the first, and a two-run home run from Mississippi State’s Matalasi Faapito in the second ended Vestal’s night on the mound early.

The Rebels’ lineup did not offer much support for the pitching staff either, as Ole Miss scored just three runs in the final two games after putting eight on the board on Friday night.

They put on their worst offensive performance of the season on Sunday, as sophomore utility infielder Aynslie Furbush’s single in the top of the seventh broke up a no-hitter for Mississippi State’s Kenley Hawk.

The Rebels went 1-for-21 at the plate in the series finale, managing just two walks and striking out four times.

Senior leadoff hitter Tate Whitely played well in the first two games of the series, recording four hits and scoring three runs in five at-bats. She went cold on Sunday however, as she failed to reach base in a game for just the sixth time this season after going 0-for-2 with a strikeout.

Senior star Abbey Latham, who entered the weekend hitting .293 with 14 RBIs and two home runs, went just 1-for-7 in the series with four strikeouts.

The Rebels’ 21-4 record entering the series was tied for the best start through 25 games in program history, but they must now regroup after a disappointing performance on the road in Starkville.

Ole Miss will return home to face No. 16 Missouri for a weekend series starting on Friday at 8 p.m. at the Ole Miss Softball Complex.