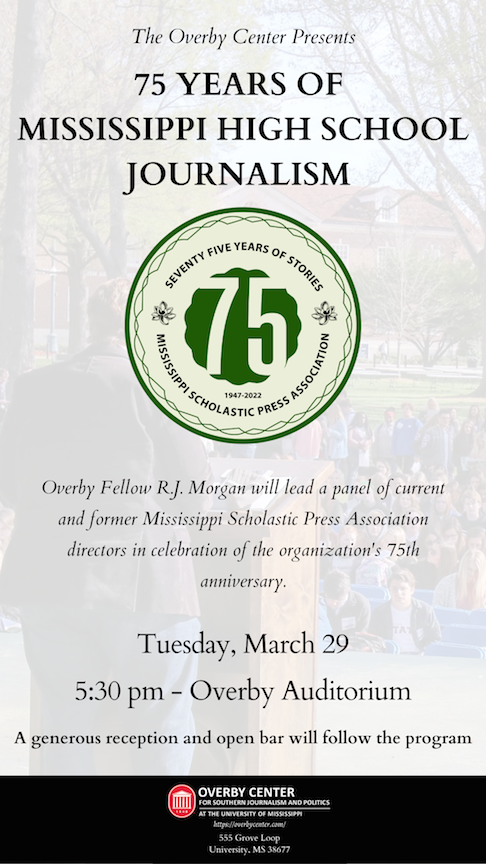 Beth Fitts, Robin Street and Charlie Mitchell will join Morgan on the eve of MSPA’s 75th anniversary spring convention to discuss the organization’s history, importance, and future in the Overby Center auditorium.

“Dating all the way back to the 80s, those are the people who have pretty much run MSPA,” Morgan said. “We should have a pretty good breath of knowledge on stage.”

Started by founding chair of the journalism department Gerald Forbes in 1947 as the  “University of Mississippi Press Institute,” MSPA began as a two-day conference held in the spring semester with the goals of helping students improve their high school publications and attracting them to the Univeristy of Mississippi. Seventy-five years later, those goals remain unchanged.

“MSPA is a chance to have a day where high school journalism students from all over the state can come together and get excited about what it is they do and communicate with other scholastic storytellers just like them,” Morgan said. “They return home with some new skills, but also a newfound energy to finish out the school year.”

Morgan is an Overby Fellow and instructional professor at the university, as well as the current director of MSPA. He started as director in 2013 and has made many changes to improve MSPA, including the addition of a state-wide fall convention held at the University of Southern Mississippi and the reorganization of the annual Best of Mississippi contests to honor more students.

Morgan believes that anyone with a history in high school media production or an interest in professional communication should attend the event.

“Lots of high school journalists go on to be something other than a reporter,” Morgan said. ”What scholastic journalism teaches is how to stay organized, how to meet deadlines, how to go talk to people in a way that gets them to tell me the information I want to know, etc. All those skills transfer to other areas of your life. MSPA has played in a role in that process for so many students over the years, and that’s something worth celebrating.”