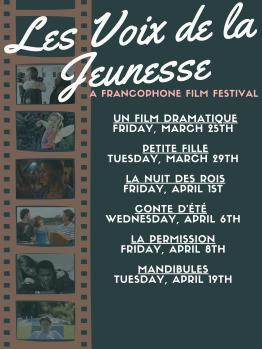 Conte d'ete (A Tale of Summer

La Permission (The Story of a Three Day Pass)

Experience a whole new world of film through the French language! The University of Mississippi Department of Modern Languages will host the Francophone Film Festival starting on March 25, on campus at Lamar Hall at 6:30 p.m.

“This is a truly inclusive event, open to film buffs and moviegoers alike in our community, who can finally see a movie together in a theater like we did pre-pandemic,” said French Professor, Dr. Anne Quinney. “We are fortunate to have local experts on the films’ themes to provide brief introductions. All of our films are subtitled and we’re using the recently-renovated classrooms in Lamar with comfortable seating and state of the art equipment so we expect a great turnout!”

The department received a nationally competitive grant from The French-American Cultural Exchange in Education and the Arts, a nonprofit organization dedicated to supporting French-American innovative cultural and educational projects. The university was one of the 35 universities who received the grant.

Since 2016, this is the second time the department has received the grant. It’s contributed through FACE Foundation’s Albertine Cinémathèque program through the Cultural Services of the French Embassy in the United States, the Centre National du Cinéma et de l’Image Animée and the Fonds Culturel Franco-Américain.

“The team has worked hard and can’t wait to introduce a series of Francophone films to our community,” said French Professor, Dr. Sara Wellman. “We are grateful for the additional support provided by the Croft Institute for International Studies and the Department of Modern Languages.”

The festival will introduce six films for the next three weeks of all genres, including drama, romance, comedy and more.

Un film dramatique (A Dramatic Film), a lively portrait of the first class to attend the school, filmed over the course of four years, will show Friday, Mar. 25 in Lamar 131. Commissioned as a dedicated artwork for the newly constructed Dora Maar middle school on the outskirts of Paris, the group of 21 middle schoolers discuss the drama of their daily lives and experiment with cameras and equipment. They are the film’s subjects, and also its makers.

Showing on Tuesday, Mar. 29 in Lamar 326 is Petite fille (Little Girl), a moving portrait of 7-year-old Sasha, who has always known that she is a girl. Sasha’s family has recently accepted her gender identity, embracing their daughter for who she truly is while working to confront outdated norms and find affirmation in a small community of rural France.

La Nuit des Rois (Night of the Kings) tells the journey of a young man who is sent to “La Maca,” a prison in the middle of the Ivorian forest ruled by its inmates. Astradition goes with the rising of the red moon, he is designated by the Boss to be the new “Roman” and must tell a story to the other prisoners. La Nuit will show on Friday, April 1 in Lamar 131.

Based on events from Rohmer’s youth, Conte d’été (A Tale of Summer) follows amateur musician Gaspard  to a seaside resort in Dinard, on the coast of Brittany. There, each of three women offers the possibility of romance, but Gaspard’s inability to commit to just one puts all of his chances at love in jeopardy. Conte d’été will show on Wednesday, April 6 in Lamar 131.

Unable to break into a segregated Hollywood, Van Peebles decamped to France, taught himself the language, and wrote a number of books in French, one of which, La Permission (The Story of a Three Day Pass), would become his stylistically innovative feature debut. Turner, an African American soldier stationed in France, is granted a promotion and a three-day leave from base by his casually racist commanding officer and heads to Paris, where he finds whirlwind romance with a white woman —but what happens to their love when his furlough is over? La Permission will show on Friday, April 8 in Lamar 131.

To end off the festival on a light note, UM will show Mandibules (Mandibles) on Tuesday, Apr. 19 in Lamar 326. When simple-minded friends Jean-Gab and Manu find a giant fly trapped in the boot of a car, they decide to train it in the hope of making a ton of cash.

For more information or would like to see the trailers, visit modernlanguages.olemiss.edu/frenchfilms/.