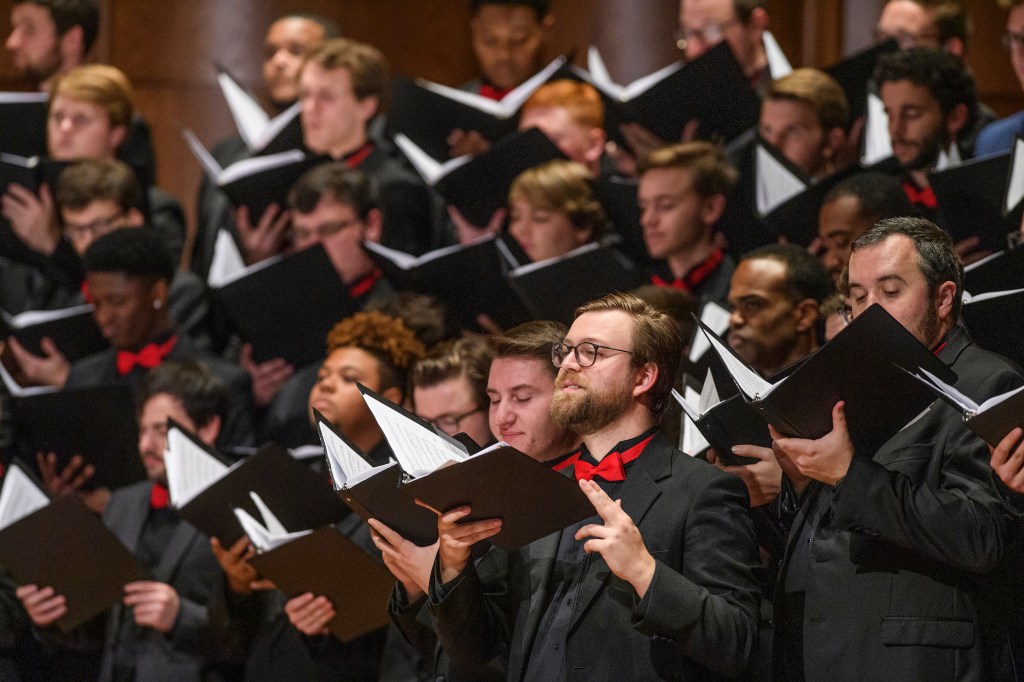 University of Mississippi Choirs members will sing with the Memphis Symphony Orchestra and Memphis Symphony Chorus for a production of Beethoven's 'Ode to Joy' on March 25 at the Gertrude C. Ford Center for the Performing Arts. Thomas Graning/Ole Miss Digital Imaging Services

An elegant evening of classical music awaits Friday (March 25) at the University of Mississippi’s Gertrude C. Ford Center for the Performing Arts.

The UM Choirs, under the direction of Donald Trott and Elizabeth Hearn, will join with the Memphis Symphony Orchestra and Memphis Symphony Chorus to perform Beethoven’s Symphony No. 9 in D Minor, Op. 125 (“Ode to Joy”). Michael Markowski’s composition “Joyride” will open the program.

The concert begins at 7:30 p.m. Tickets, which range from $20 to $30 each, are available through the UM Box Office. To buy tickets, click here.

“The Beethoven Ninth Symphony has become the world anthem of hope for humanity and provides the perfect celebration and healing for these times,” said Julia Aubrey, Ford Center director. “Robert Moody commissioned celebrated composer Michael Markowski to rearrange his composition ‘Joyride’ in 2012 – a perfect pairing with the Ninth.”

“The piece is stunning, with a jubilant, youthful spirit, beautifully blended with Markowski’s talent for creating imagery with sound,” Moody noted on the orchestra’s website.

Beethoven’s Ninth is a celebrated piece, the first symphony to incorporate vocalists and also one of the longest symphonies ever written. The main body, which has become widely known through its use in various media, is centered around the text of Friedrich von Schiller’s “An die Freude,” perhaps better known as “Ode to Joy.”

The vocals will be provided by both the UM Choirs and the Memphis Symphony Chorus, directed by Lawrence Edwards. Featured vocalists are Laquita Mitchell, soprano; Taylor Raven, alto; Limmie Pulliam, tenor; and Joshua Conyers, baritone.

Markowski originally wrote “Joyride” in 2005, when he was a high school student in Mesa, Arizona.

“Our symphonic band had been invited to play at Carnegie Hall in New York City, and my band director, Jon Gomez, proposed the idea of writing a short celebratory work to commemorate the occasion,” the composer recounted on his website. “As I remember it, he said, ‘It would be cool to blend something joyful, something traditional – say, Beethoven’s ‘Ode to Joy’ – with something more contemporary – like John Adams’ ‘Short Ride in a Fast Machine.'”

Markowski completed a first draft of this classical mashup in just 10 days, and it has become a popular accompaniment to Beethoven’s Ninth.

Nancy Maria Balach, chair and professor of music, said she is thrilled that this collaboration is being supported and part of the university’s Artist Series.