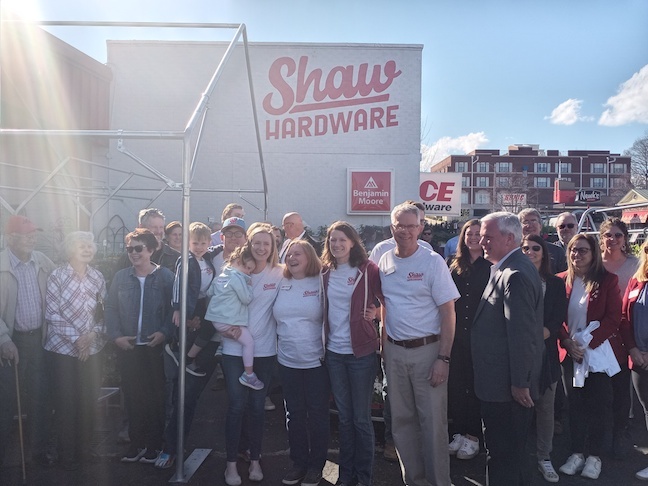 The Shaws unveiled a new mural painted by Katherine Butler of Red Window Communications on the front of their building that was planned to mimic the mural on their back wall. Rebranding has been taking place at the local business since early January with the launch of a new website, but the Shaws invited the public to celebrate the official rebranding on Thursday afternoon with a barbecue and a small giveaway event.

The local business has been a fixture in Oxford for over 70 years. It began back on the Courthouse Square as Sneed and Shaw Hardware under the co-ownership of Payne Sneed and David’s grandfather Parham Shaw. Now decades later, David can rename the store he and Susan put their hard work and love into and start a new chapter.

David thanked the crowd for coming out to the ribbon-cutting and for their continued support.

“Our business is a little different from some of the other ribbon cuttings,” he said. “We’ve been here for a long time, so this is a thank you for coming and a thank you for the business for sure.”

Quentin Brewer, chairman-elect of the Oxford-Lafayette County Chamber of Commerce, stated the Shaws invest heavily in the community and have provided jobs for 20 residents.

“Small businesses like this are the backbone of our community,” Brewer said during the unveiling event. “There’s a reason why Oxford is the way it is. This particular business is one where you can always feel free to walk in and know you’re going to be greeted with a smile, pointed in the right direction and you’re going to be given expert advice.”

Before the unveiling of the mural, Susan gave words of thanks to their workers and to the community at large for their support.