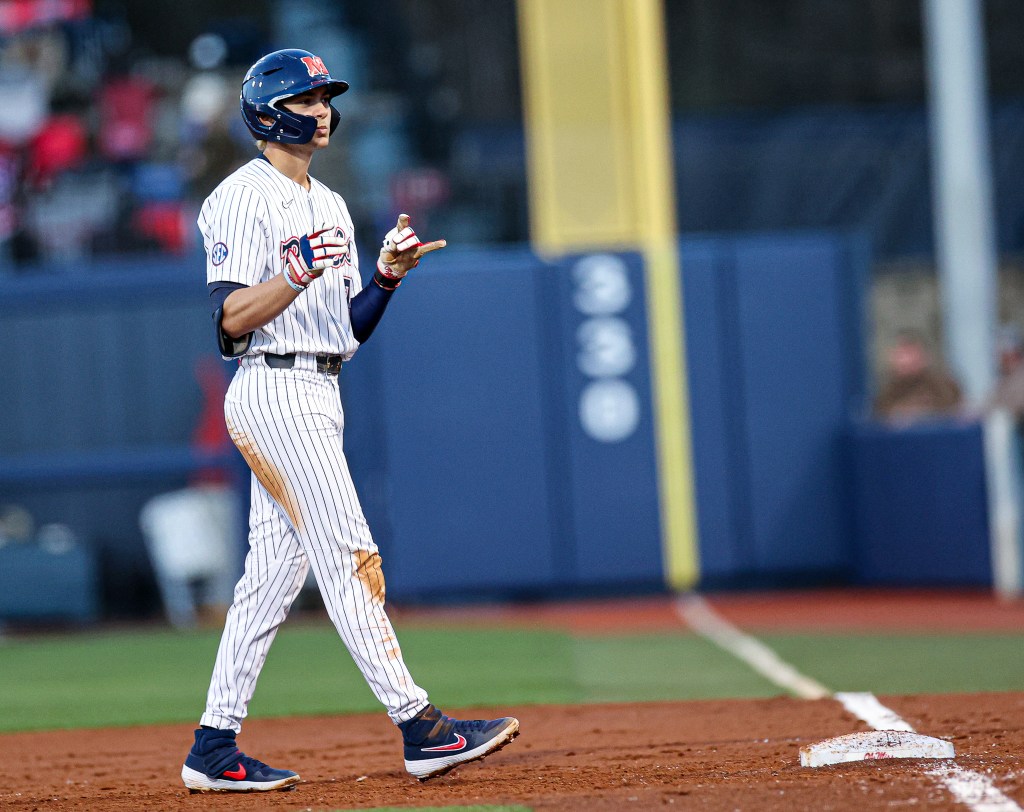 Ole Miss shortstop Jacob Gonzalez gestures to the dugout after a base hit in the Rebels' 11-8 win over Memphis on Wednesday, March 23, 2022. (Josh McCoy/Ole Miss Athletics)

OXFORD, MISS — Ole Miss suffered their second straight loss to Tennessee on Saturday night as they were unable to muster any offense against Tennessee starter Chase Dollander.

The Rebels managed just three hits against Dollander as the sophomore righty threw 6 1/3 scoreless innings to get the win. They were nearly shut out in each of the first two games against the Volunteers as they struggled to find a groove against back-to-back dominant performances on the mound.

Ole Miss did not manage a baserunner until the third inning, and did not record their first hit until senior centerfielder Justin Bench drove a leadoff double into the gap to kick off the fourth.

“We’ve kinda came out laid back both times… only a few guys have shown some dog and we just gotta have everybody if we’re gonna win,” said junior catcher Hayden Dunhurst.

They could not drive runners in even when they did get them on base, as they stranded five runners on base through the first five innings.

“Tonight we had a couple opportunities in the first five innings or so with runners on third base and less than two outs but we couldn’t get a runner in,” Bianco said.

Ole Miss fell behind 10-0 before senior first baseman Tim Elko blasted a two-run shot over the centerfield wall to break up the shutout.

They added another run in the bottom of the ninth on a solo home run by sophomore DH Kemp Alderman, his second hit of the night. They could not overcome the massive early deficit however as they eventually fell 10-3.

Sophomore Jack Dougherty suffered the loss on the mound after giving up six runs on eight hits in 3 2/3 innings of work. The righty pounded the zone all night, but the Volunteers continued to swing the bats well as they scored double-digit runs for the fourth straight game.

“I thought [Dougherty] competed well. I thought the first inning it was just some bad fortune… but Jack competed like he always does,” said Bianco.

The Rebels finished the night with just five hits in 35 at-bats. Every player in the lineup struck out at least once as they combined for 15 punchouts as a team.

The Volunteers won their 14th consecutive game as they continue to light up scoreboards across the SEC.

“They’ve been terrific, it’s hard to argue with what they’ve done besides a couple errors. They’ve been really, really good,” Bianco said.

Ole Miss (16-6, 2-3 SEC) has now dropped five out of their last eight after starting the season 13-1. They will try to get back on track tomorrow in the final game of the series.