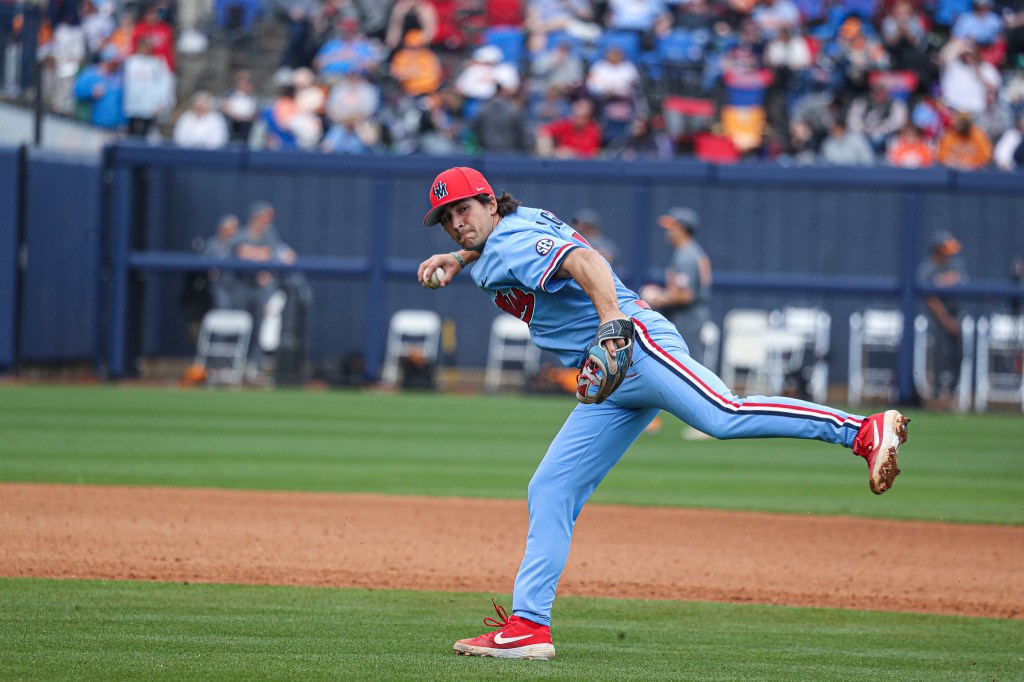 OXFORD, MISS — Ole Miss dropped their third straight game to Tennessee on Sunday as they finished on the losing end of a sweep for the first time since May 2019.

The Rebels (16-7, 2-4 SEC) managed just three hits against Tennessee starter Drew Beam as the freshman righty cruised through the lineup for nearly three complete turns before handing the ball over to the bullpen.

“I think it was a rough weekend for all the offense,” said head coach Mike Bianco. “Sometimes the guys on the other side are really good… I can’t remember a series where all three starters went that deep into a game against us.”

Junior righty Derek Diamond, who began the season as the Friday starter before being relegated to the Sunday spot after a series of shaky performances, pitched well against one of the most productive lineups in the country, giving up three runs on six hits in 4 2/3 innings of work.

“He did his job really well, really filled up the zone,” junior catcher Hayden Dunhurst said of Diamond’s performance. “He did really good locating his fastball today. We worked in a lot on their hitters and he did a really good job locating in early in the innings and I think that was a big deal.”

He did not receive any support from the offense however as the Rebels mustered just two baserunners through the first seven innings.

Ole Miss went down in order in six out of nine innings as they fell behind 4-0 after the first six innings.

They finally put some hits together in the eighth inning as a pair of singles from sophomore DH Kemp Alderman and senior leftfielder Hayden Leatherwood put runners in scoring position for just the second time in the game.

With runners on first and second and one out, Dunhurst crushed a three-run homer over the wall in right-center field to make it a 4-3 ballgame.

“I saw changeups and sliders, about four or five of them, and then finally got a fastball,” Dunhurst said. “I had my foot down early and the plan was just don’t miss a fastball.”

The Rebels were unable to complete the rally however, as they managed to get runners on first and second in the bottom of the ninth before Dunhurst struck out swinging at a pitch in the dirt to end the game.

“Games like that are hard,” said senior reliever Brandon Johnson. “I guess the best way to [move on] is learn from it, you can’t really just shake it off. Obviously you gotta get ready for the next game but [you have to] learn from your mistakes, learn from things we did wrong this week, and hopefully we can grow from that.”

Ole Miss struggled to generate offense all weekend long, scoring just seven runs between the three games while surrendering 25. The top of the Rebels’ lineup combined to go 2-for-35 in the series with 16 strikeouts in the series.

The loss marked the sixth defeat for the Rebels in their last nine games. They were outmatched all series long by a Tennessee team that outplayed them in virtually every facet of the game.

“That’s a really good team over there,” Johnson said. “We respect them, I mean obviously we think that’s the best team in the country and they showed that. We have all the respect in the world for them.”

“They’re as complete a team as I’ve seen,” Bianco said. “When you talk about three starters like that, some key guys out of the bullpen, and then to match it up with a really, really good offense… that’s a really good team in the other dugout.”

Ole Miss will try to get back on track Tuesday when they host North Alabama for a midweek contest before traveling to Lexington next weekend to take on Kentucky.