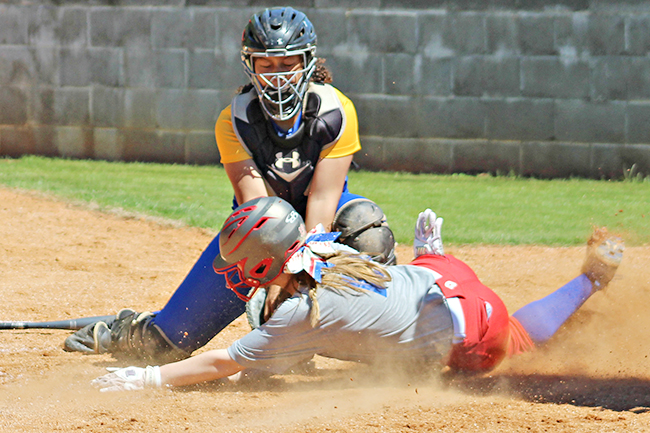 Oxford catcher Addie Shorter tags out Warren Central’s Kallie Page at the plate in the second inning of their their MHSAA Class 6A softball playoff game in Vicksburg, Miss. on Saturday, April 20, 2019. . (Ernest Bowker,The Vicksburg Post)

TUPELO, MISS — Oxford softball put on an offensive show on Thursday with a 16-8 win over Tupelo to improve to 4-0 in district play.

The top of the lineup was especially productive for Oxford, as the 2-3-4 hitters for the Lady Chargers each recorded at least three hits in the blowout victory.

Catcher Addy Shorter went 3-for-3 out of the two-spot with a home run, a double, four RBIs, three runs scored and two stolen bases.

Shortstop Claire Wicker put together a four-hit performance as she went 4-for-4 with three RBIs and three runs scored.

The home run marked her sixth of the season as the sophomore continues to rake in district play. Gillis is now batting .390 with 27 RBIs in 17 games after the three-hit performance on Thursday.

Centerfielder Mhina Balthrop also left the yard in the win, blasting a two-run home run for her only hit of the night.

Oxford now turns their attention to Lafayette as the Lady Chargers take on the Commodores on Tuesday night for the second time this season. The Commodores came away with an 8-5 victory on Feb. 15, but Oxford will look to even the series and extend their winning streak to four games with a victory over their crosstown rivals.