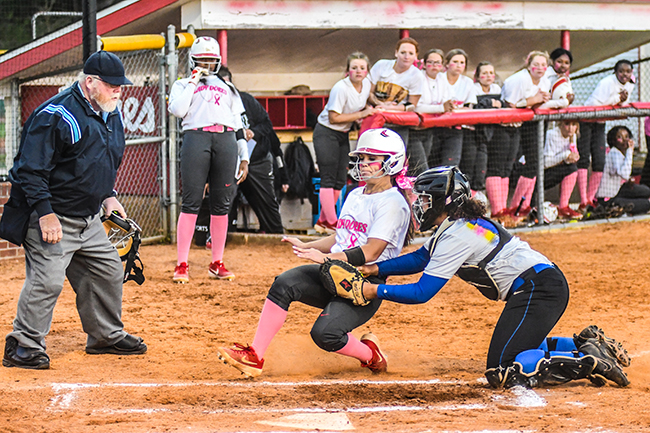 OXFORD, MISS — Lafayette softball fell 11-2 to Lake Cormorant on Thursday as the Commodores dropped their first district game of the season.

The Commodores (7-8, 2-1 Region 2-5A) gave up eight runs in the top of the first to fall behind the eight ball early. They were plagued by errors in the opening frame as they allowed six unearned runs to cross the plate.

“[It was] just the defensive miscues,” said head coach Greg Lewis. “We dropped three fly balls, two fly balls on the infield, then had another play on the infield where we could’ve made an easy out.”

The Commodores committed three errors in the first inning to fall behind the eight-ball early, and were not able to generate much offense of their own against a Lake Cormorant team that played their best game of the season.

“We just haven’t figured out how to be a team that can come back from a deficit,” Lewis said. “We fell behind early, 6-0, then all of a sudden it’s 8-0, and we just never could answer after that.”

Those defensive miscues have been the achilles heel for the Commodores all year as Thursday’s defeat drops them below .500 on the season.

“We looked great against Cleveland the other night, made every play. If you go back through all of our games, if we field .975 or .980 then we win and if we go into these first two innings and boot a few we lose,” said Lewis.

Catcher Tashika Carothers provided a spark in the bottom of the first with a line-drive homer to left that skirted over the wall and made it an 8-1 ballgame.

The Commodores were not able to muster much beyond that, as they combined to go 1-18 in the final six innings of play. They scored their only other run of the night in the fifth inning on an RBI double from outfielder Morgan Briethaupt that scored shortstop Morgan Manscoe from second.

“Just credit the pitcher,” said Lewis. “She did a very good job of spinning the curveball, keeping it out and keeping it low. I felt like we were gonna get it then every once in a while she’d throw that riser, get it up in our face a little bit and we would go for it.”

Lafayette hosts Oxford on Tuesday night in the second matchup of the season between the crosstown rivals. The Commodores came away with an 8-5 win back on February 15, and will try to get back on track with a key win over the Chargers.