Attending the Masters was an incredible experience 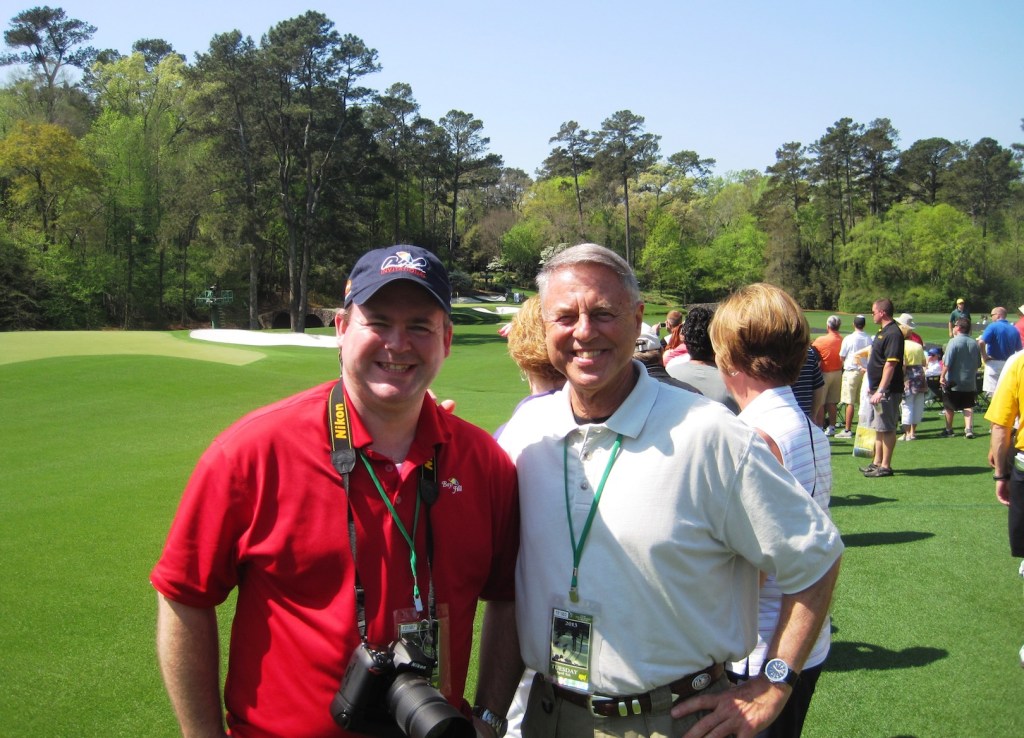 We saw the swing but were far enough up the number one fairway that we couldn’t hear the contact or see the ball.  Suddenly, people around us began to duck as Freddie’s Couples’ tee shot grazed my arm and sailed into the rough. Minutes later, Couples playing with Tiger Woods was standing inches away joking with we patrons, then hit a fabulous shot through the pines onto the first green.

Weeks earlier, son Stephen (then Assistant Professor of Pharmacy Practice at Samford University in Birmingham, Alabama), called, he had two tickets for the Tuesday, April 9, 2013, 77th Masters practice round at the Augusta, Georgia National Golf Club and asked if I wanted to go with him … YES!  Monday, April 8, I drove to Birmingham, picked Stephen up at work, and took I-20E a little over two hours to Atlanta for the night (less driving and much cheaper than Augusta hotels).

Tuesday dawned clear, and as the sun peeked over the horizon, we were well on our way.  Three hours later, we took Augusta exit 200, followed the well-marked route, and parked for free in a grassy field a hundred yards from the Golf Club on an almost cloudless day that would reach 80 degrees with cool breezes. We were at the Masters for the first time!

The large Rolex clock above the numerous airport-style screening stations indicated 9:10 am.  There is a lengthy list of rules and items banned from the Masters, including cell phones – cameras were allowed because it was a practice day, but a “no-autograph” policy was undeviating.  Any infraction of these rules would result in one’s pass being instantly revoked and banned from attending the Masters for life.

The first Masters began on March 22, 1934, and was known as the “Augusta National Invitational Tournament” until 1939, was founded by retired golfer Bobby Jones, held as now at the Augusta National Golf Club, and won that year by Horton Smith who pocketed the “hefty” sum of $1,500 (Smith won it again in 1936).

In 1937 staff members of the Augusta Tournament began wearing green jackets so patrons could easily find them if they needed assistance and the tradition of tournament winners wearing this coveted, “Pantone Green 342” Green Jacket began in 1949 with Sam Snead being the first recipient, and from 1940 on the Masters is held the first full week of April … well, until 2020’s totally weird pandemic that moved it (so wrong) to November 12-15, won by Dustin Johnson “DJ” his first with a record 268, 20 under par.

The course is unbelievably beautiful and hilly which is not so apparent on TV.  Standing on the 18th green by the Clubhouse (the highest part of the course), one can look far down to the lowest area – Amen Corner (holes 11, 12 and 13) arguably the signature holes of the entire course. On the 12th tee (Golden Bell) golfers must tee off across famous Rae’s Creek which derailed Jordan Spieth in 2016.

Stephen threatened to kill me as I continuously poked him in the side seeing one famous golfer after another as he was taking a photo.  Standing on the 11th fairway, my hero Steve Stricker walked past a few feet away and I said, “Steve.”  No response.  “Steve Stricker!”  As he looked my way, I pointed to myself, then to Stephen, and said: “Steve Stricker, Steve Stricker,” and he cracked a huge smile that Stephen caught on film … incredible!

It was swell standing directly behind Tiger Woods as he practiced chipping onto the 17th green from the rough; near Bubba Watson as he putted on the 9th green; watching Phil Mickelson practice putting; chatting casually with Gary Player’s caddy of 25 years (Bobby); refraining from telling Brandt Snedeker as he paused in front of us on the 1st fairway, that his brother Haymes was in a class I taught at Ole Miss and that Stephen graduated from Vanderbilt as he had.

That 2013 Sunday, Adam Scott bested Angel Cabrera in a two-hole playoff by one stroke in a pouring rain on the 10th green becoming the first Australian ever to win the Masters.  The 2022, 86th Masters kicks off this Thursday, April 7.

Attending that first Masters was a dream come true – but spending quality time with Stephen for three days was, priceless!

Steve Stricker is an Oxford resident, received his Ph.D. in Counseling from Ole Miss, worked on Campus, and can be reached at sstricke@olemiss.edu.