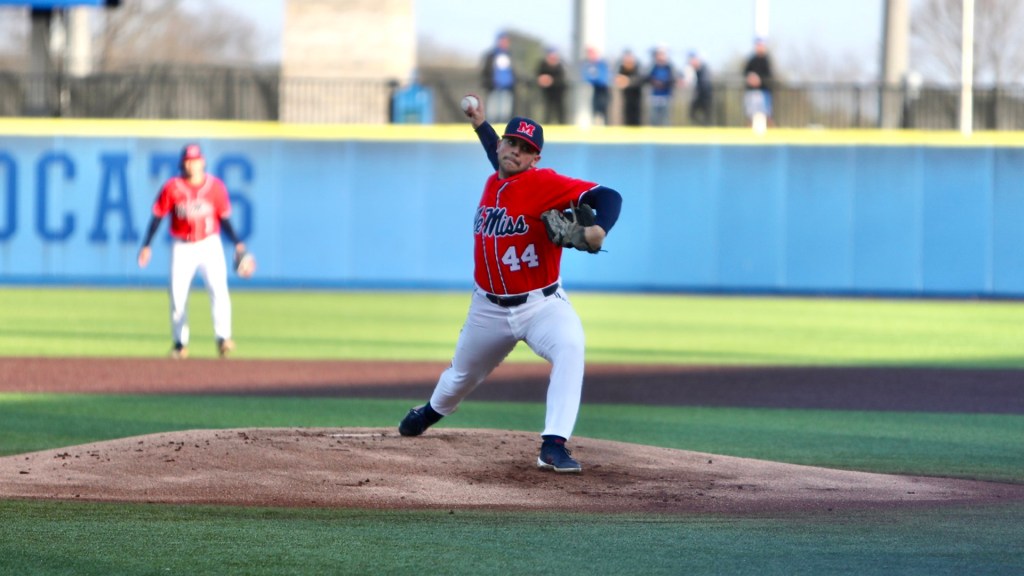 LEXINGTON, KY. — Ole Miss baseball took two out of three games on the road against Kentucky this weekend after being swept by No. 1 Tennessee at home last week.

All three responded well, posting solid outings and putting the team in a position to win.

DeLucia threw 6 1/3 innings, allowing one unearned run and striking out five before handing the ball over to John Gaddis in the seventh.

Elliot allowed two unearned runs on four hits in 4 1/3 innings of work on Saturday, and left the mound with the game tied in the fifth inning.

Washburn was the only starter to earn a decision on the weekend, allowing one run on four hits while striking out six Wildcats in five innings to earn his fourth win of the season.

The Rebels’ offense struggled in the first two games, as they came away with a 2-1 victory in a pitcher’s duel on Friday before losing 9-2 on Saturday in a game where they went a combined 2-26 from the plate over the final eight innings.

They finally broke through and put some runs on the scoreboard on Sunday, utilizing a six-run fifth inning to propel them to a 10-1 victory.

Shortstop Jacob Gonzalez and first baseman Tim Elko each registered a hit in all three games as they attempted to jump-start the offense from the top of the order.

Gonzalez went 3-for-11 on the weekend with three RBIs and three runs scored. The sophomore phenom blasted a three-run homer in the win on Sunday that helped put the game out of reach in the fifth inning.

Elko was 4-for-10 in the series, recording an RBI in each game and crossing the plate twice himself in Sunday’s rubber match. The senior captain also left the yard on Sunday, launching a solo shot in the fifth for his 11th home run of the season.

Right fielder TJ McCants bounced back from a slow start early in the weekend with a 2-for-4 performance on Sunday, recording a home run, a stolen base, three RBIs and two runs scored.

The series victory provided a much-needed boost for a team that was outscored 26-7 by No. 1 Tennessee in their last SEC series. The Rebels will look to build on their momentum as they take on Southern Miss in a midweek matchup in Pearl, Miss. on Tuesday before returning home to host Alabama over the weekend.

The Golden Eagles have won nine out of their last 11 games, and are outscoring opponents 86-44 over that stretch.

The last time the two teams matched up was in the Oxford Regional final in 2021, when Ole Miss came away with a 12-9 victory to stave off elimination.

First pitch is scheduled for 6 p.m. CT at Trustmark Park in Pearl, Miss.