Oxford sweeps Starkville to improve to 4-2 in district play 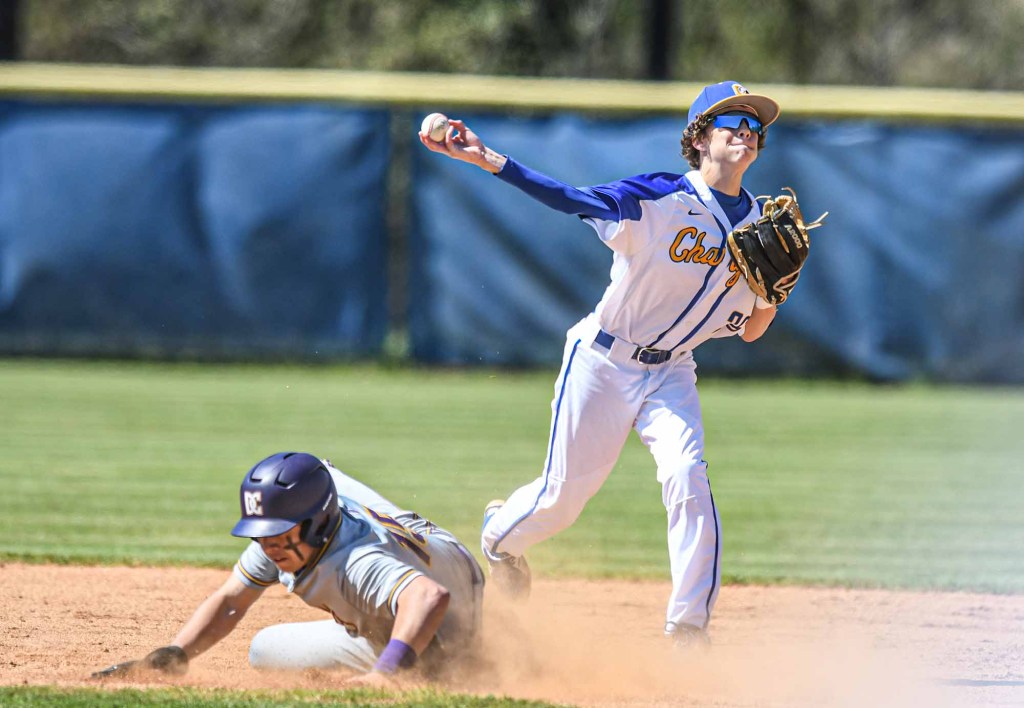 Oxford freshman Brady Maloney throws to first to complete a double play against DeSoto Central at Edwin Moak Field in Oxford, Miss., Saturday, March 19, 2022. The Chargers completed a three-game sweep of Starkville with a 12-6 victory on Saturday. (©Bruce Newman)

OXFORD, MISS — Oxford baseball picked up a pair key wins this weekend as they finished up a three-game sweep of Starkville on Saturday after dropping two out of three to Grenada in their first district series of the season.

The Chargers (14-6, 4-2 Region 1-6A) defeated the Yellow Jackets 3-1 on the road in a pitcher’s duel on Friday before returning home Saturday and securing a 12-6 victory to close out the series.

Junior catcher Campbell Smithwick went 3-for-6 on the weekend, blasting a solo home run in Friday’s contest before recording two more hits in the win on Saturday.

The Ole Miss commit is now batting .444 for the season with a team-high three home runs and 16 RBIs.

Senior first baseman Ben Goubeaux also had a big weekend, going 1-for-1 with a sacrifice fly and a pair of HBPs on Friday and following it up with a 3-for-3 performance on Saturday.

The hard-hitting slugger roped two doubles against the Yellow Jackets on Saturday, driving in three runs and crossing the plate once himself in the victory.

Sophomore Brady Stinnett was masterful on the mound for the Chargers on Friday, allowing just one run on five hits while striking out seven batters in 6 1/3 innings of work.

He also put in work in the batter’s box, crushing a grand slam in the second inning on Saturday to give Oxford a 6-3 lead.

Oxford plays one final district series against Tupelo next week before finishing up their regular season with home games against South Panola, Saltillo and perennial powerhouse Lewisburg.

The Chargers must win their series against the Golden Wave in order to secure the top spot in the region and clinch a bye in the first round of the playoffs.

They went 0-3 against Tupelo last season, including back-to-back losses that knocked them out of the playoffs in the first round.

Oxford has lost four straight to the Golden Wave dating back to 2019, but will look to flip the script as they kick off their series on the road in Tupelo on Tuesday.