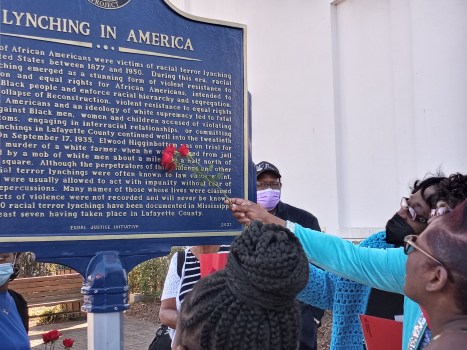 The descendant of Elwood Higginbottom, one of the seven known lynching victims in Lafayette County, read and observe the marker placed on the Oxford Courthouse lawn. The family placed roses at the plaque while it was blessed by Reverend Duncan Gray III of the Lafayette Community Remembrance Project. (Photo: Maya Martin/The Oxford Eagle) 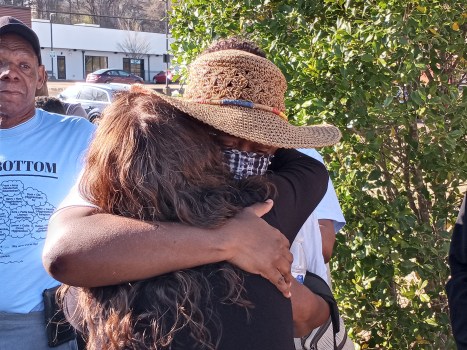 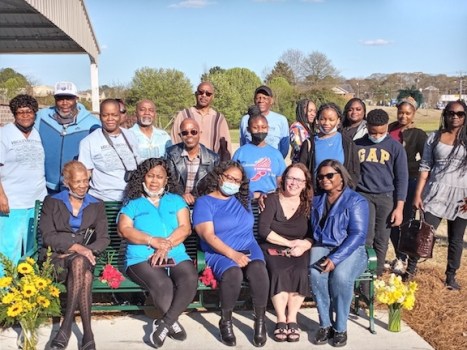 The community gathered before the City Hall building on a warm, Saturday afternoon to honor the seven African-American men lynched in Lafayette County.

The seven men — Elwood Higginbottom, Harris Tunstal, Will McGregory, Will Jackson, Will Steen, William Chandler and Lawson Patton — were accused of crimes and were not given fair trials before being attacked and murdered. Their names and a brief account of their deaths are memorialized on a marker on the Courthouse lawn, a few feet from where the dedication took place.

Members of the Lafayette County Remembrance Project, the Equal Justice Initiative of Montgomery, Alabama, the University of Mississippi Choir and guest speakers filled the ceremony with prayers, singing and speeches on racial injustice and reconciliation.

“Mississippi led the nation in the number of people who were lynched,” said guest speaker Diane Harriford. She referenced the Emmett Till Anti-Lynching Bill recently passed by the Mississippi legislature last month. “I think it 650 people between 1877 and 1950 and I’m thrilled to be associated with Mississippi now that they’re leading the country in making reparations for that.”

Harriford, a professor of sociology at Vassar College, works as a research associate for the Civil Rights and Restorative Justice Project. According to the professor, creating markers is not only a wonderful way to honor the victims but it makes amends to the families and in turn, the communities.

“There’s often a sense that there is some kind of a shame that somebody did something that made it necessary for them to get lynched, people don’t want to hear about it and we just want to forget it,” she said to the audience. “But I find that there are other people who are carrying these same secrets and we as Black people carry secrets. When these secrets come out, often that is the way to begin some kind of real healing.”

“It’s a part of the healing process,” said Higginbottom Jr. “I watched my father for years and he hated this place with a passion. He would not come here. He knew bits and pieces but he finally got a bit of closure a few years ago. I hated that he could not make it for this but at least he had some overall closure.”

In addition to markers placed on Molly Barr Road and on the Courthouse lawn, Lafayette County dedicated a bench located at the Old Armory Pavilion in E.W. Higginbottom’s honor. A smaller ceremony was held later that Saturday afternoon with the Higginbottom family and Gail Stratton and April Grayson of LCRP.

To Higginbottom Jr. the markers, benches and accompanying ceremonies are long overdue, but he is happy to see Mississippi and Lafayette County moving forward to reconcile with it’s past instead of ignoring it.

“I’m glad to see this type of change taking place,” Higginbottom Jr. said. “It’s still a lot of undercover stuff going on but this to me is a step in the right direction.”