Ole Miss searching for answers as Alabama comes to town 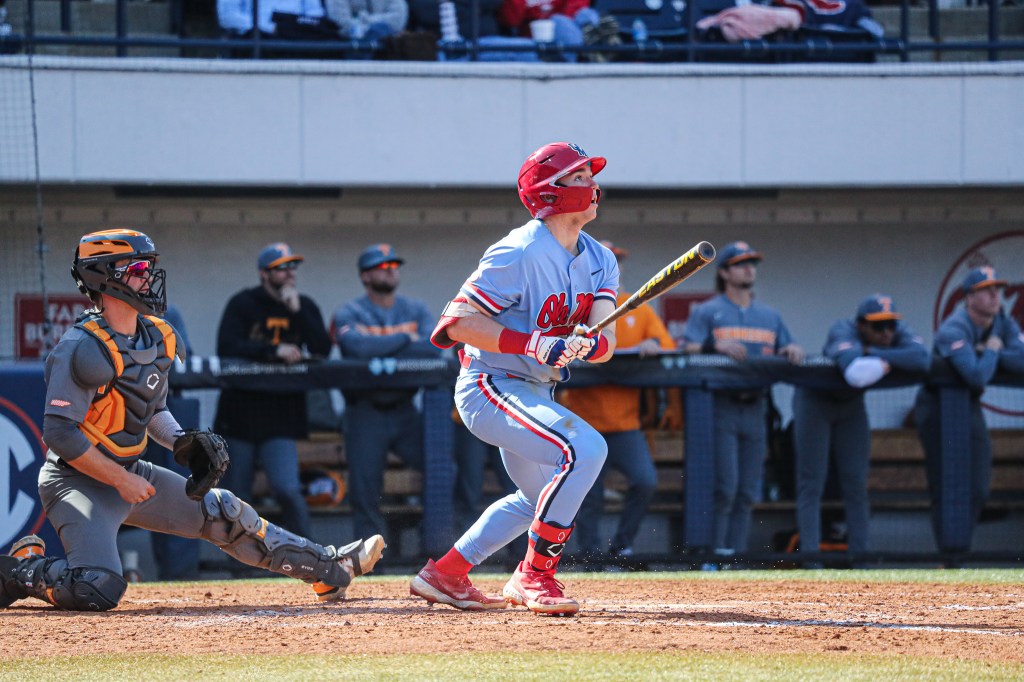 OXFORD, MISS. — Ole Miss baseball is in a funk.

The Rebels started the season 13-1, hitting the ball all over the park and beating up on inferior opponents en route to a No. 1 national ranking.

The most notable change is in the Rebels’ strength of schedule.

Ole Miss played series against Charleston Southern, Virginia Commonwealth, Central Florida and Oral Roberts in their non-conference slate. None of those teams inspire much fear in Group of Five opponents, let alone a Power Five squad with their sights set on Omaha. Central Florida is the best of the bunch, and the Knights fell to 18-11 with a loss to Florida Atlantic on Tuesday.

Since beginning SEC play, Ole Miss has faced Auburn and Kentucky on the road and Tennessee at home.

The Rebels had not won a series on the road against Auburn since 2009 before they took two out of three against the Tigers this season to start 2-1 in conference action.

They struggled mightily against No. 1 Tennessee, bringing the viability of a College World Series berth into question for the first time this year. The Volunteers swept the Rebels in Oxford, and followed that up with a sweep of Vanderbilt on the road that pushed their record to 28-1. Ole Miss may have struggled against them, but so has every other team this season.

The schedule has definitely gotten more difficult, but the Rebels are also dropping games they simply have to win if they want to make it to Omaha for the first time since 2014.

Back-to-back losses to Oral Roberts and Southeastern Louisiana in the middle of March wiped away any momentum they had built up right as they prepared for the beginning of SEC play. The bullpen, which has been a strength for the team all season, gave up seven runs in three innings in a loss to Kentucky on April 2 that broke up a potential sweep. The Rebels even jumped out to a lead over No. 18 Southern Miss on Tuesday before giving up six unanswered runs to fall behind.

These kinds of miscues are costing Ole Miss wins, and they’ll need every one they can get down the stretch as they get into the heart of their SEC schedule.

The offense has mostly held steady.

A loaded lineup full of big-time sluggers continues to smash baseballs into oblivion, but injuries have kept them from realizing their full potential.

Senior outfielder Kevin Graham has not played since March 5 after breaking a bone in his wrist that required surgery. The Rebels’ three-hole hitter was batting .308 with four home runs in 10 games before going down, and has left a massive hole in the middle of the lineup.

Star catcher Hayden Dunhurst missed six games earlier in the season with a hamstring injury. His replacement, sophomore Calvin Harris, led the team with a .500 batting average and a .722 slugging percentage before missing 10 games with an injured oblique.

The Rebels are batting .288 as a team with 45 home runs and 222 RBIs in 28 games played despite the injuries. They managed to keep the ship afloat for a while, but the absence of the big bats reared its head against an elite Tennessee pitching rotation. Ole Miss will need to get healthy and stay that way in order to keep putting points on the board later in SEC play.

The pitching is… not great

For a while it looked as if the bullpen would be the saving grace for this Ole Miss team.

There were plenty of questions surrounding the starting rotation coming into the season, and none of those questions have been answered as we enter the second month of conference play.

Junior Derek Diamond, who came into the season as the regular Friday starter, was relegated to the end of the weekend before making his debut as a midweek starter against Southern Miss on Tuesday.

Senior John Gaddis looked to be the obvious replacement for Diamond as the Friday starter after performing well early in the season, but the lefty was only used in relief against Kentucky as head coach Mike Bianco tinkered with the rotation.

Junior righty Jack Washburn has been the most consistent starter for the Rebels out of the midweek role, posting a 2.86 ERA in 28 1/3 innings of work.

No other regular starter has a ERA below 4.50, and even the relievers who shouldered the burden early in the season are starting to see their numbers slip.

Senior stopper Brandon Johnson boasted a 0.73 ERA entering Tuesday’s matchup with Southern Miss, but saw that number rise to 2.77 after giving up a three-run home run in the eighth inning.

Junior Dylan DeLucia, the go-to arm for Bianco out of the bullpen, was forced into a starting role midseason and has seen mixed results.

Ole Miss has the bats to carry them to the College World Series, but they will need to answer some of the questions surrounding their pitching staff if they want to host a Regional, let alone make it all the way to Omaha.

They will try to right the ship and answer some of those questions as they prepare to host Alabama for a three-game set this weekend. The Rebels face the Crimson Tide at 6 p.m. on Friday before playing a pair of afternoon games on Saturday and Sunday.