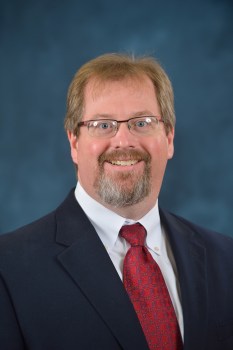 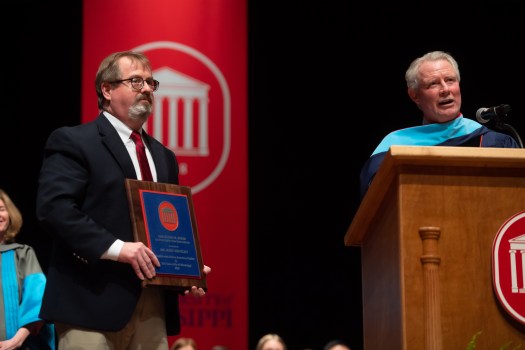 With a passion for statistics and commitment to student learning, John Bentley, professor of pharmacy administration at the University of Mississippi, is the winner of the 2022 Elsie M. Hood Outstanding Teacher of the Year Award.

“I was shocked and had some doubts when I first heard the voicemail that I listened to it multiple times,” Bentley said, referring to the message UM Chancellor Glenn Boyce left to tell him the good news. “It’s awe-inspiring. I just didn’t think I would be considered on that level.

“There are incredible people on this award list, several I have interacted with as either a student in their class or as a research collaborator. To be recognized as worthy enough to be one of them for something you really love doing, that’s pretty cool.”

Bentley, also director of the Center for Pharmaceutical Marketing and Management, was awarded the honor at the university’s annual Honors Day Convocation on Thursday (April 7) in the Gertrude C. Ford Center for the Performing Arts. In presenting the award, Boyce called Bentley “an outstanding teacher who engages, encourages and inspires his students.”

“His commitment to teaching, mentorship and helping others are qualities that exemplify the ideals of higher education and represent the excellence we aim to uphold at the University of Mississippi every single day,” Boyce said.

Bentley’s never-ending curiosity benefits the school’s graduate and professional students, as well as students across campus in fields such as marketing, psychology, accountancy, and health and kinesiology. He transforms the image of statistics being tough and helps students connect to concepts through engagement, humor, examples and, more recently, technology and real-time COVID-19 vaccine efficacy data.

“Almost every day, I still struggle with situations where I have no idea what something means, or have no idea how to perform or interpret a certain statistical analysis, but that is part of the fun,” Bentley said. “I want to work with students and show that the fun part is learning things you didn’t know before.

“It’s great to see students have that aha moment, but also watching them have success. It’s the moments where they get their first publication because of something they learned or applied from your class. It’s the moments when a former pharmacy student lets you know a small piece of their success is because they now understand or are not afraid of the biostatistics content in articles published in biomedical journals.

“To have that opportunity to help people not just learn about statistics, but about how they can actually do this is what I enjoy doing.”

Ole Miss students and faculty submit letters of nomination before the committee, composed of mostly past award winners, chooses its next recipient. The dedication Bentley provides to students across all disciplines was noted throughout his letters of support.

“Dr. Bentley also is so very giving of his time in wanting to be sure that student understanding and success is a primary goal,” one nominator said. “This time he spends after class – isn’t even his office hour time. This is how much emphasis John places on teaching, he makes sure that he is open for students who want to learn, and they definitely do want to learn from him.”

“He is quite literally one of the smartest people that I have ever worked with and incredibly giving of his time to help mentor students,” said another nominator, as Bentley served as a member of their dissertation committee. “In working with him on other manuscripts, he is incredibly helpful, thorough, and encouraging.”

Traveling back and forth to teach in Oxford and to study in Alabama, he received his doctorate in biostatistics from the University of Alabama at Birmingham in 2011. In 2015, he helped develop the Interdisciplinary Graduate Minor in Applied Statistics at UM, serving as its program coordinator for five years.

He became chair of the Department of Pharmacy Administration in 2017 before moving to the CPMM director role in July 2020.

Throughout his time at the university, Bentley has garnered multiple recognitions that include the UM Faculty Achievement Award for Outstanding Teaching and Scholarship in 2016, the pharmacy school’s Faculty Service Award in 2001 and 2015, and the Award for Excellence in Graduate Teaching and Mentoring from the UM Graduate School in 2014.

“John is so deserving of this award,” said Donna Strum, UM pharmacy dean. “He challenges pharmacy and graduate students and genuinely cares about their learning and professional success.

“He is dedicated and willing to spend time and energy with each student to help them solve a stats problem, design a research study or understand a pharmacy concept. We are so proud of him and grateful that he is on our faculty.”