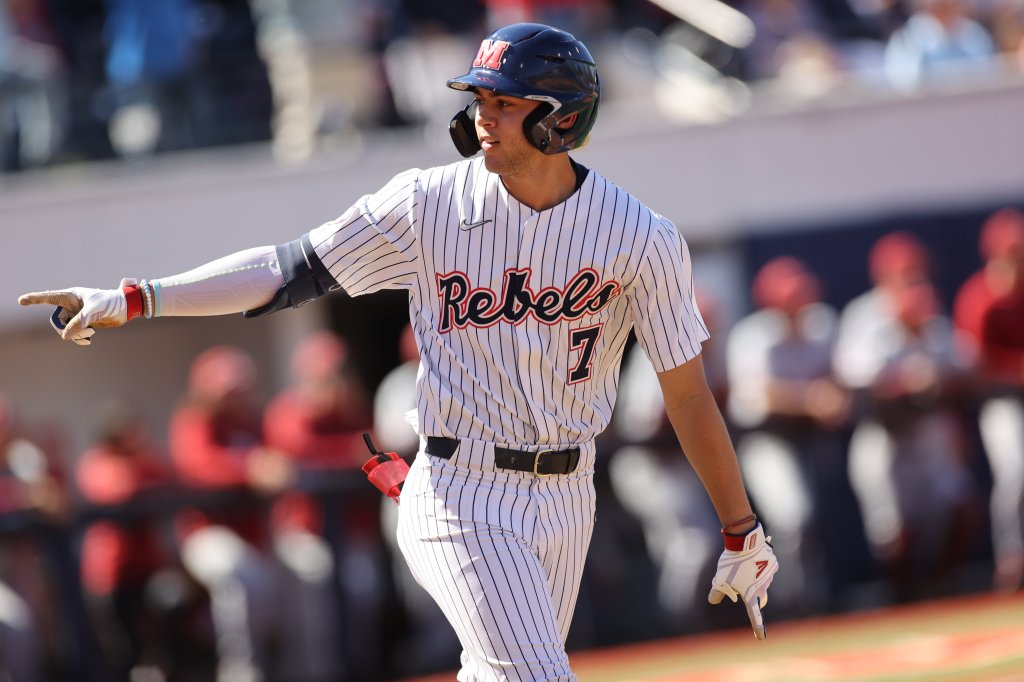 Ole Miss shortstop Jacob Gonzalez gestures to the dugout after a home run in the Rebels' 12-10 loss to Alabama on Saturday, Apr. 9, 2022. (Josh McCoy/Ole Miss Athletics)

OXFORD, MISS — No. 9 Ole Miss was unable to complete a rally in the late innings as they dropped their second straight game to Alabama on Saturday in an extra-inning, back-and-forth affair.

Bullpen implodes to give up nine runs

Ole Miss plated 10 runs on 15 hits, including five home runs, but was unable to come away with a victory as the bullpen imploded in the middle innings.

Sophomore Jack Dougherty gave up three runs in the sixth inning that brought the Tide within one after the Rebels jumped out to a 7-3 lead.

Brandon Johnson entered the game in the seventh with a runner on first and one out after a brief appearance from freshman Mason Nichols, and quickly induced a ground ball that looked like it would get them out of the inning.

The sharp grounder ate up third baseman Reagan Burford however, and he was unable to get even one out on the play as Bryce Eblin reached first just before the throw.

Johnson issued a walk to the next batter to load the bases before conceding a grand slam that gave the Tide a 10-7 advantage.

The senior stopper then surrendered a two-run blast in the top of the 10th after the Rebels tied the game in the ninth on a solo shot from senior captain Tim Elko.

The home run proved to be the game winner as the Rebels went down quietly in the 10th to fall to drop their seventh game in their last 10 outings.

“It’s been a tough week for him,” Bianco said of Johnson. “He’s our guy, he’s terrific… and he’ll be back out there.”

Ole Miss exploded for five runs in the fourth inning as they used the long ball to light up the scoreboard.

The Rebels tied the game at 3-3 with a big fly from centerfielder Justin Bench that just cleared the wall in dead center. They followed that up with a double from catcher Hayden Dunhurst and a single from second baseman Peyton Chatagnier to put runners on the corners.

Shortstop Jacob Gonzalez stepped to the plate with two outs in the inning and blasted a 3-0 fastball into the student section in right for his second home run of the day.

Hope appeared to be lost after the bullpen gave up three in the sixth and four in the seventh, but Gonzalez answered with his third home run of the day, a deep fly to right that made it a 10-9 ballgame.

The sophomore became the first Ole Miss player with three home runs in a game since Jude Voltz accomplished the feat on Apr. 2, 1999.

The blast also energized the Rebels’ dugout, providing a much-needed lift after the bullpen failed to answer the call.

They managed to capitalize on the momentum with another long ball in the bottom of the ninth off the bat of Elko that tied the game at 10 runs a piece and brought the entire stadium to its feet.

They were unable to keep the momentum going however, as a warning-track fly ball from Graham in the next at-bat sapped the energy right back out of the stands and brought the rally to a halt.

“We just need keep playing games like this,” said Gonzalez. “We lost, obviously, but it was a close game and we haven’t really played a game like this. If we keep playing like this then most of the time we’ll end up winning these games.”

Ole Miss will look to right the ship and avoid the sweep against the Crimson Tide on Sunday at 2 p.m. CT. Junior Jack Washburn will get the start on the mound as he seeks his fifth win of the season.