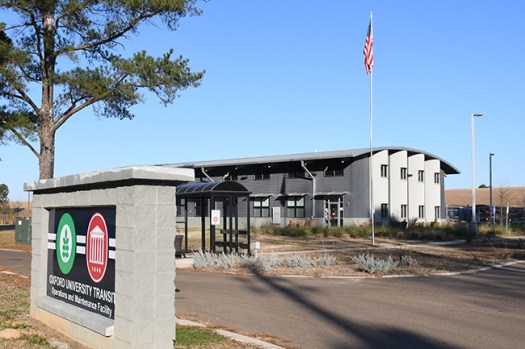 The Oxford-University Transit Maintenance and Operations Facility, in Oxford, Miss. on Thursday, December 14, 2017, is scheduled for a $500,000 renovation. 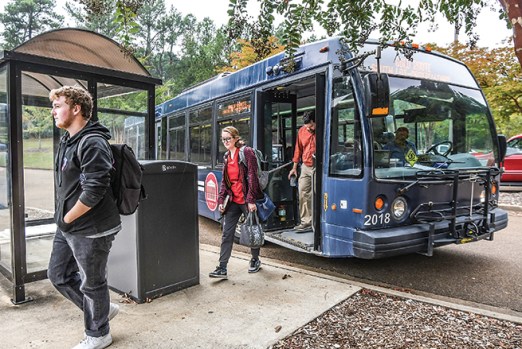 Oxford University Transit announced new improvements to its system this week, including a surveillance center and a million-dollar renovation to its facility.

General Manager Donna Zampella reported that OUT has recently completed a $1.3 million renovation to their facility introducing substantial additions to the transportation system.

The facility added offices and a conference room to their upstairs area, a new training space for the training facility, a driver’s lounge, two extra bus bays and expansions to the employee and bus parking. Zampella said the space will be needed for the additional eight buses and two vans OUT has brought into the system.

A media command center was also created with ten televisions that access the internet and Mississippi Department of Transportation cameras throughout Oxford.

“This helps us tremendously during our game days, inclement weather and any kind of accident,” said Zampella. “We can have eyes on the city before our drivers can actually approach and get there.”

The transit system’s minor changes include redesigns of its look. OUT has introduced new employee uniforms and added “Public Transit” to their signs emphasizing that the system is for public use as well as University use.

As Zampella encouraged the local community to take advantage of this service, she added that OUT is still taking steps to protect riders from COVID-19 and other airborne illnesses.

Sneeze guards installed during the pandemic will permanently stay in place, and OUT will continue to abide by Federal Transit Administration guidelines that require face masks on public transportation until Apr. 18.

Route maps were also redesigned. All eight individual maps were converted into one comprehensive map for easy convenience. Routes have expanded to include Oxford’s recently annexed areas, affordable housing complexes and a polling site.

“ … We were able to take in [a] polling site that transportation has never gone to,” Zampella said. “We’re kind of excited to add that last polling station so that we can transport people there.”

These routes can be viewed in OUT’s upcoming app that will display where the buses are in real-time. GPS systems are currently being installed in all of OUT’s buses for tracking and the app is currently in the testing phase but it is still available on the OUT website. To further increase accessibility, OUT’s services have expanded its services to 10 p.m. to serve the night crowd and people who work night shifts.

Mayor Robyn Tannehill showed her appreciation for OUT’s role in Oxford and its help with infrastructure needs. To the mayor, not many towns of Oxford’s population size have as great of a system.

“One of the things that makes Oxford such a livable community is that we have public transportation,” said Mayor Robyn Tannehill. “ … When we carry more than a million people each year from A to B, not in a car? We are affecting all of our infrastructures as well.”